Breaking
How to Run Nonprofit Marketing Ads
Entrepreneurs Are Bringing Transparency To Home Buying And...
Best Incentive To Get Vaccinated: Money, Messaging, Or...
Page Level Query Analysis at Scale with Google...
How A CIO Can Align IT With Business...
Blogger of the Month: Jo, Girl Eats World
6 Things Women In Business Know That Men...
How to Use First-Party Data for Ad Personalization
Pressing Reset—Putting A Fallen Unicorn Back On Its...
How We Went Viral: Promoting Content with Influencers,...
Blame Olympic Record Price Tag For Return To...
Apple iOS 14.5 Release: Should You Upgrade?
How to Come up with Podcast Topics and...
Why Gaming Gear Company Razer Launched A $50...
Technical SEO Implementations to Increase the Impact of...
30 Brilliant Ways to Market Your Eco-Friendly Shopify...
Home Technology Panos Panay: The Humble Heart Inside Your Microsoft Surface
Technology

Panos Panay: The Humble Heart Inside Your Microsoft Surface

“Let’s all get in the same boat, grab an oar, let’s go. I’ll bang that drum and keep our rhythm.”

Not long after Microsoft’s October product launch of three new Surface devices (the Pro, Pro X, and Laptop 3) and the announcement of the Surface Duo and Surface Neo, I sat down with Panos Panay, Microsoft’s Chief Product Officer of its Devices Group to talk about Surface, teamwork, and family. 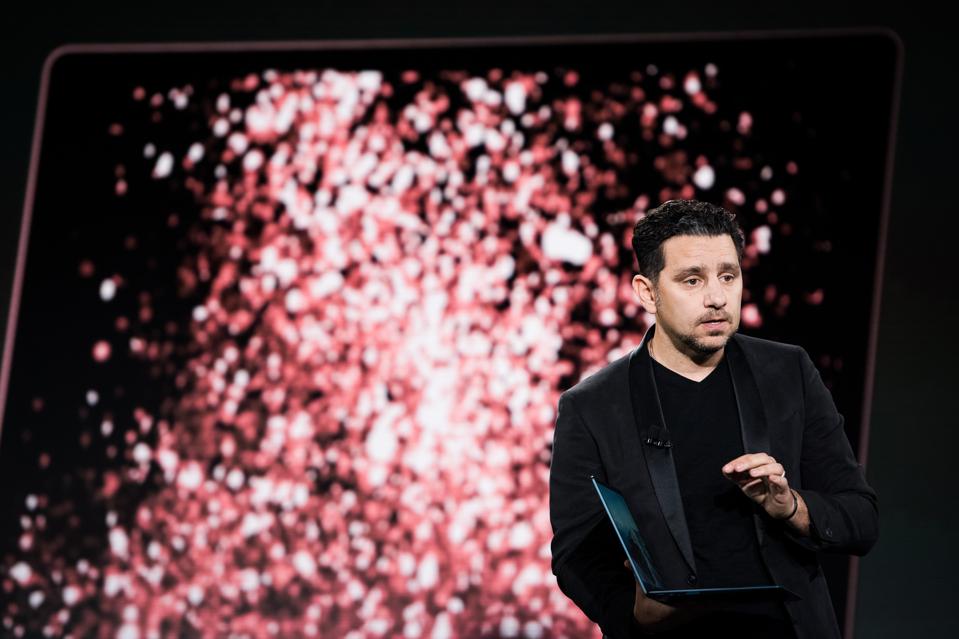 It’s a week after the three new Surface devices were launched, and the announcement of the folding Surface Duo and Surface Neo. Curiously for a modern mobile device, the Duo and Neo are not going on sale immediately, everyone will have to wait until late 2020.

“This was a big deal for me personally,” Panay tells me after a presentation to the UK media. “It was always a collective decision, but sometimes you need someone to make a call,” he explains. “It needs someone to say ‘we are willing to take the risk. It might not be easy and we might fail here, but it is a collective voice.”

It’s not just the collective voice of the Surface team, it’s the collective voice of Microsoft as a whole. It brings in Windows 10, Office 365, the cloud experience, and of course the Surface hardware. It’s not just about ‘now’, it’s about ‘next’ for Panay; “Let’s also give our customers products that help them get where they are going. Maybe they don’t know where that is. They may not always have the answer of what they need next, so let’s make products for when they get there.”

The fact that the early presentation of the Surface Duo and Surface Neo can help shape where those customers wants to go is something that many, including myself, will be quietly watching from the sidelines. 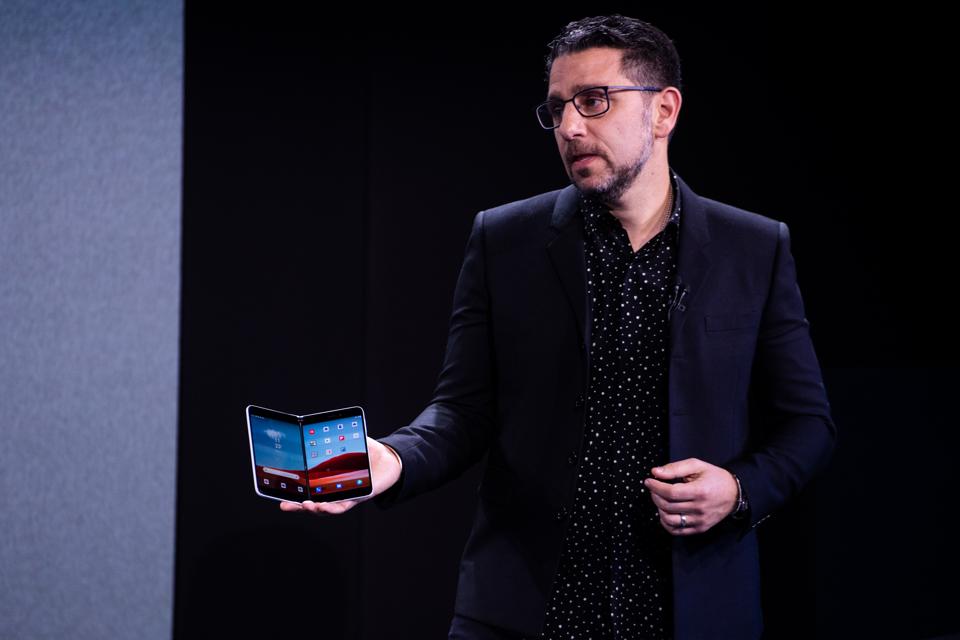 There was another first at that Surface launch in New York. Sitting in the audience were Panay’s parents.

“My Mum and Dad live in LA. He’s 87, he’s amazing. He’d never seen me present, ever, and this time around he asked. ‘I haven’t seen you and I really want to.’ It was emotional, it was special.

“In the evening we had dinner with a small subset of the team, and he joined us for dinner. He gave a talk and he said ‘my son is all about family and team, and I can see that it is a family here at Microsoft that supports each other and that makes me more proud than anything I heard today, is watching you all sit here together as a family.’ That’s what my Dad taught me my whole life, that’s what it’s about, other people and not yourself.” 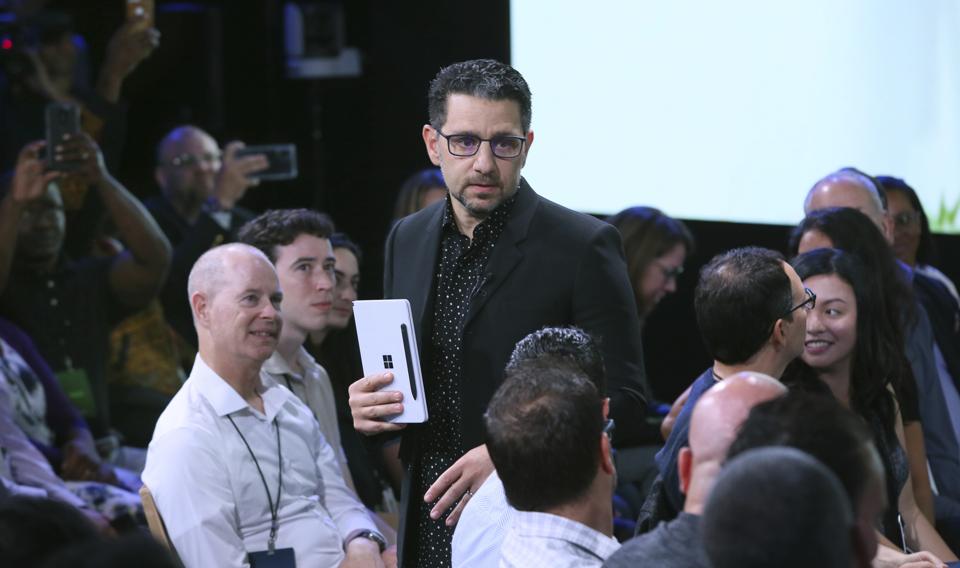 I found it interesting comparing Panos’ on-stage energy at the Surface events to this almost flat collaborative style of leadership, one who is with the team every day, who works at being part of a team and reflecting that when he speaks. How does he cultivate that ….

“We don’t sit around and express our feelings, but we have our principles and cultural values. ‘Be relentless’, ‘grab an oar’, those are two. Another is ‘be human’. Be more inclusive, listen better, and be more respectful.

“If you ask how I do it, I don’t know, but that is the reflection of how I believe, that’s so important to me.” 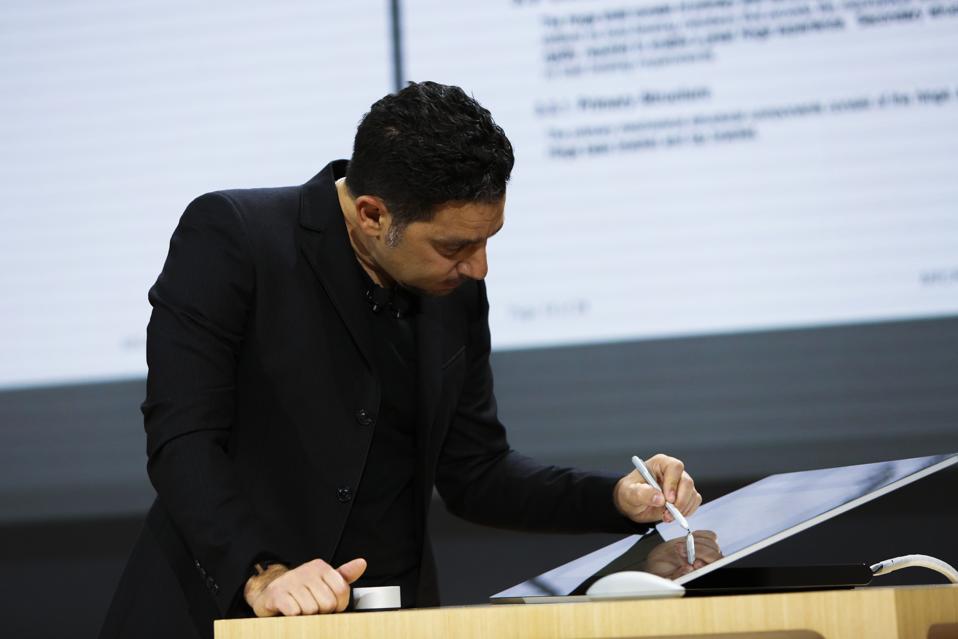 Panay is very clear on what brought Microsoft and the Surface family to where it is today. “We didn’t get here by second guessing or stopping, we got here by believing and doing.”

Once you strip away the day to day management of the Surface team, once you step back from the minutiae of Microsoft’s vision of a connected future, once you put aside the product roadmap, you see that this is the core of Panay’s drive. Ask questions as you move forward, foster an open environment, listen to the team and the public… and then make the call.