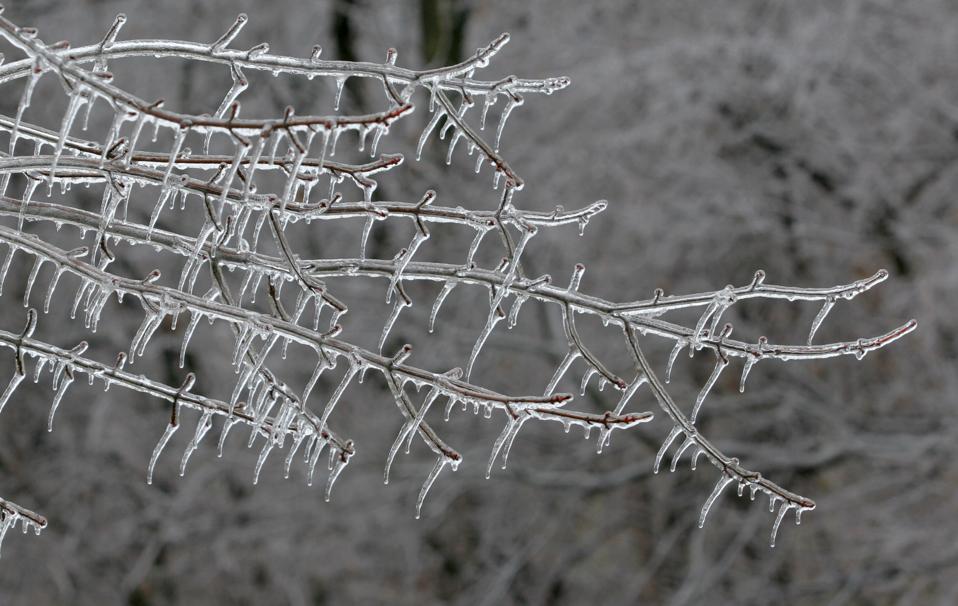 Ice hangs from the tress in Lake St.Louis, Mo on Dec 10, 2007. Commuters contended with treacherous … [+] roads Monday from the southern Plains to the Northeast as a storm spread a coating of ice and freezing rain linked to at least 13 traffic deaths.(AP Photo/Dan Gill)

A significant ice storm is possible in parts of the Northeast on Monday as a winter storm moves into the region. Ice storm warnings are in effect for the Berkshires and Catskills ahead of the potential for more than one-half of an inch of ice accretion on exposed surfaces, while lower elevations could see a mix of rain, snow, sleet, and freezing rain. The icy mix will make travel difficult or nearly impossible on untreated surfaces.

Surface temperatures will fall below freezing on Sunday night in much of the Northeast as the precipitation moves in, allowing precipitation to slowly change to a wintry mix through the day on Monday. While some areas up north will see more snow than ice, a layer of warm air just above the surface will allow precipitation to fall as freezing rain or sleet across southern New England and eastern New York. 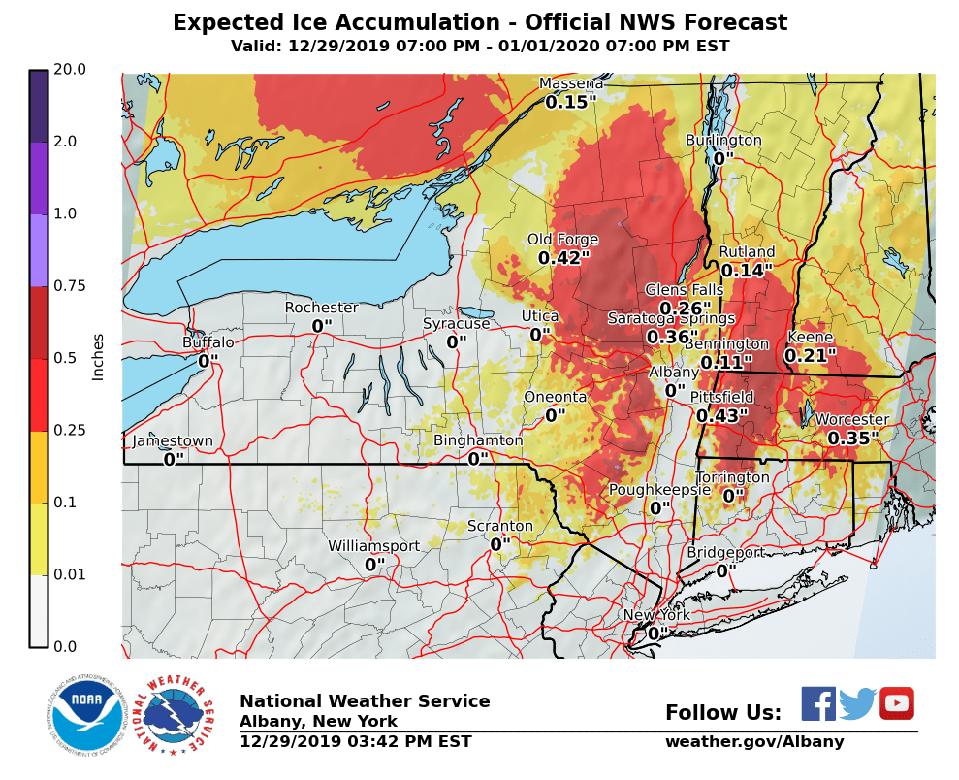 The greatest risk for icing exists over the Berkshires, Catskills, and Adirondacks. Sunday evening’s forecast from the National Weather Service calls more than 0.50” of ice from freezing rain across these higher elevations in eastern New York and western Massachusetts. Areas that see the greatest ice accretions are at risk for power outages and widespread tree damage. Communities at lower elevations, such as Burlington, Vermont, and Keene, New Hampshire, stand the risk of seeing at least a glaze of ice from freezing rain during the event.

It’s going to be breezy in many of the areas expecting freezing rain. Wind will only add stress to trees and power lines struggling under the weight of the ice. Widespread power outages are likely in areas that see significant ice accretions. It’s common sense to change travel plans and prepare for power outages ahead of an ice storm, but one easily overlooked safety tip is that it’s a good idea to remain mindful of large trees or limbs that loom over your house, avoiding those rooms whenever possible.

Freezing rain is the most serious type of winter weather. Even a little bit of freezing rain can leave a glaze of ice that makes it difficult or impossible to safely walk or drive. Ice accretions that reach 0.25” are heavy enough that the weight is too much for some tree limbs and power lines to handle. The damage grows more severe as the shell of ice grows thicker. An ice storm across the Northeast and southern Canada in 1998 produced a crust of ice more than 2.00” thick in many areas, which was enough to cause large power transmission towers to crumple as if they were made from paper.

In addition to ice from freezing rain, accumulating sleet (also known as ice pellets) is a possibility across parts of northern Massachusetts and southern Vermont and New Hampshire. Sleet accumulates like snow but often freezes into a solid slab of ice after a while, making it extremely difficult to remove accumulated sleet from sidewalks, driveways, and roads not long after the precipitation stops falling.

Heavy snow is also likely farther north where temperatures throughout the atmosphere should stay at or below freezing for most of the event. Double-digit snowfall totals are possible across interior Maine by the end of the storm.

Valentina Shevchenko Had The Best Knockout In The UFC In 2019

Pallas Is So Heavily-Cratered That It Resembles An...