Breaking
Customer Service Recovery: Six Keys To Turn Complaints...
How Becoming A Learning Organization Is Key To...
IRS Increases Enforcement On Cryptocurrency: What This Means...
Optimus Prime Finally Gets The Diaclone Update He...
No, There Isn’t A Black Hole At The...
The Fed Could Be Repeating This Key Mistake...
Japanese Lawmaker Becomes Billionaire By Selling E-Signature Services...
Communication Lessons From The Presidential Debate
4 Tips For Attracting Your First ‘Dream Client’...
Want To Generate More Sales This Holiday Season?...
Your ‘Harvest Moon’ Moment Is An Illusion: Why...
Launching A Startup Comes Down To Making A...
Google Meet’s Unlimited Calling Will Continue To Be...
The Need For Speed-Is Quantum Computing A Good...
Stock Market Crash: The End Game Approaches
Best Video Conferencing Software
Home Business Patrick Beverley Is The Christmas Gift That Keeps On Giving: ‘He Can Guard Anyone In This League’
Business

Patrick Beverley Is The Christmas Gift That Keeps On Giving: ‘He Can Guard Anyone In This League’ 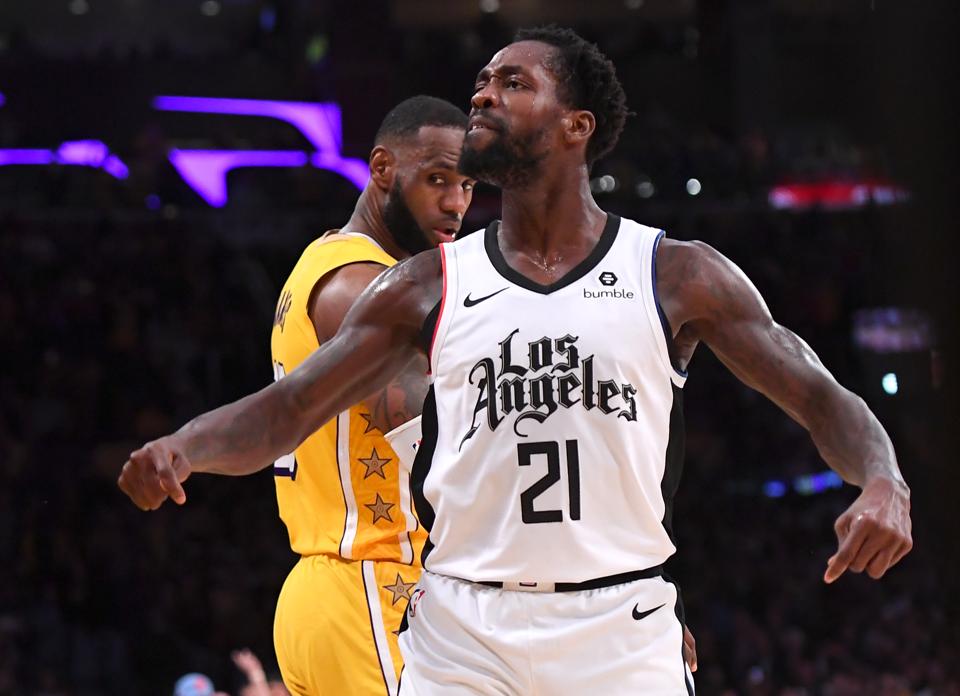 LOS ANGELES, CA – DECEMBER 25: Patrick Beverley #21 of the Los Angeles Clippers looks at the crowd … [+] after he blocked a shot by LeBron James #23 of the Los Angeles Lakers in the second half of the game at Staples Center on December 25, 2019 in Los Angeles, California. NOTE TO USER: User expressly acknowledges and agrees that, by downloading and/or using this Photograph, user is consenting to the terms and conditions of the Getty Images License Agreement. (Photo by Jayne Kamin-Oncea/Getty Images)

Just reading the sentence out loud seems unfathomable. How can someone stop an individual who is 8 inches taller, and weighs 75 pounds more than them? The answer to that question is Patrick Beverley. The type of hustle and tenacity required to take on a challenge like that is in Beverley’s DNA. Born in Chicago, he relishes any opportunity to prove the chip on his shoulder, to prove that he belongs in the NBA, and to prove that he’s best defender in the league. It’s a trait all of his teammates are fond of.

‘You saw immediately when he got that match up that he wanted it.’ – Paul George

The thing about Patrick Beverley, is that this isn’t a one time thing for him either. He’s routinely taken on the challenge of guarding the other team’s best player, in clutch moments, no matter what their size is. His success in doing so, has earned him the trust of his peers in these situations.

‘We’ve got all the confidence in the world in Pat to make that stop. He can guard anyone in this league.’ – Ivica Zubac

Patrick Beverley represents everything the Clippers want to be about. Last night, Beverley put up a stat line of: 8 points, 4 assists, 6 rebounds, 1 steal, 1 block, on 3/7 shooting. To the casual box score viewer, it doesn’t seem like anything spectacular; Beverley doesn’t extend into the double digits in any category. However, he was a game high +26 on the night, brought crucial offensive rebounds, and significant stops that helped win the game. ‘He just makes hustle plays,’ head coach Doc Rivers said. ‘You can’t coach that.’ Beverley is that rare instance of a player that brings an intangible quality to the game, the walking definition of an ‘un-statable’ player.

‘He’s one of those guys that won’t show up in the stat sheet, but if you watch the game, he shows up… He’s a winning player.’ – Paul George

Beverley’s style of play is contagious to his other teammates. It’s a quality that’s hard to put a price tag on. One that makes Lou Williams, a noted poor defender, make smart decisions in the passing lanes. He’s an energy guy that gets the crowd going, dives for every singe loose ball, and jumps for every single rebound.

Last night was a prime example of this – he finished the night with 9 rebounds. Those 9 rebounds were tied for the game high of any Laker player, including: Javale McGee, Anthony Davis, Dwight Howard, and LeBron James. The Lakers are noted as one of the biggest teams in the league, and yet somehow, a 6’1’’ guard matched every single one of them in rebounding. In a land of giants, it was the smallest person on the court that contained the biggest heart. That heart led Beverley into getting a crucial offensive rebound that helped secure the Clippers’ victory last night, a moment that Doc Rivers called the play of the game.

‘Pat keeps doing that every game. First game against the Lakers he got one at the free throw line after a miss.’ – Ivica Zubac

When the Clippers signed Patrick Beverley to a 3 year, $40 million deal, some people scoffed at the signing. I had maintained that his return to the Clippers was worth more than just money and stats – last night was an example why. Patrick Beverley is the gift that keeps on giving for the LA Clippers.