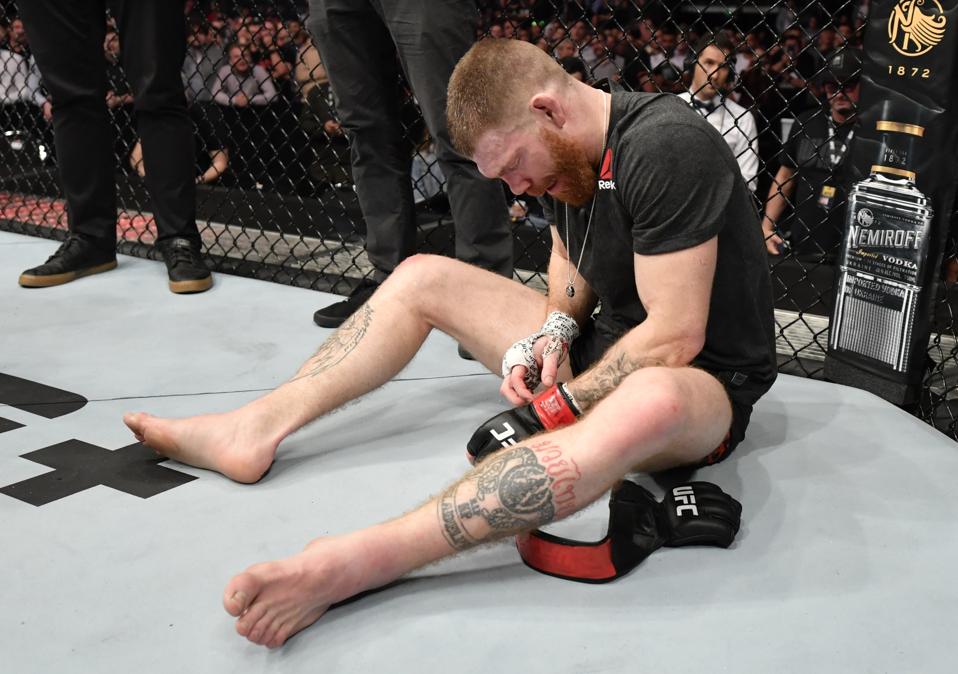 After a close split decision loss, but before making his way to the hospital, Paul Felder said his MMA career could have come to an end after his fight with Dan Hooker.

Felder, with his right eye badly swollen and appearing to show the remnants of every strike Hooker landed to his face, held back tears when he spoke to UFC commentator Dan Hardy following the main event of last night’s UFC Fight Night 168 event in Auckland, New Zealand.

“I knew it was close, I felt like I hurt him a lot in the fight but he got the takedowns, so he’s smart,” Felder said. “He busted me up pretty good, and that might be it for me.”

“Man, I got a 4-year-old at home that misses me every time I go away like this. I don’t know. But congratulations to Dan. I knew this is exactly what I was in for when I came here to New Zealand. I pissed this guy off, and when you piss off a talented guy like Dan, he’s gonna bring it to you.”

“Man, that was fun, brother. Five rounds going at it. I’m not sure (what’s next), you know. I’ll still go back, I’ll talk to my family, but it was an absolute honor to share the octagon for 25 minutes with this guy.”

Felder, who hails from Philadelphia, but trains out of Milwaukee, made the long flight to New Zealand for this event.

We have seen more than one fighter speak out of emotion following a hard-fought loss and that might have been the case for Felder, who would have probably landed a fight awaits a top-five ranked opponent in the loaded lightweight division with a win. But with a family that misses him and a gig as a UFC commentator, Felder could have been telling us the truth.

If Felder does walk away from MMA, he will go down in the books as one of the toughest fighters to ever compete in the lightweight division. Through 22 professional bouts, his only stoppage loss came via a doctor stoppage in 2016. His loss to Hooker ended a two-fight winning streak and a run of five victories at 155 pounds. His only setback in the past three years before his loss last night was a 2018 split decision defeat to Mike Perry in a short-notice welterweight scrap.

His bout against Hooker won “Fight of the Night,” which gave Felder his fifth UFC fight-night bonus award.

An NFL Source Provides The Inside Word On...

‘The Hunt’ Was The Unluckiest Movie In Years,...

Entrepreneurs And Small Businesses: How Your Recruiting Methods...

Tentative Agreement In Place Between MLB And Players...

How This Artist’s Designs Are Exactly What The...

What To Include In A Business Plan For...