Breaking
How, When And Where You Can See A...
New $2.2 Trillion Stimulus Bill Proposed—$1,200 Stimulus Checks,...
Why Do We Do What We Do? Manipulating...
California Brand Goes All-American As Amazon Bans Foreign...
The 3 Best Analytics Companies of 2020
Senator Cory Booker: Supporting Small, Minority-Owned Businesses Will...
Trump’s Taxes Are Finally Leaked—What’s Next?
Washington Heats Up Ahead Of First Presidential Debate:...
Systemic Racism Leads To Disparities In Nursing Home...
The New Regular: Prepare For Conflicts Of Customer...
Web VR.0 – Have VR Websites (Finally) Arrived?...
This Next Evolution Of E-Commerce Did $18 Billion...
This Next Evolution Of Ecommerce Did $18 Billion...
IRS Taxes Most Lawsuit Settlements And Exact Wording...
13 Questions To Answer Before You Die
Just Launched: Long-Term Stock Exchange For Companies Building...
Home Business Paul Pogba At Heart Of Manchester United Talk – Especially When Not Playing
Business 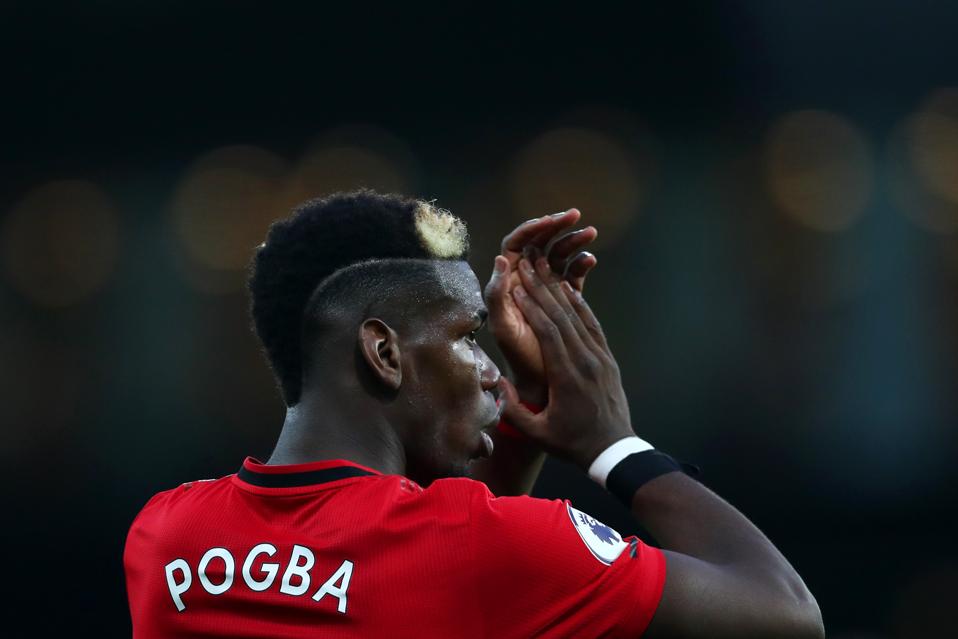 Paul Pogba of Manchester United applauds the fans after the Premier League match against Watford on … [+] December 22, 2019.

The French World Cup winner has been eased back into the Manchester United first team at the busiest time of the year in the English Premier League – the frenzy of football packed into the festive season.

But, after two stints from the bench following a four-month lay-off with an ankle injury, Pogba was missing for the short trip to Burnley. Despite – or maybe because of – his absence, the 26-year-old was at the heart of the post-match debate.

The Daily Mail’s Ian Herbert claimed: ‘Manchester United’s young players demonstrated a commitment to the cause tonight that Pogba so perpetually lacks.’

Cue heated Twitter debate about Pogba’s value and virtues or lack of them, depending upon which side of the debate you reside: Misunderstood midfield genius or showboating skiver?

United boss Ole Gunnar Solskjaer explained that Pogba had been left out of the squad for a rest after substitute appearances against Watford and Newcastle United in the punishing Christmas schedule. ‘Paul has played in two games now and he’s been out for a while, so we didn’t feel it was right for him to participate today.’

Given that he has been absent since September, rationing Pogba’s return would seem sensible. That Pogba didn’t even travel to Turf Moor was, however, remiss. On somebody’s part. Was the Frenchman told he wasn’t required or was it his choice not to travel?

That Pogba’s return to the team coincides with the arrival of the January transfer window immediately ramped up the talk of a move to Real Madrid. Of course it has to be Real, the only club in any shape or form likely to be able to afford Pogba. Whether Real need Pogba is another question.

Madrid manager Zinedine Zidane has long coveted Pogba and last summer was hot on the trail of his heir in the heart of the French midfield. As AS said: ‘Zidane has a real soft spot for the Manchester United man, who is exactly the kind of player he most appreciates: a box-to-box operator who brings physical presence and plenty of ability on the ball.’

But also according to AS, Real are not interested in splashing out the cash for Pogba and have instead told Zidane that the future lies with 21-year-old Uruguayan Federico Valverde. This, of course, may just be a part of the bargaining-via-media process so popular with Los Blancos, ramping up the youngster’s value while feigning indifference to United’s star.

Meanwhile United are said to be sniffing around Tottenham Hotspurs’ Christian Eriksen as a potential midfield playmaker. Although Eriksen is two years older than Pogba he would be a considerable bargain in comparison, with a value of around £25 million in this transfer window – given that he would be available on a free when his Spurs contract expires in the summer.

Pogba meanwhile cost United £90 million when he joined in 2016. He has since won a World Cup and would be expected to fetch an even bigger fee should he be sold this winter, despite a checkered spell in Manchester.

Pogba’s Manchester United journey is a tortured tale full of twists and turns. He controversially first joined the Red Devils as a 16-year-old, when United recruited him for the Academy from Le Havre. There were accusations of poaching but the two clubs eventually reached a secret agreement and face was saved. But three years later Pogba left for Juventus after limited first team opportunities at Old Trafford and having failed to agree a new contract. Four years later he returned – for that astronomical price tag. But he has not truly justified the £90m, especially during a tortured time serving under Jose Mourinho.

Now Solskjaer needs to decide whether he wants to count on Pogba or not? His squad is already looking a bit threadbare following the (not necessarily unwelcome) departures of Ander Herrera, Romelu Lukaku and Alexis Sanchez. But how much cash would United recoup with the sale of the few other eminently-disposable players such as Phil Jones or Marcos Rojo? Pogba could attract up to £140 million from Real. That would make for quite a war chest to address United’s many areas of need. Pogba ought to be the sort of player you could build a team around but has his chance to be that player at United gone?