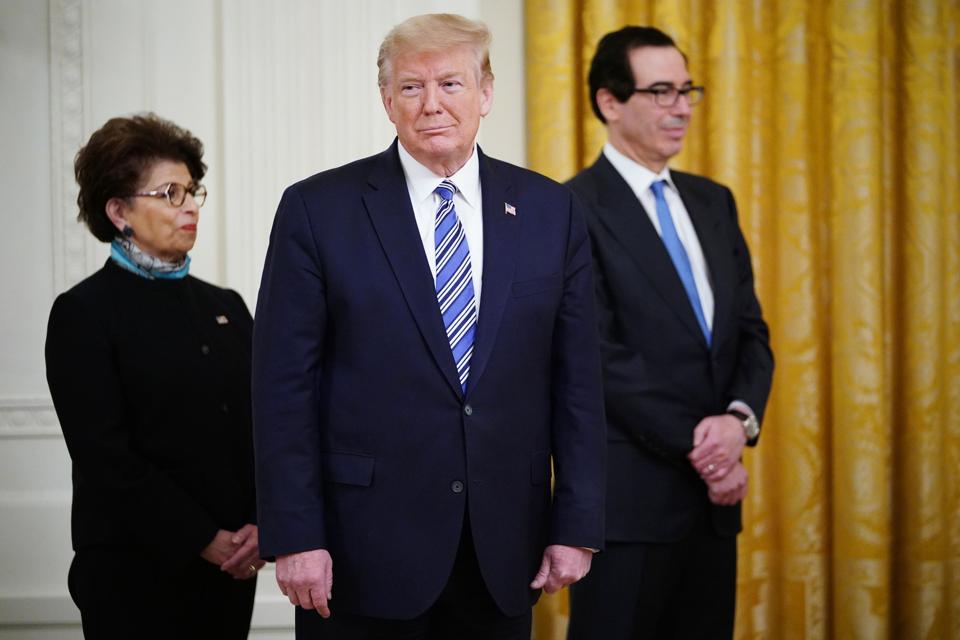 US President Donald Trump (C) is flanked by Small Business Administration Administrator Jovita … [+] Carranza (L) and Treasury Secretary Steven Mnuchin during a press briefing in the East Room of the White House in Washington, DC, on April 28, 2020. – US President Donald Trump held a press briefing about supporting small businesses during the coronavirus pandemic through the Paycheck Protection Program. (Photo by MANDEL NGAN / AFP) (Photo by MANDEL NGAN/AFP via Getty Images)

#TaxTwitter where tax professionals of various sorts kind of swap professional recipes and engage in remote group therapy practically turned into all Paycheck Protection all the time as CPAs and others who often are a business’s most trusted advisers threw themselves into helping their clients.

The banks were supposed to share a piece of their 5% fees with agents, but generally decided to keep it all for themselves, because they are, you know, banks.

Regardless there was a lot of concern about how hard forgiveness was going to be, so the passage of this act is a big relief. Here are the high points.

In the original CARES model borrowers had eight weeks to spend the money. That has been extended to twenty-four weeks. Since the loan was based on two and half months of the prior year payroll (That is a simplification), that creates significant breathing room.

Also to achieve full forgiveness a somewhat complicated head-count test had to be met by June 30. That has been extended to December 31, but more significant is relief in the event the borrower is unable to get people back. – How you gonna keep down on the burger grill after they got $600 per week unemployment?. The other possible source of relief is an inability to get back to the same level of business because of all that social distancing stuff. Here is the language on that.

“ (7) EXEMPTION BASED ON EMPLOYEE AVAILABILITY.—During the period beginning on February 15, 2020, and ending on December 31, 2020, the amount of loan forgiveness under this section shall be determined without regard to a proportional reduction in the number of full-time equivalent employees if an eligible recipient, in good faith—

“(i) an inability to rehire individuals who were employees of the eligible recipient on February 15, 2020; and

“(ii) an inability to hire similarly qualified employees for unfilled positions on or before December 31, 2020; or

“(B) is able to document an inability to return to the same level of business activity as such business was operating at before February 15, 2020, due to compliance with requirements established or guidance issued by the Secretary of Health and Human Services, the Director of the Centers for Disease Control and Prevention, or the Occupational Safety and Health Administration during the period beginning on March 1, 2020, and ending December 31, 2020, related to the maintenance of standards for sanitation, social distancing, or any other worker or customer safety requirement related to COVID–19.

Also the amount of the loan that must be used on payroll rather than other expenses has dropped to 60%.

Borrowers can still elect to have the eight week period apply. I am not certain why they would want to. It probably has to do with how PPP interacts with other relief.

Borrowers under PPP who received forgiveness had been excluded from a provision of the CARES Act that allowed deferral of the payment of payroll taxes. Generally speaking I don’t think you are doing people a favor by letting them delay payment of payroll taxes. Regardless of my thought, that exclusion of PPP forgiven borrowers from the deferral benefit has been repealed.

In the event all is not forgiven, the minimum maturity of the payback will now be five years.

Under the CARES Act, any payment was deferred six months. That has been changed to the time that the forgiveness amount is remitted to the lender. For borrowers who don’t ask for forgiveness the deferral period is ten months.

The celebration on #TaxTwitter has already commenced as you can see below: