Breaking
Think Small: Timely Picks To Capture The Reawakening...
Patient Gets Covid-19 Swab Lodged In Her Lung...
Nine Signs You’re Not Being Effective During Your...
Chromebooks Can Now Run Windows 10 – Find...
Will Biden’s Tax/Benefit Plans Help/Hurt You And The...
This Fashion Brand Turned A Stripe Into A...
Shots In The Dark: Why Access To A...
What Building Wealth Really Takes In Business
Building A Circular Economy In New York City...
How To Cast Your Vote Against Election Scams
New Science On Stress: Feeling Your Feelings Works...
Why Now Is The Right Time To Acquire...
7 Obstacles That Prevent People From Starting Businesses...
Booking Holdings Falls; Likely To Remain A Risky...
Apple iPhone Crushes Samsung Galaxy In Important New...
Shape And Hold: How A British Entrepreneur Took...
Home Business Payton Vs. Jordan? ‘The Last Dance’ Ignored The 1996 Finals’ Key Player
Business

Guard Nate McMillan of the Seattle SuperSonics moves the ball during a game against the Chicago … [+] Bulls at the Key Arena in Seattle. (Jonathan Daniel/Allsport)

At the tail end of the eighth episode of, “The Last Dance,” ESPN’s documentary about Michael Jordan, you will see some entertaining back-and-forth between Jordan, now 57 years old, and former Sonics point guard Gary Payton. The two were the best players on their respective teams in the 1996 NBA Finals, a meeting between the record-setting 72-win Bulls and the 64-win Sonics, both the top teams in their conferences.

You will hear Payton, the Defensive Player of the Year—an extremely rare distinction for a backcourt player—saying that Sonics coach George Karl did not want him guarding Jordan during the series because he needed Payton’s offense more.

And you will hear Jordan laugh as he holds a tablet, watching the screen and listening to Payton’s description of the hitting and the banging before finally saying: “The Glove. I had no problem with The Glove.”

What you will not hear in that banter is the name that mattered most in that series: Nate McMillan. It was supposed to be McMillan, not Payton, who guarded Jordan in the 1996 Finals. That is not to say the entire outcome of those Finals would have been different—the Bulls were a juggernaut. But McMillan, arguably, was the biggest factor in the way the series unfolded. He simply was not mentioned.

At that point in his career, Jordan was less a high-flyer and more an elbow post-up guy. He was not playing on the perimeter much. The Sonics needed a bulky, smart guard to handle Jordan, and McMillan was their best bet.

“We had a bad break,” Pistons coach Dwane Casey, then an assistant with the Sonics, told me, “because the guy who probably would have done the best job on him individually was Nate McMillan, who was a very good defender and big enough to handle Jordan in the post. Nate was about 6-6, he was strong and could match Michael in a lot of ways. But Nate was not healthy, he had a bad back problem at that time—he had nerve problems—and though he was out there trying to play, he was not 100 percent.”

McMillan was 31 at the time and was suffering. He played only 55 games that season and would play only 55 more games over the next two years before retiring at age 33. He had damage in his sciatic nerve, which sent a wincing pain through his hamstrings if he moved the wrong way. He’d been battling his health all season and by the time June arrived, he was unable to jump or even touch his toes.

McMillan played only 6 minutes of Game 1 but sat out Games 2 and 3 altogether. He did play 35 combined minutes in Games 4 and 5, the two Sonics wins, the pain dulled by a cortisone shot.

He could only manage 10 minutes in Game 6, though, and the Sonics fell. McMillan was too injured to guard Jordan, even when he was playing. “It was tough,” Casey said, “because you can’t tell a guy, ‘Hey, go guard Michael Jordan,’ if he is not healthy.” 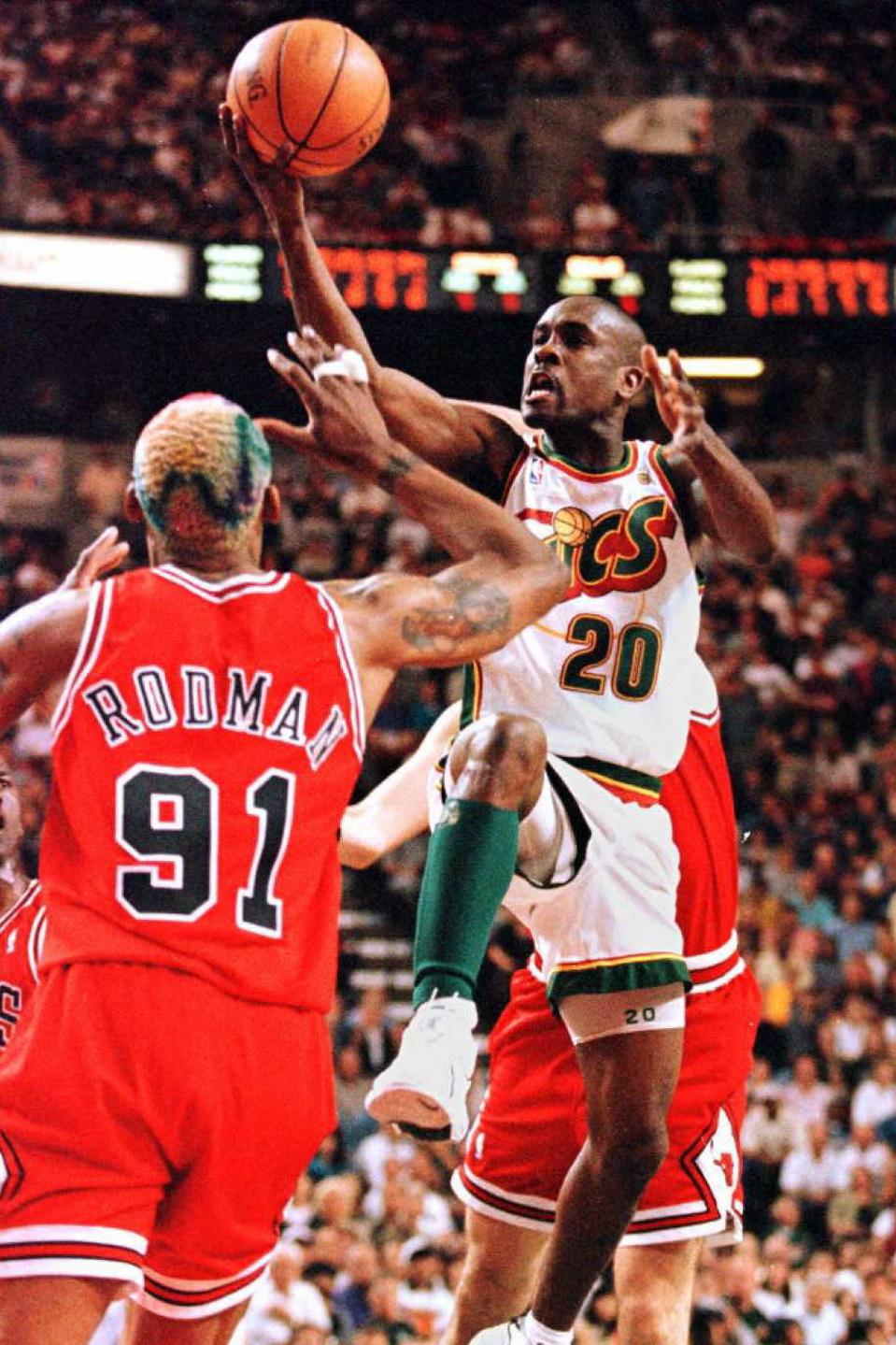 Gary Payton (R) of the Seattle SuperSonics drives the lane as Dennis Rodman of the Chicago Bulls … [+] guards 14 June during first half of game five in the NBA Finals at Key Arena in Seattle. (Brian BARH/AFP via Getty Images)

When McMillan was on the floor, he gave Payton a big offensive boost because he handled point-guard duties and allowed Payton to play off the ball, where he was more comfortable. In the first three games of the Finals, Payton scored 45 total points on 40.4% shooting. With McMillan at least trying to play in the last three games, Payton scored 63 points on 48.8% shooting.

After Game 4, when Payton had a breakout with 21 points, he was asked what had changed for him. “Nate,” he said. “Nate McMillan.”

Years later, McMillan told Percy Allen of the Seattle Times that if it were not for the back injury, the Sonics could have won the series. When Casey rattled off the options they tried on Jordan with McMillan injured—Detlef Schrempf, David Wingate, Hersey Hawkins—it is easy to see how much he was missed in the matchup.

“If I were healthy, we could have won,” McMillan told Allen. “I don’’t say that because I think I was a superstar player, but more because of the way we were playing. But then somebody else will say, well, Michael would have just raised his level of play, which is possible. It’s something that we’ll never know.”

That is how Casey remembered the series, too. He said things might have been different if the Sonics had another shot at it, but then, maybe in the end, Jordan would have found a way to carry the Bulls no matter what Karl or Payton or McMillan did.

“It really makes you realize just how great Jordan was, how great he was as a player, how difficult it was to stop him,” Casey said. “You know, as coaches, you are up all night trying to put together different game plans and you think you have everything covered. But then he goes out and does what he wants anyway, scores the ball, gets his teammates involved. And you have to think, there goes the game plan.”

If he had been healthy, McMillan would have been a more significant part of the game plan. For a younger generation of NBA fans, that Sonics bunch now may go down as the group that made Jordan cackle in laughter as Payton prattled. They were better than that but, because of the omission of the McMillan injury, viewers of “The Last Dance” will never know it.

How Will Coronavirus Impact Credit Scores And Small Business Lending Once The PPP Program Ends?