A cold winter day over the holiday break is the perfect time to visit a museum or theater. It’s fun, you’re supporting the arts, and — according to one new study —  it may even lead to a longer life.

This was the conclusion from an article published in the Christmas issue of the British Medical Journal this week. Daisy Fancourt and Andrew Steptoe from University College London compared the health and lifestyle habits of thousands of people over the age of fifty over the course of several years, and noticed that the group of people who engaged with the arts were on average living longer than those that didn’t take part in any cultural activities. 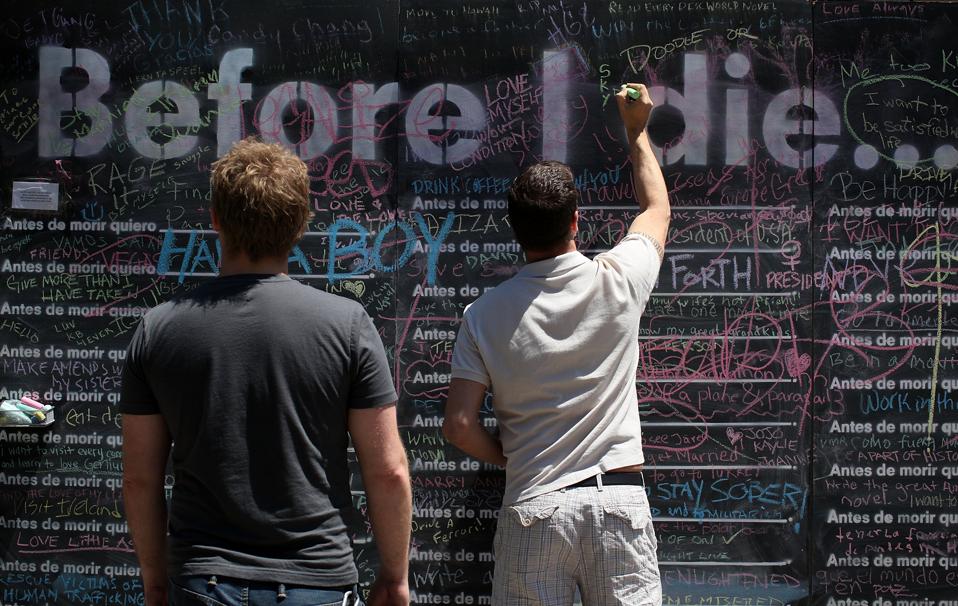 Washington DC residents write on a “Before I Die” public art display that invites people to share … [+] what is the most important thing they want to do before dying. May 11, 2012. (Photo by Alex Wong/Getty Images)

Art can make you live longer? That sounds like something straight out of Oscar Wilde’s The Picture of Dorian Gray. But the link between art and longevity is not that simple. This was not a study that sent one group of people to cultural events and kept a control group at home. Rather, the researchers analysed data from a very large study that tracked lots of different types of information on thousands of people. Whether they engaged with the arts was just one question on a very large survey they all took.

The participants of this study, the English Longitudinal Study of Ageing (ELSA), were selected from an even larger study, the Health Survey for England (HSE). This survey collects a wide variety of behavioral and social data from thousands of people that represent the population of England. The ELSA study included HSE participants who were over the age of 50 and filled in the required study questionnaire every few years. The survey asked questions about their home life, work life, hobbies, habits, diet, social life and a whole slew of other topics. Combined with health data collected during nurse visits, these surveys have since allowed researchers to find correlations between certain behaviors and people’s health. This is one of these studies.

In 2004, 6710 participants were included in the ELSA study. Their questionnaires, which they filled in every two years were compared with their health data for a period of fourteen years. In that time, 2001 of them died. Of course, the people who died were mostly those that were older on average, or had an illness that made them less likely to survive the study period. But there were other factors as well. Of the people who were physically inactive, a larger proportion died in this period than of those who regularly exercised. Men were more likely to die than women. Smokers more than non-smokers.

But a similar trend was found when the researchers compared people who attended cultural events, with people who didn’t take part in these activities. The art lovers were less likely to have died in that fourteen year period, compared to the others.

Of course, there could be a number of obvious reasons for that correlation. Perhaps older people are less able to leave the house than those closer to fifty, or people who tend to go to arts events are generally wealthier. And indeed, the researchers were able to find several of these factors. Besides age and wealth, other factors linked to arts engagement were things such as overall engagement with social causes, whether someone was lonely or not, and whether they had any disabilities. But even when all the available factors were taken into account, people who took part in cultural activities were still less likely to die within a certain time than their peers.

In their article in the British Medical Journal, Fancourt and Steptoe admit that it’s possible that there are still other unidentified factors that weren’t measured in the study that could explain this difference, but they say these “would need to have a considerable effect to account for the associations found”.

A simpler explanation is that people who regularly take part in cultural events really do have an increased chance of living to a certain age compared to people who want nothing to do with the arts. And this is not the first study to find such a correlation. Researchers who studied populations in Sweden had previously come to a similar conclusion.

Even one or two cultural activities per year reduced the risk of dying among the ELSA study participants by 14%, and attending such events more often reduced it by as much as 31%.

So if you have a few days off this week, visit a museum, take in a play, or go to a concert. And who knows, it could just make you live a bit longer.

Why These Thirtysomethings Are The New Wine Wise

Bank Of America Shows Us That Nobility And...