Breaking
Meet Onesimus, The Enslaved Man Who Saved Boston...
How to Build a Sales Forecast Model
The Unexpected Ways COVID-19 Has Forever Changed What...
Google Posts: Conversion Factor — Not Ranking Factor
How To Bring Your Branding To Life
Coinbase Cofounders And Investors Poised To Rake In...
How To Stay Top-of-Mind For Your Audience With...
Employers: Eight Red Flags You May Not Notice...
The benefits of videoing in the automotive industry
Ted Lasso, Other Apple TV+ Shows Arriving Soon...
How To Incorporate Click And Collect Into Your...
What Are Working Capital Loans and When Should...
The 10 Biggest Trends in Entrepreneurship to Look...
Clubhouse Has Grown 10X In Two Months. Here’s...
Here’s Why Tyson Foods Stock Looks Undervalued At...
How To Maintain Client Relationships During Long Projects
Home Technology Perseid Meteor Shower 2020: Everything You Need To Know To See ‘Fireballs’ In August
Technology 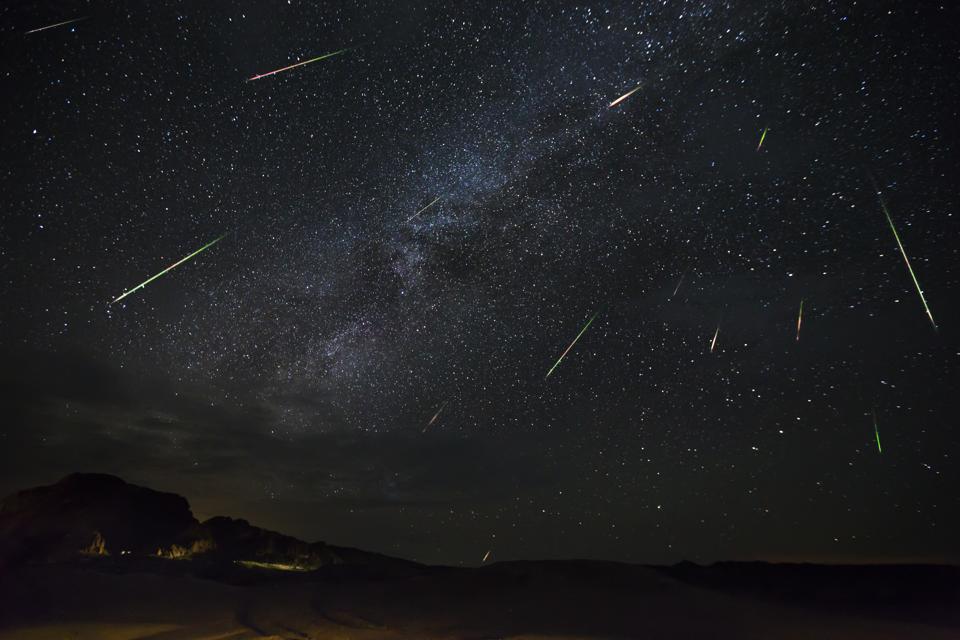 The beauty of the Perseid meteor shower in all its glory from Texas Bend in Big Bend National Park, … [+] Texas.

Are you ready for the year’s most popular meteor shower?

Earth is about to bust into some dust.

Active from around July 17 through August 24 each year, the Perseid meteor shower builds up to a peak of around 100 “shooting stars” per hour during the peak night, with the active the Delta Aquariids meteor shower also rumbling in the background.

However, observing conditions and positions, and what’s going on with the Moon, tend to make the reality somewhat different.

Here’s everything you need to know about getting the most from the Perseid meteor shower in 2020.

What is the Perseid meteor shower?

It’s an annual meteor shower that’s easily the most popular, though not quite the most prolific. It’s popular largely because it’s easily visible to the entire northern hemisphere in August, the most peak month for camping trips. It’s a chance to see as many as 100—but more likely about 50—“shooting stars” in the night sky around midnight.

When is the Perseid meteor shower in 2020?

It’s after midnight, and actually about 1 a.m. that your location will be firmly on the night side of Earth—and so will typically experience more meteors— but that’s not critically important. Clear skies are just as necessary.

Stay up late enough and you’ll also see a very bright planet Venus appear in the northeast a few hours before sunrise.

What causes the Perseid meteor shower?

Like most meteor showers, the Perseids are caused by comets. The dust and debris they shed as they pass through the inner Solar System and, crucially, across Earth’s orbital path around the Sun, and called meteoroids. The comet in question for the Perseids is Comet 109P/Swift-Tuttle, which last entered the Solar System in 1992 and is due back in July 2126, then in 2261. 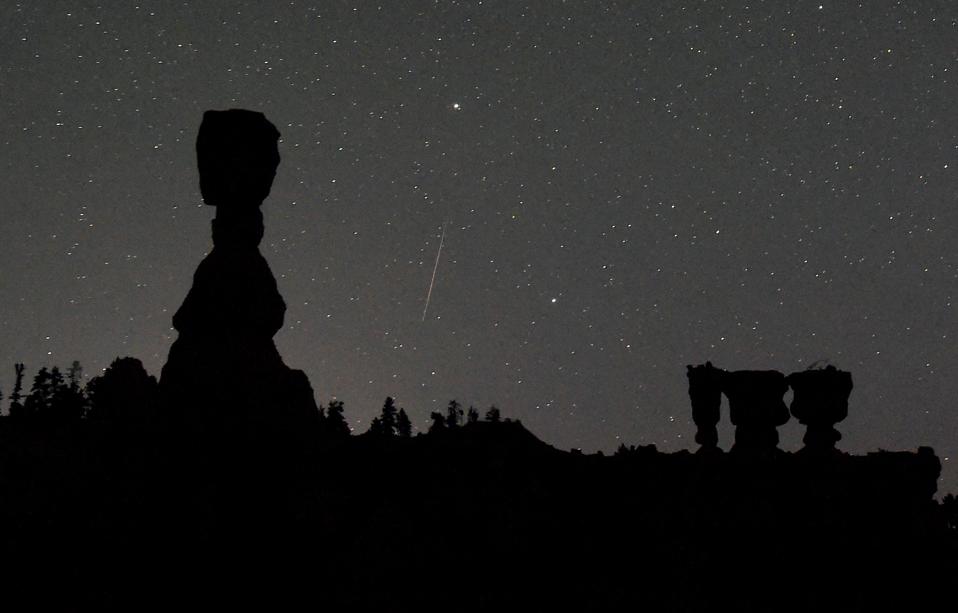 A Perseid meteor streaks across the sky between the hoodoos named Thor’s Hammer (L) and the Three … [+] Sisters (R) in Bryce Canyon National Park, Utah. (Photo by Ethan Miller/Getty Images)

Discovered in 1862, Swift-Tuttle is the largest Solar System object to repeatedly pass close to Earth, aside from the Moon. Its nucleus is 16 miles/26 kilometers in diameter, which is much bigger than the dinosaur-killing asteroid that struck Earth 66 million years ago. However, astronomers know that it’s not going to hit us in the next couple of thousand years.

What’s the outlook for the Perseid meteor shower in 2020?

Not perfect, but good enough to get outside and look up. Although you’ll hear tales from years gone from people who claim to have seen 100s of glowing “shooting stars” streaming across the night sky, it really does depend on many things:

Here are some tips gleaned from years of stargazing and meteor shower-watching:

If you don’t see any shooting stars and you start getting irritated, you’re doing it wrong. Seeing shooting stars demands intense patience and an almost obsessive and dream-like state. You will see them if you lose yourself in the experience. 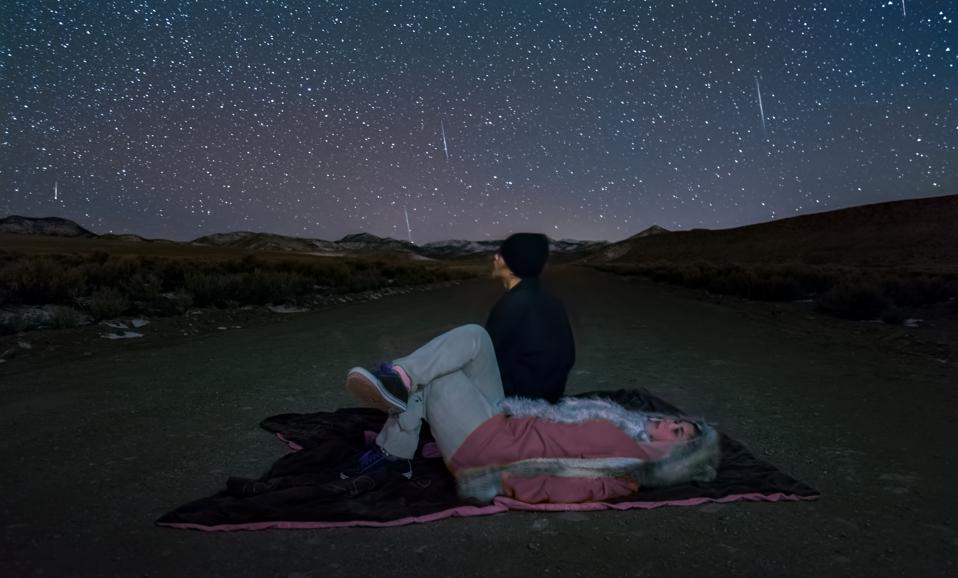 There will be a bright 47% illuminated Last Quarter Moon rising after midnight right when the peak of the Perseids is predicted. That’s a shame, but don’t panic. The peak is a brief period of heightened meteor activity, but it’s not the whole ball-game. There will be plenty of meteors before that time.

So although its probably not worth staying up all night to see meteors, you should definitely begin about 90 minutes after sunset—by which time it will be really dark—and continue through until the Moon rises and noticeably bleaches the night sky. Even then, you’ll still likely see “shooting stars.”

What is a ‘shooting star?’

Also known as “falling stars,” these fast-moving “stars” that light-up brightly and then quickly dim are caused by particles, dust and small rocks—mostly no bigger than a smaller than a grain of sand—striking the Earth’s atmosphere about 60 miles/100 kilometers up. They light-up as they discharge the energy gained from striking the atmosphere. What you’re seeing are meteoroids entering Earth’s atmosphere at high speeds—the Perseids travel as quick as 37 miles/60 kilometres per seconds—on parallel trajectories.

Why are they called the Perseids?

However, you don’t need to look in the direction of Perseus to see shooting stars. In fact, it’s better that you look straight above your head, though do expect the comet trails to originate from the position of Perseus in the night sky. Astronomers call Perseus the radiant.

Although the presence of a bright Moon on the peak night will lead many to overlook this year’s Perseids meteor shower there will, in practice, be plenty of opportunities to see “shooting stars” for those with patience who do their research.