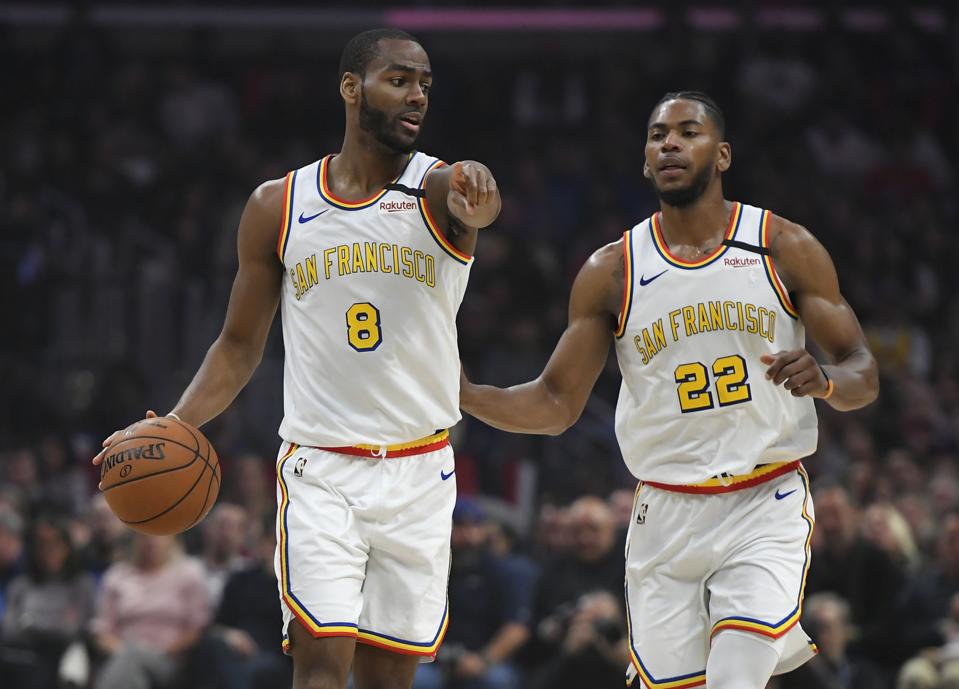 LOS ANGELES, CA – JANUARY 10: Alec Burks #8 and Glenn Robinson III #22 of the Golden State Warriors … [+] seen playing the LA Clippers at Staples Center on January 10, 2020 in Los Angeles, California. NOTE TO USER: User expressly acknowledges and agrees that, by downloading and/or using this photograph, user is consenting to the terms and conditions of the Getty Images License Agreement. (Photo by John McCoy/Getty Images)

The Sixers had acquired an abundance of second-rounders over the past few years, and the picks they’re sending out—from Dallas in 2020, Denver in 2021 and Toronto in 2022—aren’t among their most valuable. They still have 2020 second-round picks from the Atlanta Hawks and New York Knicks, both of which project to be in the mid-to-high 30s, and the Knicks’ 2021 second-rounder as well.

That gives them the ammunition they might need to make additional moves between now and the 3 p.m. ET trade deadline.

The Sixers could waive two players to create the roster spots they need for Burks and Robinson and still remain $1.18 million below the luxury-tax threshold, per ESPN’s Bobby Marks, but they would likely prefer to shop around for other deals that could further help them improve.

Burks averaged a career-high 16.1 points, 4.7 rebounds and 3.1 assists in 29.0 minutes with the Warriors this season, and he shot 37.5 percent from three-point range on 4.7 attempts per game. Robinson started all 48 games for Golden State prior to Wednesday, averaging 12.9 points, 4.7 rebounds and 1.8 assists while drilling 40.0 percent of his 3.5 three-point attempts per game.

Both players may wind up being nothing but rentals, as the Sixers won’t have Bird or Early Bird rights for either one. They could re-sign them via the non-Bird exception, which allows them to offer 120 percent of the league’s minimum salary, but they’ll otherwise have only the taxpayer mid-level exception at their disposal.

Burks is hoping to land a deal “somewhere in the $8-10 million range” this summer, according to Anthony Slater of The Athletic, which would be out of the Sixers’ price range. Based on the new $115 million salary-cap projection for the 2020-21 season, the taxpayer MLE will be $6.025 million, and the Sixers may prefer to split that up on multiple rotation players rather than spending it all on one reserve.

Retaining Burks and/or Robinson is a problem for a later day, though. For now, the Sixers can only hope they add some much-needed scoring punch to their oft-anemic offense.

Heading into Thursday, the Sixers have the NBA’s 20th-ranked offense, and their bench is averaging the third-fewest points leaguewide. Matisse Thybulle and Furkan Korkmaz have been their only two semi-reliable reserves, while Mike Scott, James Ennis III and Raul Neto have vacillated between helpful rotation pieces and actively harmful abominations on a night-to-night basis.

Burks and Robinson give the Sixers two more bench options to throw out on nights where Scott, Ennis, Neto or Korkmaz can’t buy a bucket. While Robinson is mostly a spot-up threat from deep—3.1 of his 3.5 three-point attempts per game are of the catch-and-shoot variety—Burks is a more versatile shooter. He’s drilling 37.5 percent of his 2.7 pull-up three-point attempts per game and 38.3 percent of his 2.0 spot-up attempts.

They’ll now be fed by Ben Simmons, whose passes have led to 11.7 three-point attempts per game this season. Simmons’ teammates are canning only 36.1 percent of those looks, so Burks and Robinson could help resuscitate the Sixers’ impotent offense by drilling a higher percentage of wide-open looks.

Perhaps more importantly, they could also allow head coach Brett Brown to cobble together a rotation that better maximizes the specific skill sets of Simmons and Joel Embiid.

Embiid voiced his concern about the Sixers’ offensive identity—or lack thereof—while speaking with reporters at practice Wednesday prior to the trade, per Kyle Neubeck of PhillyVoice.

“Spacing is an issue,” he said. “Sometimes we play fast, sometimes we play slow. But at the end of the day when you think about it, and as we are trying to get ready for the playoffs also, the game slows down and it becomes a halfcourt game. That’s where we struggle the most. Hopefully, we do a better job in the next three games before [the] All-Star [break].”

Pressingly, time is running out for Philly to figure out whether Embiid and Al Horford can co-exist. The Sixers average a ghastly 100.9 points per 100 possessions with the two bigs sharing the floor—nearly three points below the Warriors’ league-worst mark—while they average 108.4 per 100 with Embiid on and Horford off. Horford-Embiid lineups may prove useful in particular matchups, but Horford’s season-long cold slump from deep have largely made the two incompatible.

With Burks and Robinson in the fold, Brown may have more flexibility to make wholesale changes to his rotation.

Even if Horford and Embiid continue to start alongside one another, Horford can slide over to the 5 whenever Embiid rests. Simmons and Tobias Harris can split minutes at the 4 when Horford moves to center, while some combination of Burks, Robinson, Thybulle, Korkmaz and Josh Richardson can round out those lineups. The Sixers would have far more shooting on the floor at all times, which should help them avoid the lengthy scoring droughts that have plagued them throughout the season.

Burks and Robinson won’t single-handedly save the Sixers’ season, but they could make a similar impact as midseason additions Ersan Ilyasova and Marco Belinelli did two years ago.

The Sixers ultimately need to figure out their Horford conundrum to turn their disappointing season around. They’re staring down the possibility of starting the playoffs on the road, where they’re a horrendous 9-18, the worst mark of any Eastern Conference playoff team. Without fixing both of those issues, their championship aspirations could go up in smoke as early as the first round of the postseason.

But don’t underestimate the impact that Burks and Robinson can have, even in smaller roles than they had in Golden State. The Sixers were alarmingly short on players who can knock down open shots and occasionally create off the dribble, which they addressed with this trade.

No Customers, Closed Stores: Chinese Entrepreneurs Brace For The Worst Amid Coronavirus Outbreak

Automation And The Life Cycle Of A Job

How To Implement Progressive Web Applications And Disrupt...

Can The Green Deal Stop Europe From Becoming...

Cheap Oil Can’t Fill Planes And It Could...