The city of Philadelphia ordered all retail stores across the city to close immediately Sunday afternoon, as scenes of rampant looting circulated again—just hours after riots overtook Philadelphia and many other cities across the country as protests for the killing of George Floyd turned violent. 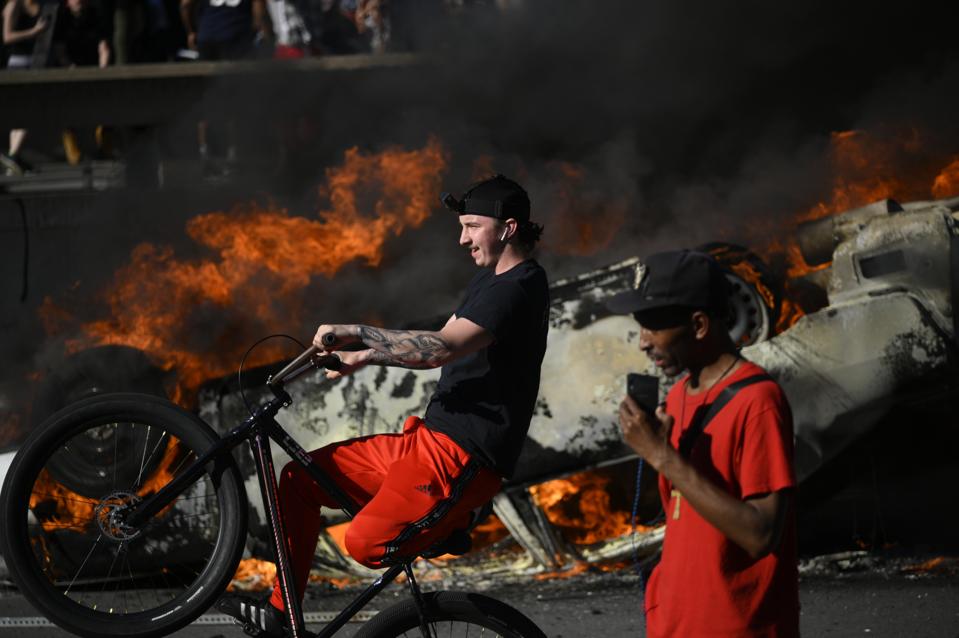 An overturned police cruiser burns as protestors clash with police near City Hall, in Philadelphia, … [+] PA on May 30, 2020. Cities around the nation see thousands take to the streets to protest police brutality after the murder of George Floyd. (Photo by Bastiaan Slabbers/NurPhoto via Getty Images)

Around 2:30 p.m., the city ordered the closure of all retail businesses—closing well ahead of an originally planned 8 p.m. curfew that officials announced Sunday afternoon would be moved up to 6 p.m.

The city’s police chief said Philadelphia has asked for support from the Pennsylvania National Guard in anticipation of more rioting Sunday.

Mayor Jim Kenney said on Sunday that much of Philadelphia’s Center City—including interstates—would be locked down with streets closed to vehicle traffic to prevent further damage from happening, after riots rocked the downtown area Saturday night, while the city’s Benjamin Franklin Bridge, which connects Philadelphia to Camden, New Jersey, has also been closed.

Philadelphia was the site of intense rioting Saturday night, after protests broke out in over 75 cities across the U.S. with several turning violent.

As of Sunday afternoon, Philadelphia police reported over 200 arrests had been made.

Saturday was the sixth and most intense night of protesting following the death of George Floyd, an unarmed black man that died after a white Minneapolis police officer held his knee to Floyd’s neck for eight minutes and 46 seconds. The officer that put his knee to Floyd has been arrested, but protesters have said they’ll continue to demonstrate until three other officers who were shown restraining Floyd are also charged. Organizers have decried the looting and rioting that’s come along with the protests, calling those engaging in violence “opportunistic.” The rioting around the country Sunday led to the deployment of the National Guard in Minnesota, Ohio, Georgia, Kentucky, Los Angeles, Washington, D.C. and Washington state.

“To hold up a Black Lives Matter sign and then use the destruction that they were committing in the name of Black Lives Matter is not only a slap in the face, but it’s completely a setback for everything that’s been accomplished by those who have been working to improve civil rights over the many a many a decades, and those who are working internally to do our parts to fix the issues within the criminal justice system,” said Philadelphia Police Commissioner Danielle Outlaw, who is a black woman.

Protesters in Philadelphia notably defaced the statue of former Philadelphia mayor and police commissioner Frank Rizzo, which was put up in 1999. Rizzo has a controversial reputation in Philadelphia, with many feeling he contributed to systemic racism in the city. Kenney said he hopes to have the city remove the statue in the next “month or so.”

Big Brands Vs. Startups: Here’s Why Authenticity Is...