Wheeler, who signed a 5-year, $118 million deal to come to Philadelphia, said the Phillies’ analytics team can “help me get to that next step.” That next step, Wheeler believes, is Gerrit Cole-level. Yes, that Gerrit Cole, arguably the best pitcher in the galaxy, who recently signed with the Yankees for $324 million.

Wheeler said he and Cole are “comparable stuff-wise” — uh, debatable — but he also conceded that Cole is an elite-level hurler while he is not… Or not yet elite. Wheeler said: “I read [Cole is] throwing more four-seam fastballs up in the zone. His slider spin got a little tighter. Stuff like that. That’s stuff I can do also. I just haven’t done it yet because it hasn’t been translated to me that way. So I think now we’re starting to figure that out and hopefully I can take that next step when I start working that into my mix.” 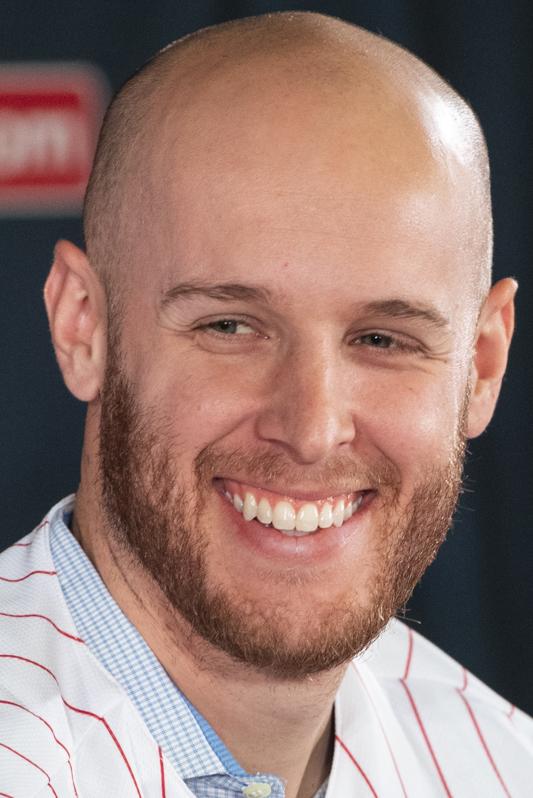 “I don’t think it’s a secret these days, so I can say it,” Wheeler said. “My two-seam gets hit a little bit more than my four-seam, so maybe it’s throwing more four-seams. It’s not a big speed difference, so it’s no secret, but maybe it’s throwing more four-seams. That’s one of the smaller things that you can do to get better without having to change too much and get in your own head.”

Wheeler, 29, will work with new Phillies pitching coach Bryan Price, who replaces Chris Young, who got fired after only one season with the team. Young relied massively on analytics; Price is expected to use analytics to augment his coaching style.

The rotation’s back end

The Phillies’ rotation will start off with Aaron Nola, Wheeler and Jake Arrieta. Its backend will be a battle between Zach Eflin, Nick Pivetta and Vincent Velasquez — a trio whose potential we’ve been hearing about since the Deadball Era. During Monday’s press conference, new Phillies manager Joe Girardi said: “And then you have Eflin, Velasquez, and Pivetta, three of our younger guys, to fill out the rotation.” Actually, Joe, they’re not that young. Eflin will turn 26, Pivetta 27 and Velasquez 28 at some point in 2020. Each bounced between the rotation and bullpen last season and combined for a 4.69 ERA. Eflin is the front-runner for a starting job. He allowed three runs or fewer in seven of his last eight starts after scrapping Chris Young’s analytics. Pivetta has the highest ceiling (and possibly the shakiest composure), while Velasquez’ high-riding 95-mph fastball may translate best to a late-inning bullpen weapon.

It would not be a shocker if the Phils made a late move for a veteran free-agent arm. Dallas Keuchel is a possibility. But any such move would drive team payroll past the luxury-tax threshold of $208 million, which would result in having to pay a penalty to exceed that amount.

And then there’s pitching prospect Spencer Howard, who won’t make the Opening Day roster, but many in the organization feel Howard will get a shot at rotation slot at some point during 2020.

Didi in the middle

Gregorius brings a much-needed left-handed bat to the team. Last season, Bryce Harper was often the only lefty hitter in the lineup. Look for Gregorius to bat in the middle of the lineup, just not directly before or behind Harper.

Gregorius, who slashed .238/.276/.441 last year, said he hurried back from Tommy John surgery, which impacted his offensive line. “Everybody was saying that I wasn’t ready or I wasn’t prepared to play when I came back,” he said. “But I still went out there and pushed. I wasn’t at my best, but I still pushed.” Gregorius said he expects a better season this year.

The back page of Tuesday’s New York Daily News summed up a nightmarish photo of Girardi, Gregorius and Wheeler — two former Yankees and a former Met — all at a Phillies’ press conference. The paper’s headline said: “Joe, Didi and Zack get together in picture from hell.” With a bigger headline that said: “THIS IS SO WRONG.” Phillies fans are like: Let’s take another photo when we sign Dellin Betances.

Apple Patent Reveals How Touch ID Returns To The iPhone

Can The Detroit Pistons’ Recent Surge Be Trusted?

How To Support The People Who Support Your...

Is This The Right Time For Arsenal To...