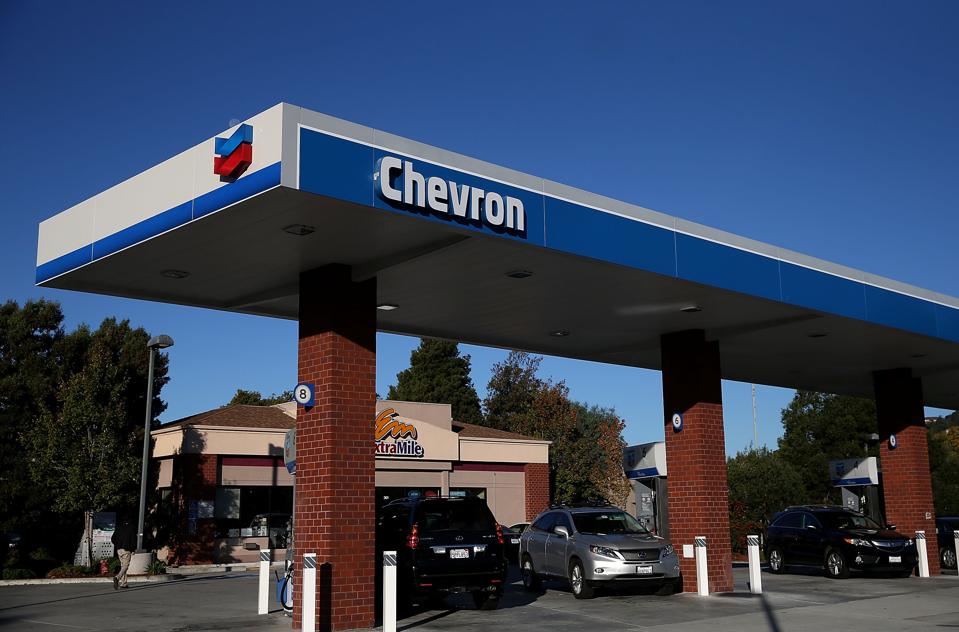 GREENBRAE, CA – OCTOBER 30: The Chevron logo is displayed at a Chevron station on October 30, 2015 … [+] in Greenbrae, California. Chevron announced plans to cut up to 7,000 jobs as oil prices continue to slump. Chevron’s third quarter revenue fell 37.2% to $34.3 billion compared to one year ago. (Photo by Justin Sullivan/Getty Images)

The stock price for Chevron (NYSE: CVX), the second-largest integrated oil and gas company in the U.S. is down by almost 20% since the beginning of 2018, driven by significant declines in crude oil prices. In comparison, oilfield services major Halliburton (NYSE: HAL) has seen its stock decline by 74% over the same period. This comes despite the fact that Halliburton’s revenue growth for the 2017-2019 period stood at about 9%, compared to just 3% for Chevron. Although Halliburton’s margins have been slightly lower compared to Chevron’s in recent years, partly due to impairment charges, the company’s valuation multiples are also significantly lower. Does that make sense? We don’t think it does and believe Halliburton is likely a good investment at the moment compared to Chevron, as oil prices continue to rebound. Our dashboard Does Halliburton’s Sharp Decline Versus Chevron Make Sense? has the underlying numbers.

How Do The Core Businesses For Chevron And Halliburton Compare?

Let’s look at the core business prospects of both companies a little more closely. Chevron is an integrated oil and gas company involved in exploring and developing oil & natural gas sources. It also refines and markets oil and natural gas products. Chevron’s revenues and profits are largely levered to hydrocarbon prices and this has resulted in its stock dropping by over 20% year-to-date.

Halliburton, on the other hand, provides a range of upstream services required by oil companies such as Chevron, helping to locate hydrocarbons, drill, and complete wells and manage production. While oil field services stocks have taken a bigger hit compared to the broader market, as oil and gas companies are expected to scale back on capital investments this year, Halliburton has fared still worse, partly due to its exposure to the North America market (53% of total revenue), which has higher production costs, which make oilfield activity less viable when prices are low.

However, oil prices have recovered sharply in recent weeks. WTI crude currently trades at levels of over $32 per barrel, marking an increase of over 150% since late April, driven by the gradual opening up of the U.S. economy and optimism that the pandemic can be controlled. Moreover, the Trump Administration has also shown signs that it was working to get OPEC+ to curtail production in order to protect U.S. producers. This is also boosting sentiment across the industry.

Sure, Chevron stands to benefit more quickly from a recovery in prices compared to Halliburton, which will only see the second-order effects of a rally, as companies rethink capital budgets. However, Halliburton could be a better play on the recovery given that its stock is down by over 50% year-to-date. Moreover, the company currently trades at about 0.4x trailing revenues, compared to 1.2x for Chevron and this should also provide reasonable comfort to investors.

Will the increased virtualization of business impact the oil prices in the long-run? View our analysis Oil Prices Don’t Like The New Work From Home

Attempts To Penalize Energy Companies Is Counterproductive To Post-Pandemic Recovery

Brazil’s ‘Nazi Scandal’ Week And Why It Doesn’t...

Five Things The Bureau Of Prisons Could Do...