Play Hawks And Doves Instead Of Orcs And Elves In Humblewood

Intelligent animals are an important part of our folklore. The Big Bad Wolf from Aesop’s Fables, the wisecracking trickery of Bugs Bunny or the strange mysticism of the rats from NIMH are all reflections of these legends. Anthropomorphic fantasy has been on the rise as of late with games such as the asymmetric Root, the worker placement of Everdell or the light yet dark exploration of Pugmire. Hit Point Press launched a Kickstarter earlier this year for their own campaign setting full of talking animals using the D&D Fifth Edition rules called Humblewood. I took a look inside an advance copy to crow about the setting. 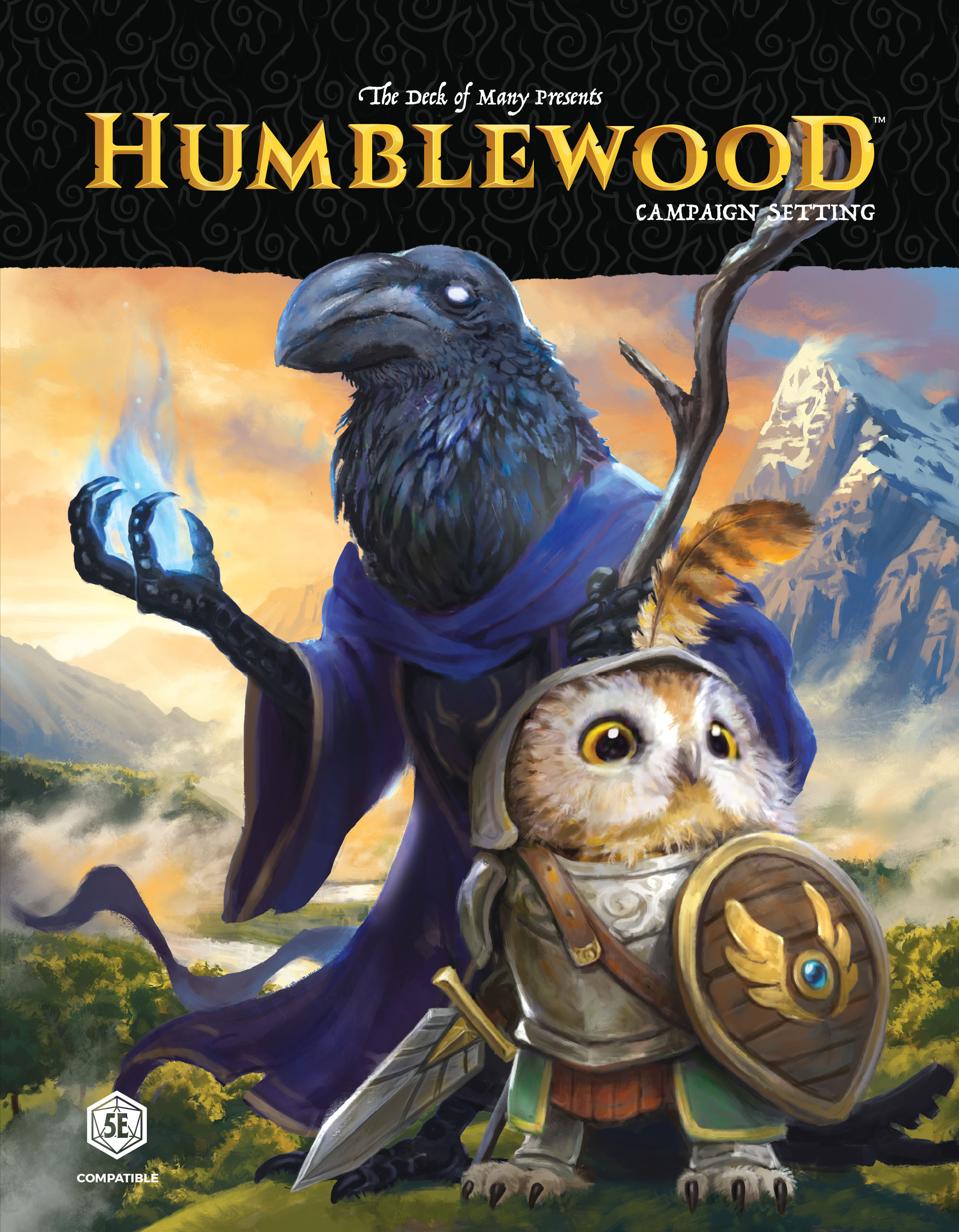 Cover of the Humblewood Campaign setting.

The setting of Humblewood connects to the fairy tale origins of Dungeons & Dragons. Characters are citizens of the titular wood, living in a handful of communities in this place where nature strives to maintain a balance. It’s a peaceful place where bandit strike are defended by villagers and a militia called the Perch Guard. The guard has helped birdfolks culture become the most dominant though they live mostly in harmony with the other creatures. A part of the forest burned by a great fire has remained a forbidding place that’s minded by a mystic organization called the Tenders. They’ve noticed a stirring of something dark within this Scorched Grove and soon heroes will need to rise up and protect the peaceful people of Humblewood from the once and future evil.

The book goes into more detail about the perils and lives of the people of Humblewood, but it summarizes the important points in a single page at the beginning of the book. The summary reads like the opening crawl of a Star Wars movie and it’s an excellent tool to help Dungeon Masters pitch this setting to potential players. The page could be copied and handed out to players at the beginning of the first session or it could be read and adapted as the opening to each game, slowly being transformed by the player’s action. Many first time settings flounder by hiding the neat stuff about their world for the Dungeon Master to uncover. I hope more 5e settings adopt this idea in the future. 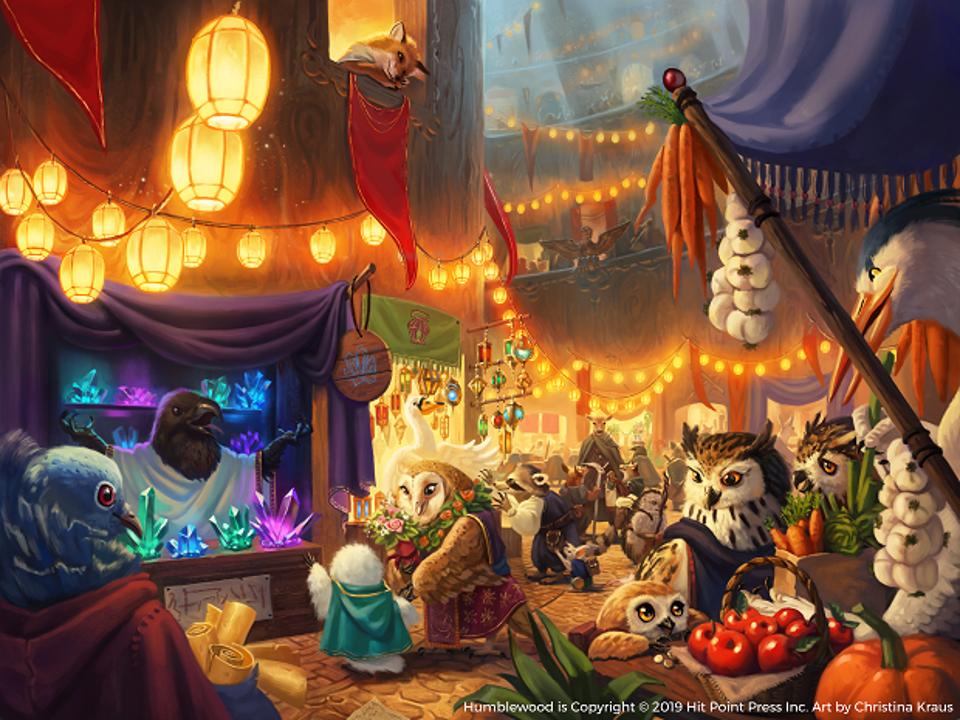 A market in Humblewood.

Another way to sell the game is by showing off the art. There are some gamers who claim to be happy if they could get a 10-point Word printout of a game if it kept the costs down, but great art can sell a game’s tone in a second. The gorgeous painted art in the Humblewood book establish that tone well; a little whimsical, a little dark and a lot fantastical. The art styles switch up nicely when needed. A chapter on the gods of the setting depict each in the style of illuminated manuscripts to add a dash of mystery and power to the pantheon called the Amaranthine. The encounters of the campaign also get gorgeous maps to help tables visualize these set piece encounters.

The book assumes tables that play the setting will still be using the original D&D Core Books for the most part as there are no new classes in the game. There are new class options, a handful of new spells and 10 playable races to choose from instead of the usual dawarves and elves. Half of the races are the Birdfolk, which include crows, chickens, doves, hawks, owls and Smallfolk like hedgehogs, mice, deer, raccoons are foxes. Any of these races could slot into a regular D&D world with relative ease given the utilitarian nature of the edition. In a great touch for tinkerers, the player’s chapter opens on a page for reskinning the playable races to different animals should a player really want to play a rabbit or a pangolin.

Including adventures in a setting book is a challenging decision. Adventures are good for helping to establish tone for a setting, but some readers find it to be dead space once the adventure is complete. “Adventure In The Wood” runs from first to fifth level and takes the characters from humble beginnings to confronting the evils of the Scorched Grove. The book’s presentation here structures the adventure for groups that use individual experience point totals and those who use milestone experience. Each part of the campaign feels like it’s written like a chapter in a book where the players level up at the end of the chapter.

The talking animals of Humblewood seem to make it ideal to use to introduce children to role-playing games. Kids not into playing elves or half-orcs might find birds or woodland creatures as a more accessible option. Like the best children’s entertainment, the setting is written with an eye to the adults who will be leading any kids on the adventure. The Scorched Grove can be a terrifying place and it’s up to the Dungeon Master how they want to handle the darkness of the setting. Kids love spooky stuff more than parents like to admit, but the book aims for a solid middle ground that can be adjusted as needed.

Humblewood can be ordered directly from Hit Point Press or it can be ordered by your Friendly Local Gaming Store in regular or deluxe versions. The deluxe version includes pre-printed maps, a reference deck and character standees. If your table is looking for a change of pace or looking to bring some younger adventurers to the table, take them to Humblewood.

For The First Time Since 2009, The Oklahoma City Thunder Will Not Play On Christmas Day

Katherine Johnson Won The Space Race With The...