Breaking
Looking To Improve Efficiency In Your Business? Here’s...
AI and machine learning for business
How Social Media Changed the World
Shopify: The Pros and Cons
Should your business go green?
Expanding Your Business Into Spain: What You Need...
Essentials For Your Office Coming Out Of COVID-19
What Can Marketers Learn From Digital Cults?
Why NASA’s James Webb Space Telescope Will Never...
Increasing HR Effectivity and Efficiency through Software Solutions
The Difference Between Building A Startup In Bull...
Fluor Corp Ranked Among Today’s Top Shorts
Common Pitfalls to Look Out for When Buying...
Will the Olympics go ahead this year?
Pack Up the Big Top: Insights from MozCon...
Best WordPress Themes for Blogs
Home Finance Plummeting Machete: Down 53%, Avoid Wayfair Stock
Finance 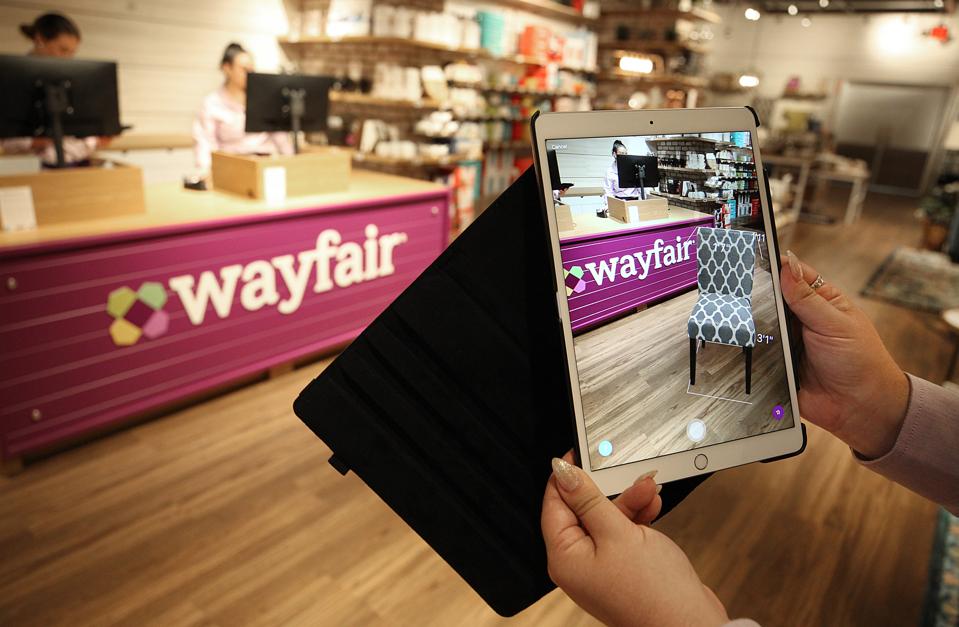 NATICK, MA – AUGUST 20: A virtual reality app is demonstrated at Wayfair’s first store in the Natick … [+] Mall in Natick, MA on Aug. 20, 2019. Shoppers can don virtual reality headsets to see how furniture would fit into a space, using Wayfairs Room Planner tool. They can virtually climb onto a dining room table to get a 360-degree view of a digitally rendered room, then swap out chairs, chandeliers, and art on the virtual walls. Thats just one example of how the Boston-based e-commerce giant has used its digital DNA to create its first brick-and-mortar store. It opens Wednesday in the Natick Mall. Product information, including prices and customer ratings, is displayed on screens that update in real time to reflect online price changes. Staffers carry iPads with an augmented reality tool that makes furniture appear in a 3-D setting, or they can snap a picture of an item in the store and find dozens like it online. (Photo by Suzanne Kreiter/The Boston Globe via Getty Images)

Hard goods retailer Wayfair has had an amazing journey from an online vendor of birdhouses and sundries to today. Sadly for investors, Wayfair stock peaked at about $174 in March 2019, and has since fallen 53% to roughly $82 as of February 14.

That downward trend was turbo-charged — sending its shares down $13.52 on February 13 — by Wayfair’s announcement of 500 layoffs. I see this bump in the road becoming a mogul.

(I have no financial interest in the securities mentioned in this post).

Signaling what I would guess will be a surprisingly unpleasant fourth quarter earnings report — expected February 28, Wayfair announced jobs cuts Thursday. Those cuts represented about 3% of its workforce — roughly 500 jobs (including 350 at its Boston headquarters), according to CNBC.

Wayfair — which employs over 17,000 people around the world and competes with Amazon, Crate & Barrell, and Ikea — remains optimistic about its future. A spokesperson told CNBC, “We continually evaluate the needs of the business and work to increase efficiencies while aligning our teams with the initiatives that drive the greatest impact for our customers. We remain as confident as ever in Wayfair’s future.”

Wayfair was cofounded by CEO Niraj Shah who took his time finding the right entrepreneurial opportunity. As he told me in a 2012 interview, Shah graduated from Cornell in 1995 and moved to Boston. He co-founded an Internet consulting business with a classmate, Steve Conine, that they sold in 1998. Next he worked as an Entrepreneur In Residence at Greylock Ventures and started and sold a software company.

Shah started CSN Stores — which ultimately became Wayfair — in 2002 by assembling a network of small e-commerce ventures. CSN began as a website that sold bird houses built in the founder’s garage and later extended to online furniture stores. They rebranded as Wayfair in 2011. Wayfair said it was beating the competition on three benefits that its customers valued: big selection, competitive prices and consistently great service.

Some observers believed that its profitless growth was a good short-term strategy. In a May 2017 interview, Clark University Visiting Assistant Professor, Thomas Murphy, told me, “Wayfair has gone after the online furniture and home goods business segment with a minimal inventory approach. They focus on drop shipping where the original producer ships to the customer and Wayfair reduces the need to hold too much inventory. This business model makes sense short term to capture market share; however, competitors such as IKEA make it difficult to maintain a long term profitable position.”

Murphy was right to warn about Wayfair’s long-term challenges. As I wrote in September 2019, one analyst then thought that Wayfair’s prospects were so bleak that he initiated coverage with a sell and set a $100 price target — $20 below its then roughly $120 a share.

According to TheStreet.com, Berenberg analyst Graham Renwick held a bleak outlook due to competition eroding Wayfair’s first mover advantages. Renwick argued that Wayfair had fallen behind its rivals on customer purchase criteria such as price, selection and convenience where it previously had prevailed.

Renwick argued that Wayfair’s best products (out of 14 million items) were frequently available on Amazon at lower prices. He forecast bigger losses for Wayfair as cheaper prices eroded its brand loyalty while it made “big capital outlays for fulfillment and to acquire customers,” according to TheStreet.com.

Wayfair’s biggest disappointment for investors was its guidance. That’s because the midpoint of its fourth quarter revenue forecast — in the range of $2.48 billion to $2.53 billion — was about 7% less than the Wall Street consensus estimate of $2.67 billion.

Wayfair has yet to demonstrate that it can remedy its competitive disadvantages. As CNBC noted, Wayfair’s quarterly losses have continued to climb and until recently it has been hiring rapidly despite the mounting losses. What’s more, Wayfair has taken heat for its high shipping costs for sofas and coffee tables — which include paying for customer to ship back returns, according to CNBC. Critics have also noted that Wayfair spends too much on marketing and advertising and needs to improve its customer service.

Investors Demand A Path to Profitability

Last fall investors imposed a new requirement on fast-growing money-losing companies — defining a path to profitability. Piper Jaffray analyst Peter Keith, who had an Overweight rating on its shares, “noted that the market is increasingly punishing unprofitable companies, such as Wayfair, that haven’t spelled out when they will start to make money,” according to Barron’s.

In October Wayfair was optimistic. “We could not be more confident in the future growth of the business. Our business continues to benefit from meaningful long term investments that directly and dramatically impact the customer experience further propelled by a massive structural shift in shopping behavior from offline to online,“ he told investors.

Now Wayfair is more guarded. The Boston Globe reported that Shah wrote an email admitting that Wayfair had overextended itself as it quickly entered new sales categories and launched outside of the U.S.. “This last period of investment went on too long. Through two years of aggressive expansion, we have no doubt built some excess, inefficiency, and even waste at times, in almost every area,” he wrote.

A 3% headcount cut is not going to fix what ails Wayfair. Do not grab onto this plummeting machete.