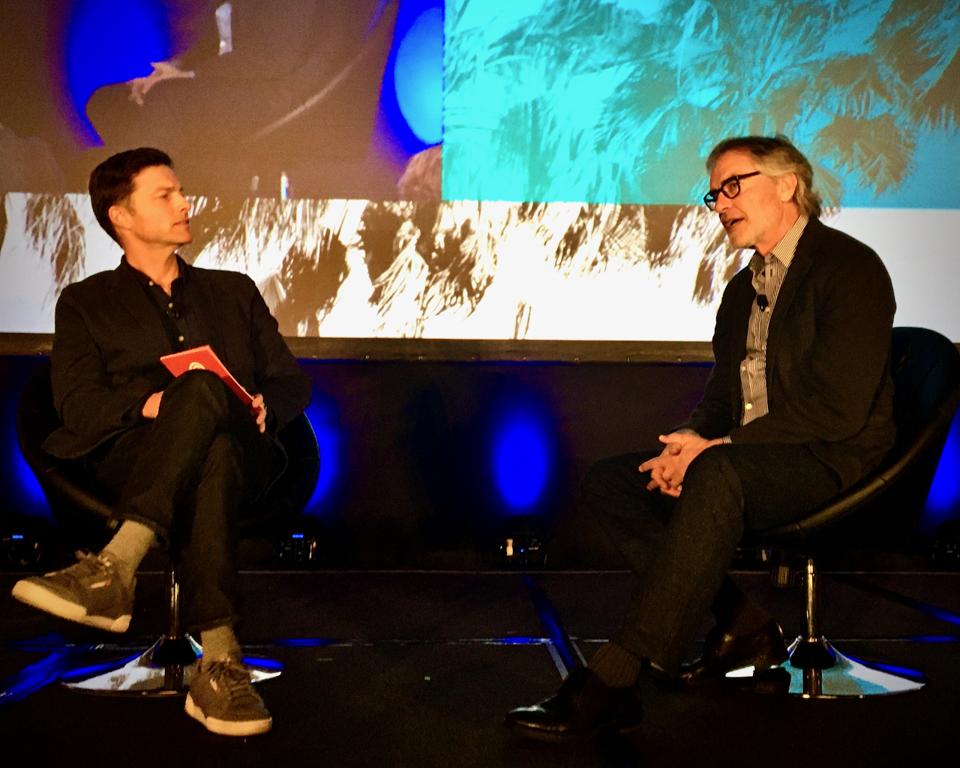 Bob Pittman made his name running cable pioneer MTV and then early digital powerhouse AOL. But he got his start in media at age 15, working on-air shifts at a small-town Mississippi radio station so he could pay for flying lessons.

Fast-forward 50 years, and Pittman is back in the business of audio, as CEO of iHeart Media, home to the nation’s biggest radio-station group. But he also presides over the nation’s biggest podcast network, and growth opportunities there have him particularly bullish, so much so that he even hosts his own podcast, Math & Magic: Stories from the Frontiers of Marketing.

“I think the sky’s the limit for podcasting,” Pittman said Thursday evening at the Podcast Movement Evolutions conference in Los Angeles. “As an industry, we need to keep investing in it so it can reach its full potential.”

Despite his own bullish take on podcasting, Pittman acknowledged that, “It’s hard to tell what’s going to be big. My job as CEO is to figure out where we’re going to make our big bets. Our strategy is to be where our listeners are, with products and experiences that they’d expect from us.”

iHeart made its own bet on podcasting in late 2018, acquiring Stuff Media for a reported $55 million, and installed its CEO, Conal Byrne, as head of the rechristened iHeart Podcast Network.

Early in the week, Spotify bought Bill Simmons’ podcast-driven media company, The Ringer, for a price that CEO Daniel Ek said could reach $196 million, depending on earn-out provisions.

It was Spotify’s fourth podcast-related acquisition, totaling nearly $600 million, in about a year, as the streaming-music giant acquires control over more audio content for which it doesn’t have to pay publishers licensing fees.

“The trend that we’re investing in is that radio is moving online,” Ek said during Spotify’s earnings call this week, then referred to Simmons’ ESPN background: “What we really did with The Ringer, I think, is we bought the next ESPN.”

The day before the conference, iHeart announced it would it expand its Spanish-language podcast offerings, with a slate of new shows developed by Enrique Santos, chairman and chief creative officer of iHeartLatino, and with a new co-production and sales agreement with digital-content company reVOLVER.

Nielsen’s recent Streaming Wars report suggests that a significant opportunity exists for more audio, especially subscription audio. Already, nearly two thirds of those whom Nielsen surveyed have at least one streaming audio subscription (a number that’s even higher in younger demographics), and more than half said they pay for two audio subscriptions.

Those subscriptions are likely not just about music, given that all the big services have most of the same 60 million licensed tracks. Podcasts create the potential for unique and exclusive content outside of music’s limited licensing opportunities.

Streaming audio differs significantly from streaming video in one key way, Nielsen noted. More people expect it to be free, thanks to a century of listening to ad-supported free radio broadcasts.

Pittman said 92 percent of Americans listen to broadcast radio at least once a week. Add in the streaming music services, audiobook services and podcasts, nearly everybody is listening to audio in one form or another.

The market for podcasts is “anyone with ears,” Pittman said. “The consumer has really run out of time with their eyes. Audio is the beneficiary of all this.”

Podcasts also can benefit even established stars in other media, Pittman said. He pointed to comedian Will Farrell and NBCUniversal’s low-budget horror auteur Jason Blum, who are using podcasts to work through stories and concepts with audiences before venturing into more expensive and time-consuming development cycles.

“I think it’s a great place to test out ideas, and get them out there,” Pittman said. “I know this: whatever we think sitting here today that podcasts will be, it will be well beyond that. The human mind has a hard time conceiving things that are different.”

In the meantime, Pittman and Byrne were hardly the only entrepreneurs and content creators looking for “something different” at the conference.

Event sponsors included Supercast, spawned out of Tiny Capital – a portfolio of startups headquartered in Victoria, British Columbia, and Tiny’s MetaLab product-design unit – to help podcasters generate more revenue by creating a premium subscription tier of offerings for their superfans.

“Typically, 2 to 8 percent of listeners can be converted to subscription,” Supercast CEO Jason Sew Hoy said. “Partly, it depends on how you promote it.”

It also depends on having some substantial scale, certainly thousands, if not tens of thousands of downloads per month. And some genres or areas of focus – like health or investing – may attract particularly ardent followers willing to pay for more content.

Higher-intensity approaches include offering “ask me anything” sessions, carefully annotated show notes with links and other background material, newsletters, search-enhancing transcripts, and even community features such as discussion forums for members. Depending on how much a podcast might offer in these premium features, a subscription might run from $5 to $15 a month, Sew Hoy said.

Among others sitting in on Pittman’s talk was Bill Curtis, for 35 years publisher of the Robb Report and other upscale, highly targeted magazines. After selling his print holdings to Jay Penske, whose Penske Media Group includes Variety and Rolling Stone, Curtis’s CurtCo Media turned to podcasting, establishing a studio in Malibu.

Curtis and General Manager Stuart Halperin (a long-time friend formerly with Clickstar, MovieTickets.com and other Los Angeles-area tech-entertainment ventures over the past three decades) were scouting the conference for talent, they said.

So too was Emi Norris, managing director, US for Paris-based Paradiso. The former Refinery29 and Bertelsmann executive was talking to creators at the conference about producing potential joint projects. Paradiso was launched last fall by executives with long history in European film and TV.

There were plenty of podcasters walking the halls, too. Debra Chen, a long-time corporate consultant on capital markets this week launched her own podcast, The Great Fail. Chen said the podcast will focus on the stories behind infamous business failures, such as the recent WeWork IPO collapse, with a sensibility and story-telling approach borrowed from narrative-minded true-crime podcasts.

After speaking about the project last fall at another conference, Chen said she was courted by two big media companies to join their podcasting networks. The process held up her launch by months, before she finally decided to launch without being part of either.

5 Clever Side Hustle Ideas For Entrepreneurs To...

Arturo Vidal Gives Barcelona Something To Think About...