Breaking
Expanding Your Business Into Spain: What You Need...
Essentials For Your Office Coming Out Of COVID-19
What Can Marketers Learn From Digital Cults?
Why NASA’s James Webb Space Telescope Will Never...
Increasing HR Effectivity and Efficiency through Software Solutions
The Difference Between Building A Startup In Bull...
Fluor Corp Ranked Among Today’s Top Shorts
Common Pitfalls to Look Out for When Buying...
Will the Olympics go ahead this year?
Pack Up the Big Top: Insights from MozCon...
Best WordPress Themes for Blogs
Get Ready To Rip And Tear, As The...
As Economy Recovers, Loan Approval Rates Increase For...
Lessons Learned—Avoiding The Fundraising Errors That Can Sink...
Top Tips to Help You Effectively Manage Your...
Malaysia’s Carsome, Tycoon Patrick Grove’s Catcha Group To...
Home Finance Policy Factors Will Drive The Market In 2020
Finance 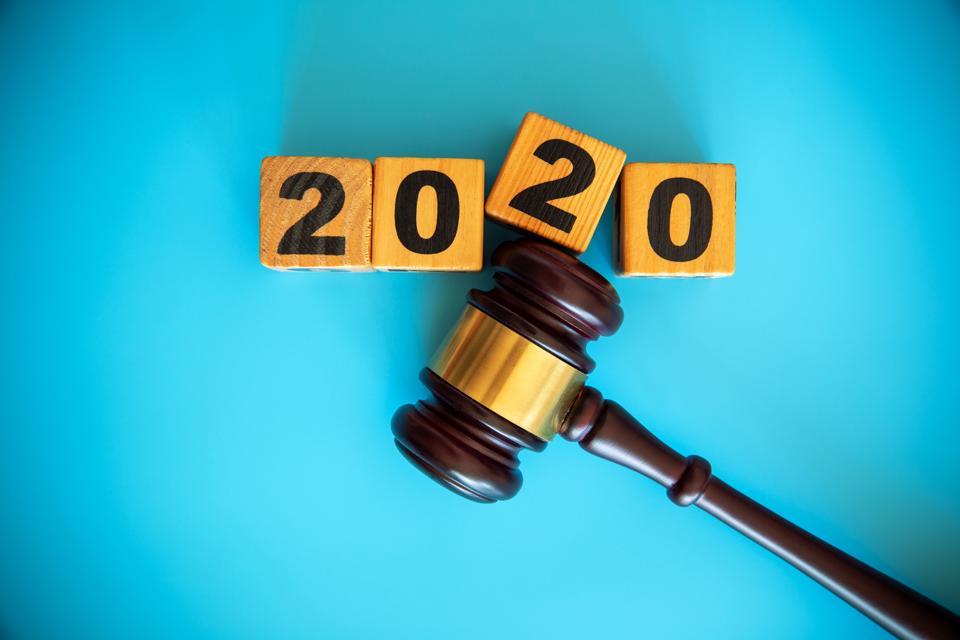 If you got dizzy reading too many 2020 investment outlooks, and are still unsure how to position your portfolio this year, focus on fiscal and monetary policy. These are the most important market catalysts you can bank on, for now at least.

“I love riding a horse that’s running,” David Tepper told CNBC. Mr. Tepper reportedly became convinced in December that the market would go higher as the Federal Reserve pumped more money into the system and as U.S.-China trade tensions eased.

Stan Druckenmiller, another legend, echoed Mr. Tepper. “I revealed a very bullish posture intermediate term since October when [Fed Chairman Jerome] Powell guaranteed he would not rescind the insurance cuts,” he told CNBC.

“In addition, Trump’s election prospects have increased with two trade agreements and big win in Iran which the Democrats have responded poorly to,” he added. “So I am still ‘riding the horse’ and bullish immediate term.”

Ray Dalio departed from the horse analogy, replacing it with a simple rhyme. He said investors shouldn’t be on the sidelines in the 2020 market, because “cash is trash.”

The collective net worth of these three gentlemen? About $35.4 billion, per the latest Forbes 400 rankings.

Tepper, Druckenmiller and Dalio know how to analyze charts and interpret valuations. They can see both are stretched. Yet they are where they are, because they understand how to properly compartmentalize such insights.

Sure, technicals and valuations matter. But the main story in their mind right now is the policy setup. Using that lens, here’s what you need to know to stay on the right side of the market.

The Federal Reserve’s pivot from hawkish to dovish was a major reason why stocks rallied in 2019. The Fed cut rates three times, which eased financial conditions and helped spur a powerful rally. The clip below shows how Chairman Powell’s pivot coincided with the market’s U-turn early in the year.

While the S&P 500 finished 2019 with a total return of 31.5%, the tenor of the tape in recent months has been particularly noteworthy. According to David Kostin of Goldman Sachs, the S&P 500 returned 11% over the past three months on realized volatility of 7% (annualized). The 1.7 return/volatility ratio ranks in the 99th percentile since 1950.

In other words, it’s been all upside and no downside.

This is true even with traditionally conservative stocks. The SPDR Utility Sector ETF (XLU) is the most overbought ever, with a current RSI reading near 87.

It’s hard to prove, but these performance anomalies are likely related to Fed policy. Specifically, the decision to expand the Fed’s balance sheet in September.

After short-term funding stress hit the repo market, the Fed began to supply additional repo funds and liquidity to banks. They’ve been expanding the balance sheet ever since, reminiscent of past Quantitative Easing (QE) campaigns. 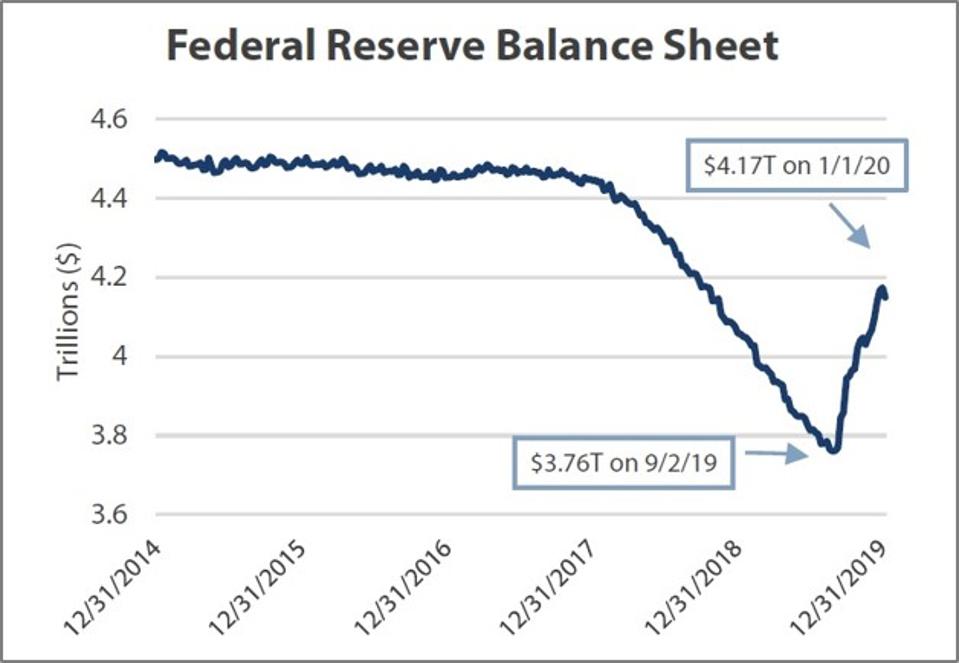 Many believe there’s a knock-on effect from QE, whereby extra liquidity the Fed creates finds its way into capital markets. This may explain the nearly vertical ascent in equities over recent months.

The monetary tailwind is global. For example, the ECB reignited its own QE program in September, while China has been cutting the reserve requirements for banks.

Monetary policy will likely stay easy throughout this year. Chairman Powell recently said, “I think we would need to see a really significant move up in inflation that’s persistent before we would even consider raising rates to address inflation concerns.”

Since the Tax Cuts and Jobs Act of 2017 took effect, the U.S. fiscal deficit has grown from $681 billion to over $1 trillion — the highest level since the financial crisis.

This cycle is different. Since 2017, revenue has grown 0.1% while spending grew 3.8%. Thus, the federal deficit is rising, which appears out-of-step since unemployment (blue line) is tracking near a 50-year low. 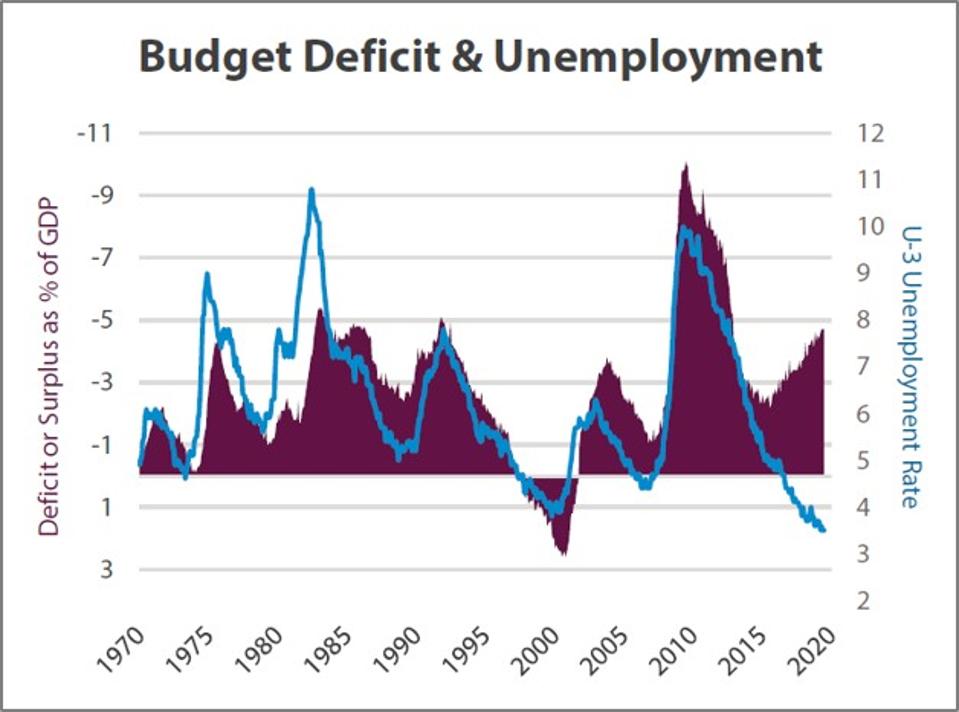 The U.S. economy has outperformed in recent years and interest rates remain near an all-time low. This provides ammo for European policymakers who argue the age of austerity should end.

In the U.S. and Europe, QE has effectively morphed into a direct financing of government deficits. And now that we’ve crossed that Rubicon, there’s probably no going back. Once politicians perceive a free pass to spend, they will spend.

With markets on a tear lately, it’s natural some investors have a fear of heights. Stories about asset bubbles are common. They’re interesting, but also a distraction.

Yes, valuations play a key role in a risk/return calculus. But valuation should never be mistaken as a timing device. Expensive assets can become much more expensive, and vice versa.