New polls show that most Americans have concerns about privacy and vote tampering with regards to mail-in voting, but still see it as a safer and preferable alternative to voting in person. 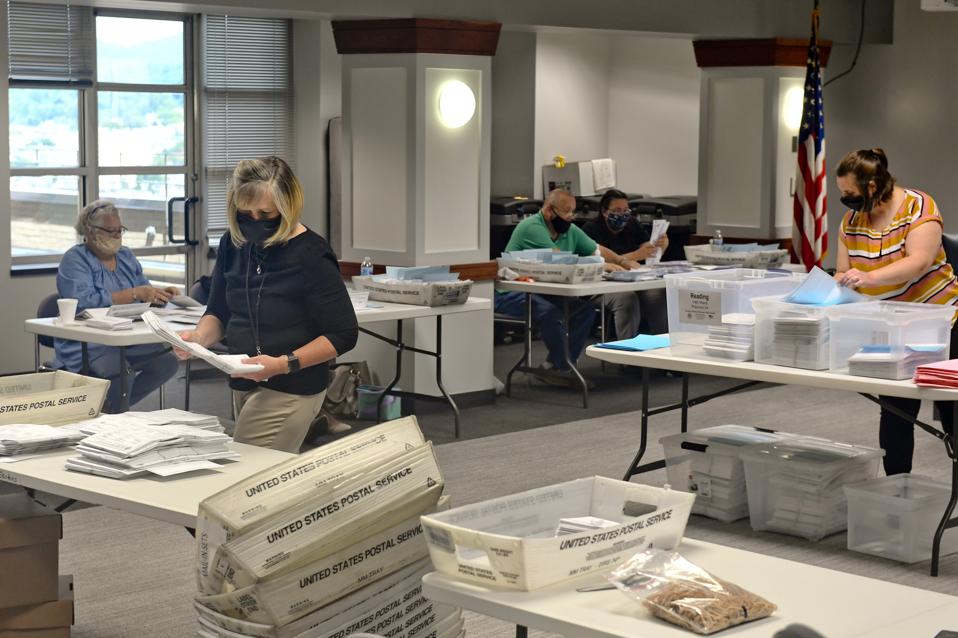 Reading, PA – June 3: On the 13ths floor of the Berks County Services Center in the Commissioners … [+] boardroom in Reading Wednesday afternoon June 3, 2020 where workers were opening and county the mail-in and absentee ballots from Tuesday’s election. Workers were wearing masks as a precaution against the spread of coronavirus. (Photo by Ben Hasty/MediaNews Group/Reading Eagle via Getty Images)

That echoes a Hill-Harris X poll of 946 registered voters released last week, which showed 68% of voters in support of voting exclusively by mail in November, up 1 point from April.

Both polls show significant partisan divides; 63% of Republicans in the Tuesday poll said they are more concerned about vote tampering than being exposed to coronavirus, compared to just 25% of Democrats who said the same.

In a poll from the New York Times and Siena College, 88% of former Vice President Joe Biden’s supporters in six battleground states said they support mail-in voting, while 72% of Trump’s supporters oppose it.

71. Safety concerns about voting in person are not unfounded. At least 71 people who went to the polls in the Wisconsin primary in April contracted coronavirus.

Despite Trump’s steadfast criticism of voting by mail, he and many members of his staff have themselves voted by mail. Trump, Vice President Mike Pence, Attorney General William Barr, Press Secretary Kayleigh McEnany, Trump campaign manager Brad Parscale and 11 other Trump family members, White House staffers and campaign advisors have all reportedly sent in mail-in and absentee ballots in recent years.

Numerous analyses of mail-in voting cast significant doubt on Trump’s claims of widespread fraud. A New York Times analysis debunked several assertions that Trump has made about the ease of tampering with mail-in ballots, such as that signatures can be easily forged, that ballots can be illegally printed and that people can steal and hijack ballots from mailboxes.

Voting by mail has been and will continue to be a critical feature of elections during the coronavirus pandemic. Mail-in voting has been expanded in 34 states, with California going as far as to send mail-in ballots to all voters, making it the 6th state to do so.

What Do Recent Surveys Tell Us About Small...