Breaking
How To Get Your Startup Business Off The...
How To Create A COVID Safe Construction Site
How to Make a Good First Impression at...
3 Marketing Mistakes Holding You Back From Hitting...
Is The Matter In Our Universe Fundamentally Stable...
Majority Support Covid-19 Price Controls Says New Brookings...
Reimagined Pan-Mass Challenge Approaches $41M 2020 Fundraising Goal
Is Bitcoin Poised To Bounce Back After Its...
These ‘Temporary’ COVID-19 Changes Will Become Permanent
How Will Our Mental Health Be Affected By...
Selling A Business During A Pandemic: When Talented...
Top 10 Digital Transformation Trends For 2021
Two Veteran Entrepreneurs Aspire To Clean Up America’s...
PPP Forgiveness Applications Are Opening Up. Should You...
Best Domain Registrar
Free Tech For Black Founders Initiative Saves Startup...
FinCEN Files Scandal Is Unlikely To Change Anti-Money...
GDP Vs. GNH: Rethinking What A Healthy Economy...
Global Consumer Sentiment Barely Inches Up As Coronavirus...
Home Business Portland Police Declare Unlawful Assembly For Fourth Time This Week As Tensions Reignite
Business

Tensions ratcheted up for a further night in Portland, with officers declaring an unlawful assembly in the Oregon city for a fourth time this week over concerns that a crowd outside the Police Bureau’s East Precinct were attempting to burn down the building late on Thursday. 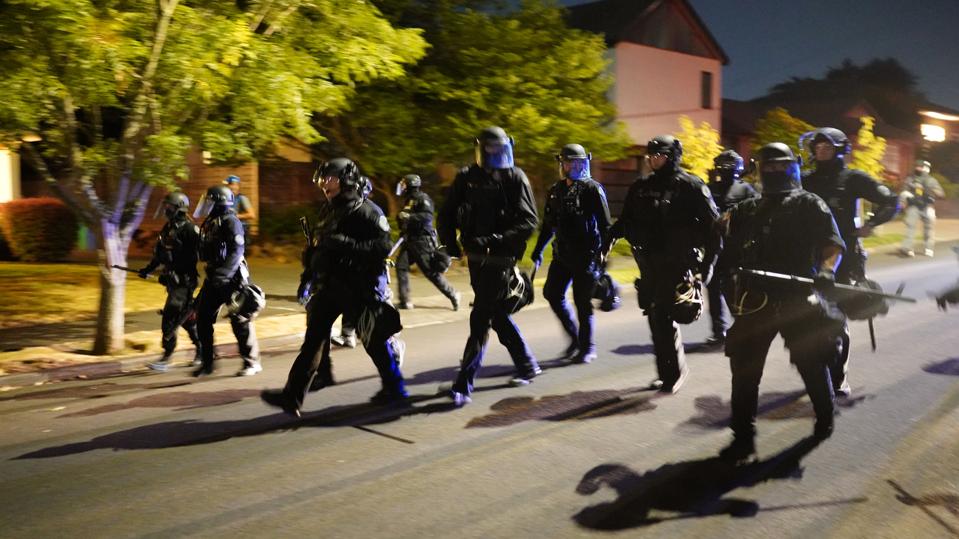 “We believe the intention of the crowd outside East Precinct is to vandalize or attempt to burn down the precinct,” Portland Police Department tweeted.

Officers added that anyone attempting to “break in to or burn East Precinct” faces arrest  and use of force.

The gathering was soon after declared an unlawful assembly, with crowds ordered to “disperse immediately”.

Local police later tweeted images of ties that they say were made by members of the group gathered outside the East Precinct and intended to “pop police vehicle tires…Several of the ties were thrown in the street and police vehicles ran them over, causing damage to tires,” police said.

Officers later closed a stretch of the city’s SE 106th Avenue, adding: “Any persons including members of the press who violate this order will be subject to arrest.”

Thursday night’s unrest follows a similar rally the night before, where a group broke windows, barricaded doors and attempted to start a fire while officers were inside, police said.

On Thursday, Portland Mayor Ted Wheeler held an online press conference, alongside the city’s Police Chief Chuck Lovell, addressing the unrest and urging people to stay away from the rally outside the precinct.

Wheeler said: “Don’t think for a moment that if you are participating in this activity, you are not being a prop for the reelection campaign of Donald Trump — because you absolutely are. If you don’t want to be part of that, then don’t show up.”

Hours before Thursday’s unrest, police shared a tweet from the Pacific Northwest Youth Liberation Front, who appeared to advertise the East Precinct rally. The group has since said it “hardly” organizes protests, but has said it boosts awareness of where they’re happening.

Police have insisted that rallies outside the East Precinct on Wednesday and Thursday were not related to Black Lives Matter protests, with incident commander Capt. Tony Passadore telling the Associated Press of Wednesday’s rally: “I don’t want people to get confused to think that this was something related to Black Lives Matter. I’ve been the incident commander for 24 nights of the 70-plus events, and I’ve seen amazing protesting going on in the city of Portland where people gather together.”

The East Precinct has this week become the latest flashpoint for some demonstrators, after some groups of demonstrators previously targeted other law enforcement buildings across the city, including the Portland Police Association and the Mark O. Hatfield federal courthouse. Sustained nightly protests in the city began following the death of George Floyd on May 25. However the arrival of federal agents into the city—ordered by Trump to protect the federal building and quell demonstrations—sparked unrest after agents were accused by local authorities of using excessive force, breaching a court order and taking demonstrators away in unmarked cars. A deal was struck last week between Oregon Gov. Kate Brown and the Trump administration, resulting in agents withdrawing from Portland from last Thursday to be replaced by local law enforcement. Peaceful protests ensued last weekend, but officers have since declared riots in parts of the city on separate nights, after images and video clips appear to show some groups trying to set fire to the East Precinct building and spray painting CCTV cameras.