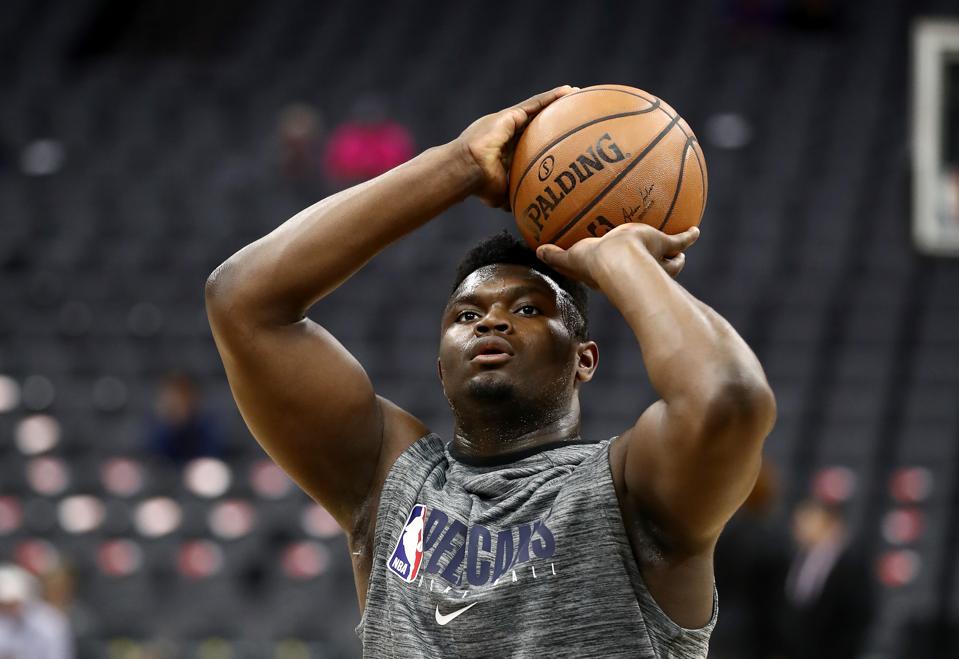 SACRAMENTO, CALIFORNIA – JANUARY 04: Injured Zion Williamson #1 of the New Orleans Pelicans works … [+] out before their game against the Sacramento Kings at Golden 1 Center on January 04, 2020 in Sacramento, California. NOTE TO USER: User expressly acknowledges and agrees that, by downloading and/or using this photograph, user is consenting to the terms and conditions of the Getty Images License Agreement. (Photo by Ezra Shaw/Getty Images)

The New Orleans Pelicans have recovered from a franchise-worst losing streak. The team still has a reasonable expectation of a playoff berth. The most recent road back-to-back in California showed the current squad won’t bow down to regular-season adversity. Now, reinforcements are due to arrive soon. Alvin Gentry relayed to the world that yes indeed, Zion Williamson has participated in his first full practice of the regular season.

Gentry also said it would be wrong to pick an exact time and date for Williamson’s debut. The team stated recently that Williamson is not quite ready and would make his regular-season debut after a few more full-run practices. Based on recent quotes, we can build a new timeline, one that puts Williamson on the court as soon as tonight (January 6 vs. Utah Jazz at home) and as late as January 18.

The New Orleans Pelicans are slowly reintroducing Williamson to the on-court team dynamic, word is getting out, and the building hype surrounding his debut is nothing new. The preparation for Williamson is quite different, however. Per Andrew Lopez, Williamson was going through biomechanic drills focusing on his walking and running. That is truly a patient build from the ground up. A later debut date would be right in line with the team’s approach so far.

Williamson has been seen doing warmup drills recently. Participating in full practices means Williamson has progressed beyond the basic full-court sprints, suicides, and change of direction cone drills. Then there are those intense shooting drills that inspire the clips being posted to Twiter and Instagram. Mentions of three-on-three and and fourt-court run games just build hope that Williamson will debut as soon as this week.

Zion said if were up to him, he “would have been out there two weeks ago.” Williamson could probably have played a few minutes starting with the first game of 2020. However, ‘In Aaron Nelson, We Trust’ is the motto in the rehab room. That could mean waiting a couple more weeks for Williamson.

Zion could probably play the next game if needed. That will not likely be the case. Gentry said Williamson would not play in the decade opening road trip against the Los Angeles Lakers (a close loss) and Sacramento Kings (a close win). The team wants to see a few more full-strength practices before unleashing Williamson on the rest of the league. As far as long term development, that is a fine stance.

Reading between the lines, it could mean that Williamson makes his debut at home next week against either the Utah Jazz or Chicago Bulls. The Pelicans were previously using language describing sections of months. Gentry is finally giving game-to-game updates on the expected debut. If Williamson was still a few weeks away, the team’s stated timeline would be a bit more vague, perhaps with the NBA All-Star Game as a reference point instead of the next few games on the schedule.

As for Williamson’s actual introduction, a home debut is preferable. To the victor go the spoils, and the New Orleans Pelicans won the NBA Draft Lottery. The New Orleans fanbase has suffered enough since Anthony Davis made his trade request. David Griffin and Gentry need a bit of goodwill and political capital. Williamson making a road debut would be akin to letting another team’s fanbase unwrap the New Orleans fans’ Christmas present.

The Pelicans can tease a soft open, just letting Williamson do a normal layup line warmup against the Utah Jazz. He could then feature against the Chicago Bulls on January 8. An early announcement from the team would help sell out a midweek home game. A home debut this week would also give Williamson enough time to recuperate in time to play road games against either the New York Knicks or Boston Celtics. However, Williamson will not play in back to back sets this year, per the team. At least one of those iconic franchises will have to wait another season to see Williamson.

The Pelicans could push back Williamson’s debut until January 16. Utah again visits New Orleans, and by that time Zion should be completely clear to play. This season stopped being about making the playoffs the moment Williamson needed surgery. Now there is no reason to rush him back. The road games are followed by travel days, not full-contact practices. The hype, and angst, waiting another couple of weeks for Williamson could be in the cards.

Williamson should get plenty of work after the NBA All-Star break. He has missed enough of the season that he should avoid the proverbial ‘rookie wall’ that pops up during a season. The Pelicans have only four back-to-back sitauations after the game against Boston. If healthy, Williamson should play. Just seeing him in true game shape would help the team evaluate the roster.

The easier schedule could help the team pile up wins and good vibes with the fans that paid for a competitive team. Williamson might even dunk his way into All-Rookie Team honors, should the New Orleans Pelicans earn a playoff spot. Either way, it seems that Zion Williamson’s debut will be the unofficial start of Mardi Gras this year.

30 Under 30: How Cameo Makes Tens Of Millions From Selfie Videos And D-List Celebrities

Inside The NASA Spacecraft That Will Take The...

The 3 Solar Eclipses You Absolutely Must See...