Breaking
Growing Your Retirement Money Using 401(k) Dollar-Cost Averaging
Wellness Exec Abby Miller Levy Partners With Venture...
Microsoft Teams Issues Strike To Zoom With Tidal...
What’s Coming For The S&P 500 In October
4 Ways You Can Showcase Empathy With Your...
A $22,000 Microsoft Surface Will Soon Be For...
Zooming In – Should SMEs Invest In The...
iOS 14: The Surprising Security Risk Of Sharing...
How A Break From Lord Sugar Changed The...
Sunday’s Google Doodle Is Actually About Google
Office Of The Comptroller Of The Currency Chief...
Source Code For Multiple Windows Operating Systems Publicly...
Why Forgettable Pfizer Really Is A Great Value...
Hot For The Holidays? Amazon Home Drone, Kid...
Best Small Business Loans
The FAAMG Stocks Drive The Markets
Home Technology Preserve Innovation And Empathy As You Automate
Technology 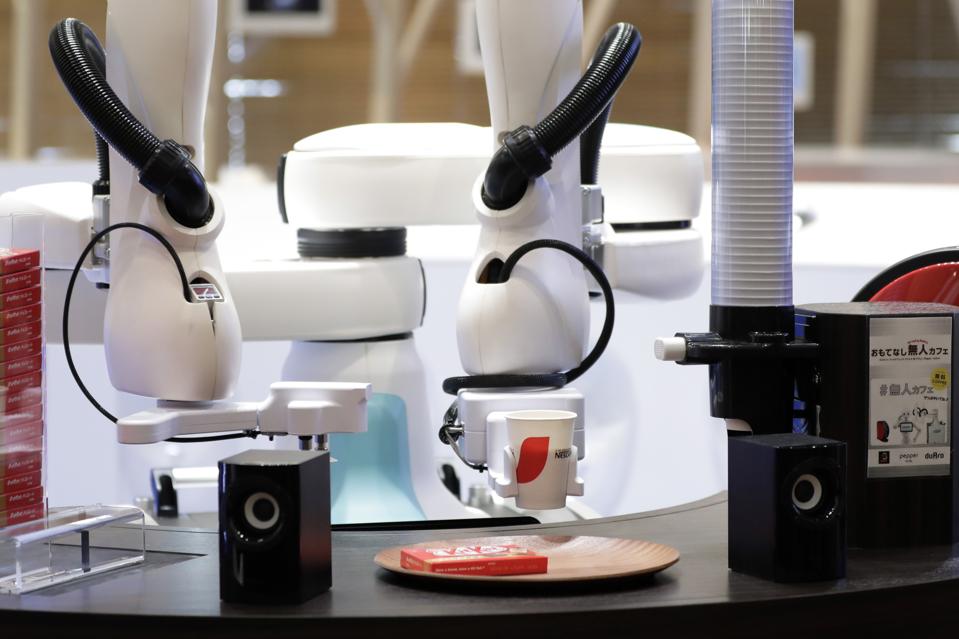 A Kawasaki Heavy Industries Ltd. two-armed duAro robot serves a cup of coffee during a media preview … [+] of the human-less cafe inside Nestle SA’s Nescafe coffee shop in the Harajuku district of Tokyo, Japan, on Thursday, Nov. 16, 2017. The staff-less cafe will open for 10 days from today. Photographer: Kiyoshi Ota/Bloomberg

When I read about how COVID-19 could accelerate the robot takeover of human jobs, I wondered: Is the acceleration of automation detrimental to innovation and customer experience in the long run? Are we going to see a repeat of mistakes we’ve made in the past?

First, automation is unstoppable. It starts by replacing dangerous, mundane and undesirable jobs. Eventually AI replaces human roles that it can outperform. Once it could only compete for manual labor, but now it can assume decision-making roles. As that decision-making capability becomes more robust, it will replace more humans at work. It’s inevitable that many human jobs will be eliminated. The technology exists to replace many more humans than we currently have. Recessions typically drive automation. This one may leave fewer jobs available as businesses rush to cut costs and stand up operations that don’t stop when humans get sick. But we’re a long way from a future where the only jobs left are for faith leaders. We still rely on humans to be creative and compassionate for now. Given these limits, will innovation and empathy suffer in the next wave of automation?

Consider the fate that befell Elon Musk when he rushed to fulfill his dream of a fully automated factory in 2018. Tesla met only half its goal to produce 5,000 cars that year. When asked about the cause of the shortfall, he said “Excessive automation was a mistake … Humans are underrated.” Humans are still the undisputed masters of context, creative problem solving and intuitive leaps. Too much automation too fast deprives a company of an army of observers who do so much more than tighten widgets or answer customers’ questions. I’m reminded of this 2006 gem from Gary Hamel:

“Unlike its Western rivals, Toyota has long believed that first-line employees can be more than cogs in a soulless manufacturing machine; they can be problem solvers, innovators and change agents. While American companies relied on staff experts to come up with process improvements, Toyota gave every employee the skills, the tools and the permission to solve problems as they arose and to head off new problems before they occurred. The result: Year after year, Toyota has been able to get more out of its people than its competitors have been able to get out of theirs.”

Consider the manager who has risen from the ranks of execution to inspiring those who execute. A good manager relies on her team to stay informed, surface ideas, identify problems or target efficiency improvements. She may drive what innovations follow, but she does this with their help. Imagine if she wasn’t allowed to talk to her front-line team or do anything but observe them quietly working away? If her job still existed, how much innovation could she continue to drive? This is the reality when your team consists of robots and process-automation software.

Consider call centers. The goal of an inbound call center is to resolve customer issues and ensure good experiences and satisfaction for them. We’re automating many aspects of customer touch points: automated call routing, chat, simple issue resolution and more. Businesses use such automation to reduce costs and improve efficiencies by minimizing human-customer contact. This may work in the near term but in the long run, without humans in the loop observing these interactions firsthand, can we still drive innovation? How do we spot opportunities for new product development or enhancements to current products?

It’s not just innovation that suffers. Automation can put an empathy wall between your company and the humans who support it. Without humans present for interactions, how can we better understand customer preferences? How can we learn more about the quality of user adoption or market preferences? What about the intangible insights, hunches and revelations derived from human-to-human communication? When we automate customer touch points, are we ready to lose loyal customers? A Vonage study recently indicated that 61% of customers who speak with interactive virtual assistants report a negative experience. Even worse, 51% report having abandoned a business because of such an experience. Some businesses can differentiate by avoiding automation where consumers expect it. When a company replaces a typically automated touch point with an AI-assisted, high-performing human, it can be a pleasant and brand-affirming surprise for consumers. Rushing to automation means missing out on these opportunities.

So what should we do? Do we avoid automation? We could no less do this than avoid the march of time. But we can move toward automation at a pace that does more good than harm to our business and customers. While we automate roles, we can think twice before letting the humans who occupied them go. We can reskill and upskill some employees so that they can use their familiarity with the business in new, more strategic or customer-facing ways.

We often forget that the ultimate objective of all business effort is to serve human beings. As we remove humans from business processes, we remove the human touch from them as well. When we start expecting human beings to conform to what AI drives as opposed to having AI adapt to what humans want, customers, employees and profits can suffer. Automation is inevitable. It can’t and shouldn’t be stifled. But those who drive decisions need to be aware of the cost—not just in human workers, but in the empathy and ingenuity they’ll take with them.