Breaking
Stock Market Crash: The End Game And Down...
Does Artificial Intelligence Design New Drugs Or Discover...
NBA 2K21: How To Download A Realistic 2021...
Ask Larry: When I File For Social Security...
Level UP With LinkedIn Live
AstraZeneca May Conduct Additional Trial For Covid-19 Vaccine...
Robert Smith Breakup Exclusive: Billionaire Brian Sheth Reveals...
‘Destiny 2’ Wants Season Of The Hunt Feedback,...
British Auto Makers’ Nervousness Over EU Trade Deal...
Want To Disrupt An Industry? Solve A Problem...
Life In 2020 AD: The Challenges Of The...
How Companies Are Adapting To Changing Customer Demand
Cyber Police Claim Double Win: Arrests In 50,000-Victim...
‘Tis The Season To Be Jolly Unless You...
The Physics Of Why You Must Never Deep...
Five Ways Holiday Shopping Will Be Different This...
Home Finance President Trump Preparing “Aggressive” Executive Action On Additional Stimulus
Finance 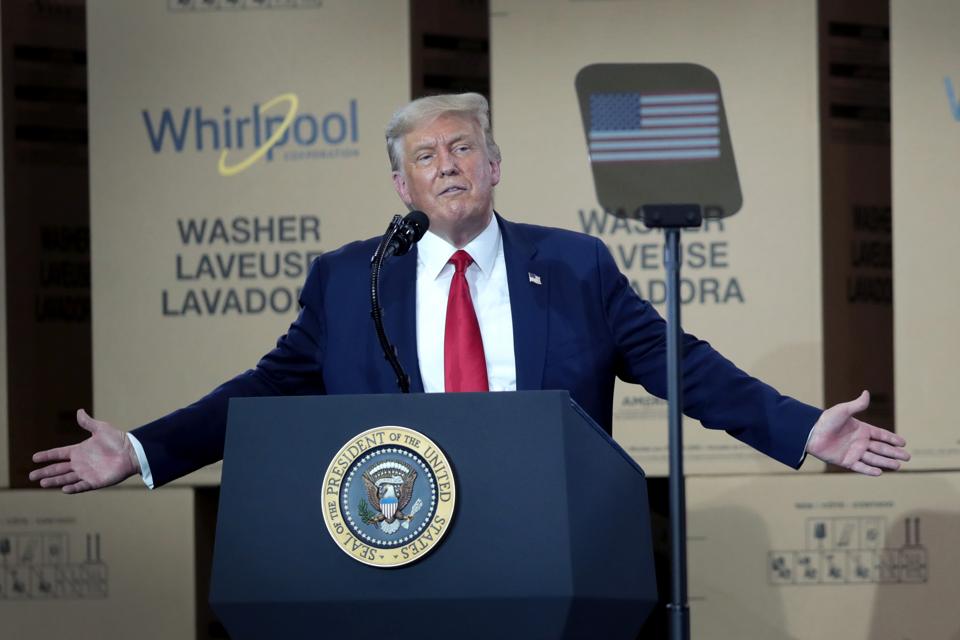 CLYDE, OHIO – AUGUST 06: U.S. President Donald Trump speaks to workers at a Whirlpool manufacturing … [+] facility on August 06, 2020 in Clyde, Ohio. Whirlpool is the last remaining major appliance company headquartered in the United States. With more than 3,000 employees, the Clyde facility is one of the world’s largest home washing machine plants, producing more than 20,000 machines a day. (Photo by Scott Olson/Getty Images)

The Hill reported that White House Chief of Staff Mark Meadows has said that President Trump is preparing “aggressive” executive action if lawmakers are unable to reach a deal on the next stimulus package in the next few days.

Treasury Secretary Steven Mnuchin and Meadows have been meeting with Congressional Democrats to hammer out an agreement on the next stimulus package. Senate Leader Mitch McConnell (R-KY) has been conspicuously absent from those negotiations because many Senate Republicans are against additional stimulus. The process has been that Mnuchin and Meadows will negotiate with House Speaker Nancy pelosi (D-CA) and Senator Chuck Schumer (D-NY) and then update Senator McConnell.

The two sides have made progress but still remain far apart on several key areas.

It’s not clear how this would be done but his team is now researching what could be done in these four key areas:

If the President and his team are able to figure out how to offer additional stimulus through executive action, what would these look like?

President Trump has long been a fan of a payroll tax cut. At a Virtual Town Hall at the Lincoln Memorial on May 3rd, he said that he would not accept a stimulus package that didn’t include one.

Ultimately, the payroll tax cut was not included in the HEALS Act as Senator McConnell worked to keep the cost of the bill as low as possible. President Trump responded by blaming Democrats.

The payroll tax refers to FICA, FICA, which is short for Federal Insurance Contributions Act, and it has two parts – Social Security and Medicare.

In total, you pay a FICA tax of 7.65% on your earned income. If you earned the median income in America of $63,000, you would get an additional $4819.50 per year. It’s not clear how long the cut would be for but it’s not inconsequential.

MORE FROM FORBESYour Second Stimulus Check May Be A Payroll Tax Waiver: How Does That Help You?By Jim Wang

Also in negotiations, Republicans offered to include an eviction moratorium that would last through December 15th. The previous eviction moratorium, created by the Cares Act, protected renters who were in buildings that had mortgages secured by the federal government. Landlords were not able to initiate eviction proceedings but that moratorium ended on July 31st.

The previous $600 per week unemployment insurance benefit created by the Cares Act expired on July 31st and House Democrats hoped to extend it through January 2021. The included it in the Heroes Act, which they passed back in May.

Earlier in the week, Senator McConnell said that he would be willing to support unemployment benefits at the $600 per week level.

The Cares Act put federal student loans into administrative forbearance with an interest rate of 0% through September 30, 2020.

Secretary Mnuchin and White House Chief of Staff Mark Meadows continue to meet with Senator Schumer and Speaker Pelosi but it’s not likely that they will reach an agreement by tomorrow.

If President Trump’s team is able to find a path forward to offer up some relief to Americans through executive action, it’s possible that he will take that step.

On July 31st, enhanced federal unemployment benefits and the eviction moratorium expired and time is running out for Americans who are truly struggling.

Why The Senate GOP Stimulus Package’s Future Seems So Bleak

How Soon Could You Get A Second Stimulus Check?

Second Stimulus Check Income Limit Will Likely Be Higher Than $40,000