Breaking
Florida Supreme Court Tells The American Bar Association...
How to Write Perfect Paid Social Media Marketing...
How To Boost Productivity In Your Small IT...
How Restaurants Can Design a More Sustainable Food...
Expenses That Small Business Owners Need to Be...
How You Can Make Saying Goodbye To The...
Biden To Meet Royal Family At Cornwall’s Eden...
It’s Going To Be Emotional — Going International...
Peer Mentoring For Students: STEM & Buds
7 PR Trends in 2021: The Story So...
Google Plans Radical New Google Pixel Smartphone Upgrade
Where Did COVID Come From?
Ride To Growth With A Business Vehicle
C3.ai’s Tom Siebel: How To Scale AI
Moz Acquired by iContact Marketing Corp
10 Examples of Brands Using TikTok Stitch and...
Home Finance President Trump Says He Was Tested For Coronavirus, Will Suspend Travel From The U.K. And Ireland
Finance

President Trump Says He Was Tested For Coronavirus, Will Suspend Travel From The U.K. And Ireland 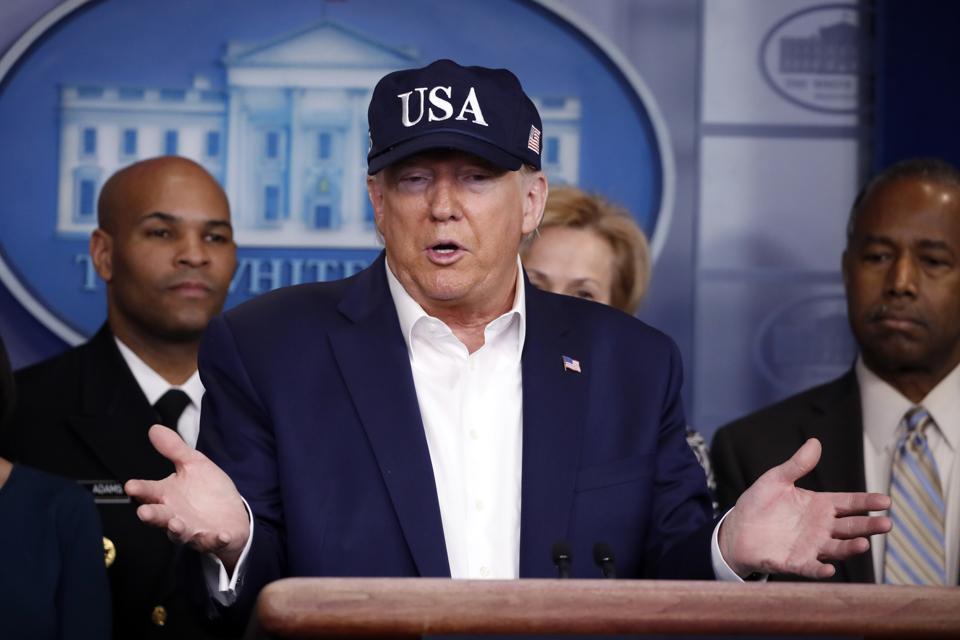 New York also reported its first death linked to the virus on Saturday.

Topline: At a press conference on Saturday with members of the coronavirus task force, President Trump said he has been tested for the coronavirus as Vice President Mike Pence pledged to “implement the president’s vision” with regard to a public/private partnership for testing and helping state and local governments mitigate the crisis.

Crucial quote: When pressed about shaking hands with multiple people at a press conference yesterday where he declared a national emergency, Trump said that handshaking “almost becomes a habit.” He followed up: “shaking hands is not a great thing to be doing right now, I agree.”

Tangent: Apple announced yesterday that it will close its stores outside China for the next two weeks. “In our workplaces and communities, we must do all we can to prevent the spread of COVID-19. Apple will be temporarily closing all stores outside of Greater China until March 27 and committing $15M to help with worldwide recovery,” Apple CEO Tim Cook tweeted on Saturday.

Key background: According to Johns Hopkins, there are currently 147,838 confirmed cases of the virus worldwide and there have been 5,539 deaths so far. In the U.S., the outbreak has now spread to 49 states. On Friday, President Trump declared a national state of emergency that will free up $50 billion in funding for relief efforts in the United States. House Speaker Nancy Pelosi also announced on Friday that the House of Representatives and the Trump administration had reached a deal on a coronavirus relief package that is expected to direct tens of billions of dollars to address the pandemic, including provisions for free coronavirus testing, paid sick leave and food assistance for Americans in need. The Senate has not voted on the bill yet.

Atlanta Will Have To Get Back In Line For Final Four