Breaking
How To Get Your Startup Business Off The...
How To Create A COVID Safe Construction Site
How to Make a Good First Impression at...
3 Marketing Mistakes Holding You Back From Hitting...
Is The Matter In Our Universe Fundamentally Stable...
Majority Support Covid-19 Price Controls Says New Brookings...
Reimagined Pan-Mass Challenge Approaches $41M 2020 Fundraising Goal
Is Bitcoin Poised To Bounce Back After Its...
These ‘Temporary’ COVID-19 Changes Will Become Permanent
How Will Our Mental Health Be Affected By...
Selling A Business During A Pandemic: When Talented...
Top 10 Digital Transformation Trends For 2021
Two Veteran Entrepreneurs Aspire To Clean Up America’s...
PPP Forgiveness Applications Are Opening Up. Should You...
Best Domain Registrar
Free Tech For Black Founders Initiative Saves Startup...
FinCEN Files Scandal Is Unlikely To Change Anti-Money...
GDP Vs. GNH: Rethinking What A Healthy Economy...
Global Consumer Sentiment Barely Inches Up As Coronavirus...
Home Finance President Trump Signs Executive Orders: $400 Unemployment Benefit, Payroll Tax Holiday, Student Loan Relief, Eviction Moratorium
Finance 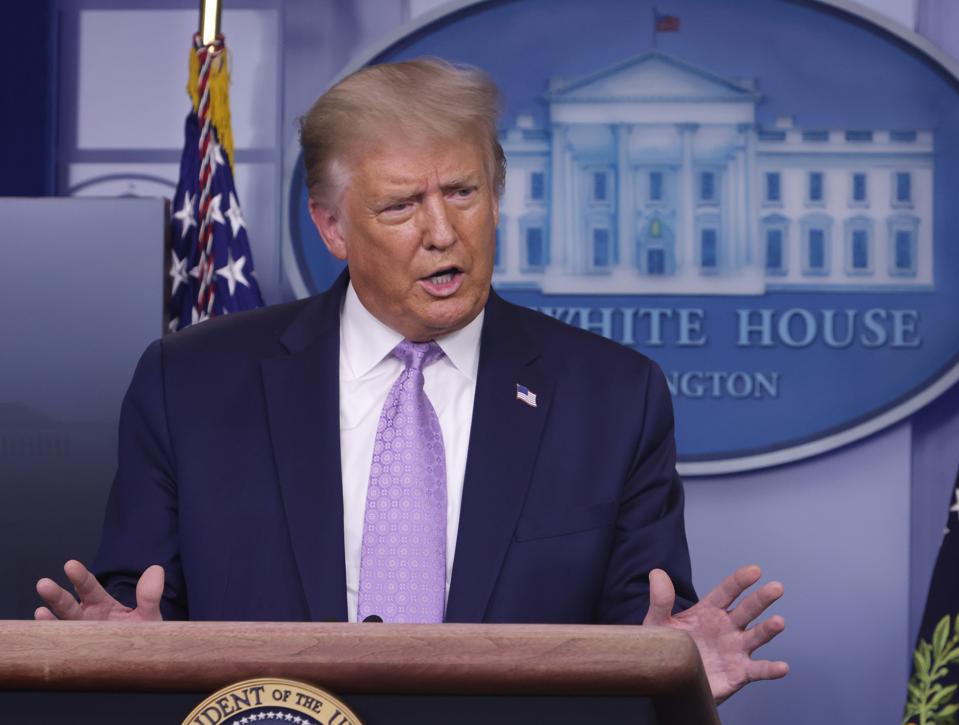 Mr. Trump announced a $400 weekly enhanced unemployment benefit. This is $200 less than the CARES Act and what House Democrats proposed in the HEROES Act, but $200 more than proposed by Senate Republicans in the HEALS Act. It’s also consistent with the offer extended to the Democrats during negotiations over a stimulus package.

He said that states will be asked to cover 25% of this cost using existing funding, such as funds available to states through the Coronavirus Relief Fund. The federal government will cover 75% of the cost.

Mr. Trump also signed an executive order for a payroll tax holiday for those earning less than about $100,000 a year. Specifically, he signed a directive instructing the Treasury Department to allow employers to defer a certain portion of payroll taxes from August 1st or September 1st, details to follow. As provided in the executive order, the payroll tax holiday applies to individuals who’s compensation “during any bi-weekly pay period generally is less than $4,000, calculated on a pre-tax basis, or the equivalent amount with respect to other pay periods.”

Further, if he wins the election in November, he says he’ll forgive these taxes and make these tax cuts permanent. He also said he may extend the payroll tax holiday beyond the end of the year.

The President will also sign a directive instructing the Department of Housing and Urban Development to make sure renters and homeowners can stay in the homes. He did not provide details on how this eviction moratorium would be structured. He’s also directing HUD to provide financial assistants to struggling renters and homeowners, and work with landlords and lenders to implement this policy.

The executive order, among other things, instructs the Secretary of Health and Human Services and the CDC to consider whether an an eviction moratorium is reasonable necessary to prevent the further spread of Covid-19 from one state to another. It also directed the Treasury to identify funds that can be used for temporary assistance to renters and homeowners.

Here are additional resources to follow this developing story:

This story will be updated as additional information becomes available.