President Trump: ‘We’re Paying People Not To Go To Work’ 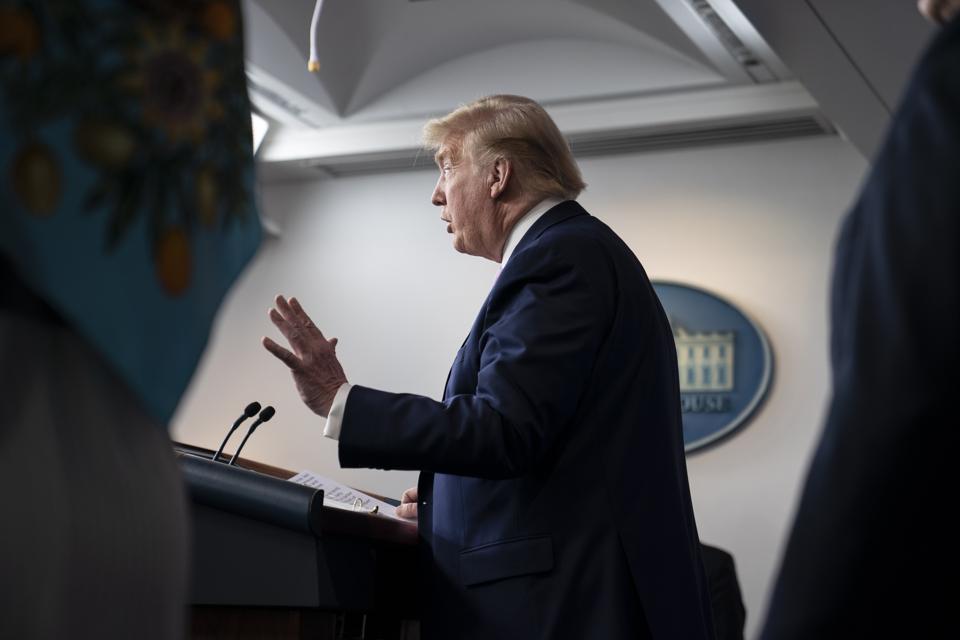 WASHINGTON, DC – APRIL 04: U.S. President Donald Trump speaks at a press briefing with members of … [+] the White House Coronavirus Task Force on April 4, 2020 in Washington, DC. On Friday, the CDC issued a recommendation that all Americans should wear masks or cloth face coverings in public settings to slow the spread of the coronavirus (COVID-19). (Photo by Sarah Silbiger/Getty Images)

Topline: A few days after saying the United States would have “a very tough two weeks” as the White House predicted up to 240,000 deaths from the COVID-19 coronavirus even with full mitigation policies, President Trump was back to his message that the country needs to open as soon as possible, saying “We don’t want to be doing this for months and months and months.”

Tangent: In his comments about hydroxychloroquine, Trump suggested people with the autoimmune disease lupus that take the medicine regularly were at less risk of the coronavirus, a claim that was soon shot down by Fauci. People with lupus are actually more vulnerable to diseases like the coronavirus, according to the Lupus Foundation of America.

Crucial Quote: Again, Trump pointed to America’s boom-then-bust economy under his administration as the reason to reopen the country, but on Friday, World Health Organization Director-General Tedros Adhanom Ghebreyesus said, “If countries rush to lift restrictions too quickly, the virus could resurge and the economic impact could be even more severe and prolonged.”

Key Background: The U.S. crossed 300,000 confirmed cases of the coronavirus on Saturday, more than Italy and Spain’s cases combined. The death toll has reached 8,175, with 38% of the deaths occurring in New York state.

Free Money For Small Business: Two Loans You May Not Have To Repay–That You Should Apply For Now

Own A Small Business During COVID-19? This Social Venture Can Help