Priced For More Than Perfection, Markets Have Dismissed Economic Reality 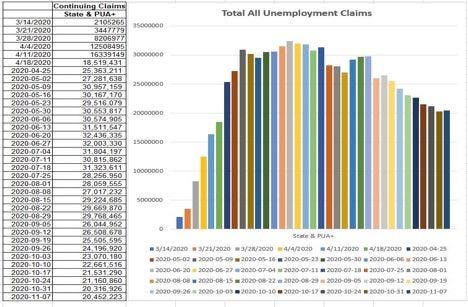 The holidays are upon us, and we wish our clients and friends health, peace and happiness.

Recent income, output, and employment data have turned sour. We’ll see what that does to holiday shopping.

The financial markets, especially equities, have looked past the valley (abyss), and the vaccine news has enhanced the view that “normal,” or at least a “new normal” is just maybe a quarter or so away. The DOW set an all-time high (30,000+) this week.

Despite the narrative on Wall Street regarding the resurgence of inflation, it will be quite a while before bond yields can actually rise.

With the resurgence of the virus and new business restrictions in some districts, what happens to equity markets if the timing to the re-establishment of “normal” becomes widely recognized as several quarters away?

Temperature of the Markets

For most of the market’s history, at least until the new monetary policies adopted during the Great Recession, financial markets were somewhat tied to the underlying economy. Not that they didn’t deviate; they often did. We called these “bubbles.” Eventually, the bubbles burst and markets, once again, reflected economic reality. But since the Great Recession, central bank intervention into financial markets has suspended true market price discovery. And, now, it seems, even the Fed believes that it, alone, doesn’t have the tools to keep the economy afloat. For at least the past two months, Fed Chair Powell has asked the Congress to enact additional stimulus programs, and we now find that the policy making arm of the Fed, the Federal Open Market Committee (FOMC) is of the same view. Here is an excerpt from the FOMC November minutes:

“…several participants expressed concern that, in the absence of additional fiscal support, lower- and moderate-income households might need to reduce their spending sharply when their savings were exhausted…”

And:   “…households appeared to be rapidly exhausting funds they received from fiscal relief programs…”

While markets have pinned hopes for a quick return to “normal” on the rapid distribution of the vaccine and acceptance of it by the American public (both of which remain a question mark), they have ignored the potholes between today and that herd immunity.

Remember, the last fiscal stimulus package cost the U.S. government $3.3 trillion; and that only increased Q3 GDP by just over $400 billion. Without that stimulus, Rosenberg Research estimates that Q3 GDP would have fallen an additional -6% (on top of Q2’s -33%). And, remember too, out of the 160 million people in the labor force, more than 20 million remain unemployed (see chart above). While the markets believe that there will be another stimulus once Biden takes office, that event is still nearly two months away. And the wage gains that may currently be occurring are falling far short of offsetting the loss of new fiscal stimulus. Spending has been supported primarily by a run-down in the savings rate which was boosted sharply by the CARES Act stimulus. Unless the Trump Administration is willing to act, the earliest another stimulus could occur would be late February/early March. And the size and shape of such a stimulus is largely dependent on the outcome of the January 5th Senate elections in Georgia. In the interim, there is the potential U.S. government shutdown on December 12th, and worse, the end of the eviction and mortgage foreclosure moratoriums, as well as loan payment forbearance at year’s end. Markets are making a lot of positive assumptions about how all of this will play out! Here is a list of recent data and other observations regarding the economy:

·     More than half of households have less than a two-month supply of cash (an observance in the FOMC minutes);

·     Deflationary pressures are apparent throughout the world; this despite the recent rise in the price of oil and of some commodities:

·     CARES Act programs have supported nearly half (48%) of the unemployment benefits paid in September (of the $365 billion of benefits, $176 billion were from CARES Act supplements); these will cease on December 31st. This means that they will stop dead, not when a person has exhausted their eligibility;

·     Consumer spending growth looks like this (detect a pattern?):

·     Here are some recent headlines from the Wall Street Journal (WSJ):

All of this leads me to conclude that Q4 GDP will be flat to down, and, even with stimulus from the Biden Administration (a February/March event), Q1 GDP could also be negative.

So far, markets, buoyed by vaccine news, have looked past these potholes. But, equities are at nosebleed valuations (based on history). There is a significant risk for the equity market if the view that the economy will take much longer to heal becomes the “consensus” view instead of the “outlier” one.

The business media mentioned, only in passing, that the Initial Claims (ICs) data from the states’ regular unemployment programs rose 30K the week ended November 21st, from 748K to 778K. Not another word or any analysis. The data referred to are “seasonally adjusted.” As explained in past blogs, seasonally adjusting data created by non-seasonal events and economic shocks makes no sense. In fact, it can be outright misleading, as such events (shocks) are not seasonal (i.e., they don’t occur every year). The unadjusted data tell the real story. Using unadjusted data, we see that the state programs actually had a rise of +78K to 828K.

When the special Pandemic Unemployment Assistance (PUA) program ICs are added, there were 1.149 million new claimants (i.e., layoffs) during the week ended November 21st, up from 1.079 million the previous week. Think about that! Nine months into the pandemic shock, and layoffs are still more than a million per week! And, now, because of the resurgence of the virus, we have renewed business restrictions in many jurisdictions. That implies rising layoffs in December!

Over the past couple of months, there have been several mini-up moves in the Treasury yield curve. Expectations, or at least Wall Street talking points, are that, with the coming “new normal” on the other side of the abyss, inflation is going to make a gigantic comeback. Rates will rise. Stay away from gold. Keep bond holdings short-duration.

Let’s think about this. Debt, at all levels has skyrocketed. In the last blog, I talked about “zombie” companies which have added over $1 trillion of debt during the pandemic period (with the help and encouragement of the Fed!). This, plus the CARES Act debt, has brought debt, at all levels, to 400% of GDP. Let’s do some quick and dirty math: a 1 percentage point (100 basis points) upward shift in the yield curve would shave -4% from GDP (i.e., .01*400%), as the money available for consumption/investment would have to go to pay higher interest rates (the example is simplified, but you get the drift). That, alone, is a recession with the severity characteristics of ’08-’09. That math says rates can’t (won’t) rise. Besides, the Fed itself has pledged to keep rates at the floor for several more years.  A reading of the FOMC minutes shows how nervous they really are.

And, now, we are going to have the Yellen/Powell duo. Powell has already sacrificed the Fed’s independence and given it to the Treasury with his pledge to monetize any and every deficit. The M2 chart tells me that we have already adopted Modern Monetary Theory (MMT) (i.e., you can print as much money as you want to) and that was in a Republican Administration!

The DOW set a new all-time high this past week (30,000+). However, given the state of the economy, this represents nosebleed valuation levels.

The economic data have turned sour; that includes income, output and inflation data. We’ll see what happens to spending in the next few weeks of holiday shopping, and we should know the results from Black Friday soon!

Employment data, too, tell the story of a stalling recovery. This isn’t a wonder with the resurgence of the virus.

What happens to equity values if the consensus Wall Street view becomes one where the economy takes much longer to heal?