Breaking
ESBC Major Updates: Tons Of Heavyweight Greats Added...
5 On-Demand Courses To Help Develop Your Leadership...
How to Run Nonprofit Marketing Ads
Entrepreneurs Are Bringing Transparency To Home Buying And...
Best Incentive To Get Vaccinated: Money, Messaging, Or...
Page Level Query Analysis at Scale with Google...
How A CIO Can Align IT With Business...
Blogger of the Month: Jo, Girl Eats World
6 Things Women In Business Know That Men...
How to Use First-Party Data for Ad Personalization
Pressing Reset—Putting A Fallen Unicorn Back On Its...
How We Went Viral: Promoting Content with Influencers,...
Blame Olympic Record Price Tag For Return To...
Apple iOS 14.5 Release: Should You Upgrade?
How to Come up with Podcast Topics and...
Why Gaming Gear Company Razer Launched A $50...
Home Technology Prior To Carlos Ghosn’s Daring Escape, His Wife Talked Of Japan’s ‘Fake Democracy’
Technology

Carole Ghosn may not have helped her husband Carlos escape from Tokyo to Beirut. But she has no doubt the Japanese legal system treated him inhumanely, and she’s fighting back.

That’s the upshot of my telephone interview with Carole Ghosn on December 27, two days before her husband skipped bail in Japan, where he’d been accused of financial misconduct, and fled to his Lebanese homeland.

“We thought Japan was part of the G7, that it’s the third-largest economy and looks so civilized,” Carole Ghosn said. “But then you find out you can get interviewed with no lawyer present, and get detained for as long as they want even though they have no proof.”

“They’re all lying. They have a fake democracy,” she said. “It’s now so clear to us how Japan functions, and it’s shocking,” 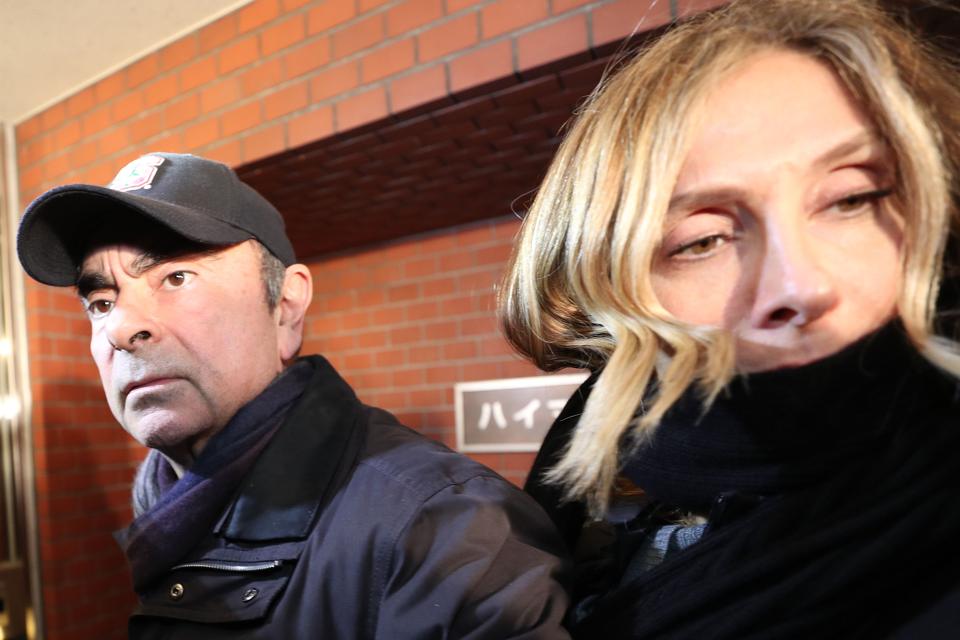 Carlos Ghosn and his wife Carole arrive at their residence in Tokyo on March 2019.

In the media stampede following Ghosn’s Monday arrival in Beirut, Le Monde and others reported that Carole Ghosn helped arrange the private jet that hustled her husband out of Japan. Ghosn denied that on Thursday. “I alone organized my departure,” he said.

Ghosn’s denial seemed aimed at protecting his wife from growing government anger in Japan and Turkey, where his plane is said to have made an unauthorized stop. At Japan’s behest, Interpol issued a wanted notice for Ghosn on Thursday. Turkish authorities arrested seven people, including four pilots, for helping Ghosn’s escape.

Carole Ghosn made no mention of such plans during the December 27 interview. Her comments – a potential preview of a Carlos Ghosn press conference scheduled for Wednesday — were all aimed at publicizing her husband’s defense in advance of a trial expected in a few months. Her comments included an emotional description of his treatment since his November 2018 arrest by a Japanese legal system eager to uphold its 99 percent conviction rate.

“They wanted to break him. They wanted him to confess,” Carole Ghosn said. “It’s important to show how cruel they are,” she said.

At the time of his arrest, Ghosn was still leading an alliance among Nissan, Renault, and Mitsubishi that would go on, during the first eleven months of 2019, to sell 9.2 million vehicles. That’s more than any other automaker except Volkswagen and Toyota. But in his Tokyo detention center, Carole Ghosn said, inmates are held in unheated cells with no hot water.

Carlos Ghosn spent 130 days in solitary confinement, she said. Even after being released on bail, he couldn’t use the Internet except in his lawyer’s office. He had to report every person with whom he spoke, and he couldn’t talk with his wife at all except for a one-hour video conference in November. At one point, she said, Japanese authorities seized her phone, her laptop, her diary, and the private letters she’d been sending to Ghosn each day. “And to think,” she said, “that in the U.S. or Europe, Carlos would not have done one day of jail time for this.”

Ghosn earned $17 million from the alliance partners in 2017, according to Bloomberg News, but always maintained he could have received much more if the Japanese public had tolerated the lavish executive pay found in the U.S. and elsewhere. He kept a running count of how much more and fully intended to collect the difference, even if that meant disguising it as a post-retirement consulting fee, according to a U.S. Securities and Exchange Commission complaint. Ghosn settled with the SEC and paid a $1 million fine without admitting wrongdoing, according to Bloomberg.

In the interview, Carole Ghosn acknowledged that Ghosn felt underpaid. But she asserted that Nissan thought so, too, and was looking for “perks” that would keep him from accepting an outside job offer. “At the end of the day, he did not take any money. He got arrested for future bonuses that he didn’t sign off on, and neither did the board,” she said. “Carlos was not running a ‘mom and pop’ shop. They had lawyers and accountants. He was not the only one to sign off on things.” 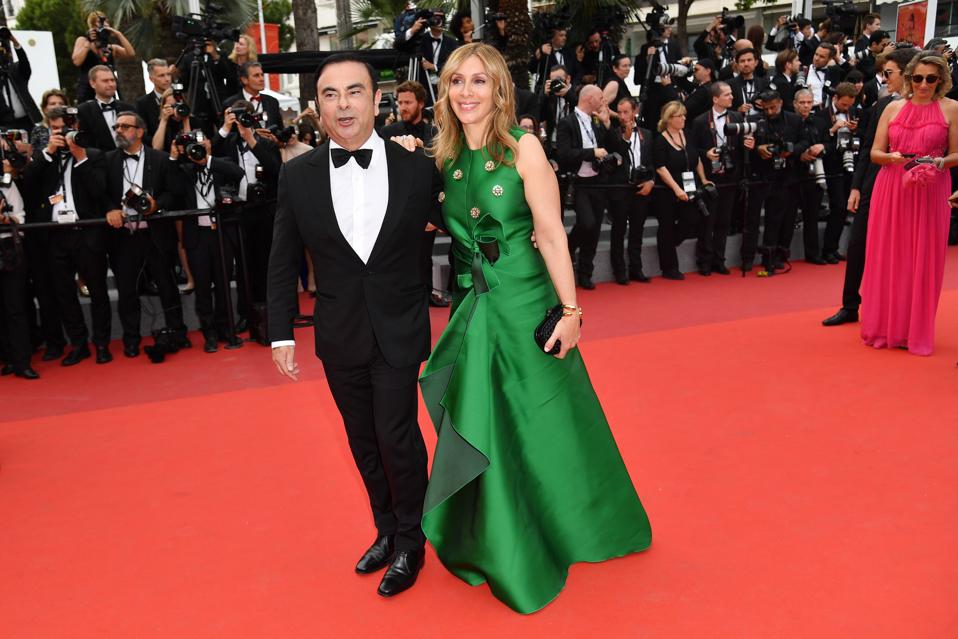 Carlos and Carole Ghosn attend the Cannes Film Festival in 2017

Carlos Ghosn, 65, divorced his first wife in 2012 and married Carole, 53, a Lebanese-born New Yorker, four years later. They celebrated with a Marie Antoinette-themed wedding at the Palace of Versailles. Carole is a shareholder in a Virgin Islands company that received payments from a Nissan distributor in the Middle East, according to Bloomberg. But she said Japanese authorities interviewed her about these payments in April and cleared her of any wrongdoing. “I have nothing to do with the case,” she said.

The roots of the dispute, in Carole Ghosn’s view, are simple.

After rescuing Nissan from bankruptcy starting in 1999, and in doubling its size since then, Ghosn had become convinced that the company needed a full-blown merger with Renault and Mitsubishi. Moving beyond their current loose alliance in which they share specific functions like purchasing and research angered some people in Nissan’s Yokohama headquarters. This was true partly because Nissan generated most of the profit in recent years, Carole Ghosn said, and partly because Japan has never shed its nationalist and anti-foreign heritage.

Some Nissan executives conspired directly with the Japanese government’s Ministry of Economy, Trade and Industry, Carole Ghosn said, to take down Ghosn and sabotage the planned merger. She specifically named Hitoshi Kawaguchi, who left the company last month. Nissan declined to comment on his departure, according to the Wall Street Journal.

“They did not want the merger with Renault,” Carole Ghosn said. “They don’t want anything to do with the French.” And, she said, these nationalist insurgents only succeeded in damaging themselves – shares of both Nissan and Renault have dropped by about a third since Ghosn’s arrest. And according to the Wall Street Journal, the company is expected to earn just $1 billion for the fiscal year ending in March, compared to $7 billion in Ghosn’s last full year.

None of this means Ghosn didn’t break the law, or even that he wasn’t a lousy chief executive. That’s what former General Motors Co. vice chairman Robert Lutz told CNBC on Thursday. Ghosn “showed all the signs of believing himself to be omnipotent,” Lutz said.

Even if Lutz is right, a potential loser could be Shinzo Abe, the Japanese prime minister who came to power seven years ago promising to make Japan a haven for the global capitalist elite. Toward that end, Abe has prodded corporate Japan to pay more attention to shareholders and outside directors and to disclose the cozy and often inefficient cross-shareholdings that were a major target for Ghosn when he arrived in Tokyo two decades ago.

But now, Abe will have to contend with a Carlos Ghosn who’s no longer facing an extended prison sentence, and who may criticize Abe’s reforms as inadequate to clear his name. 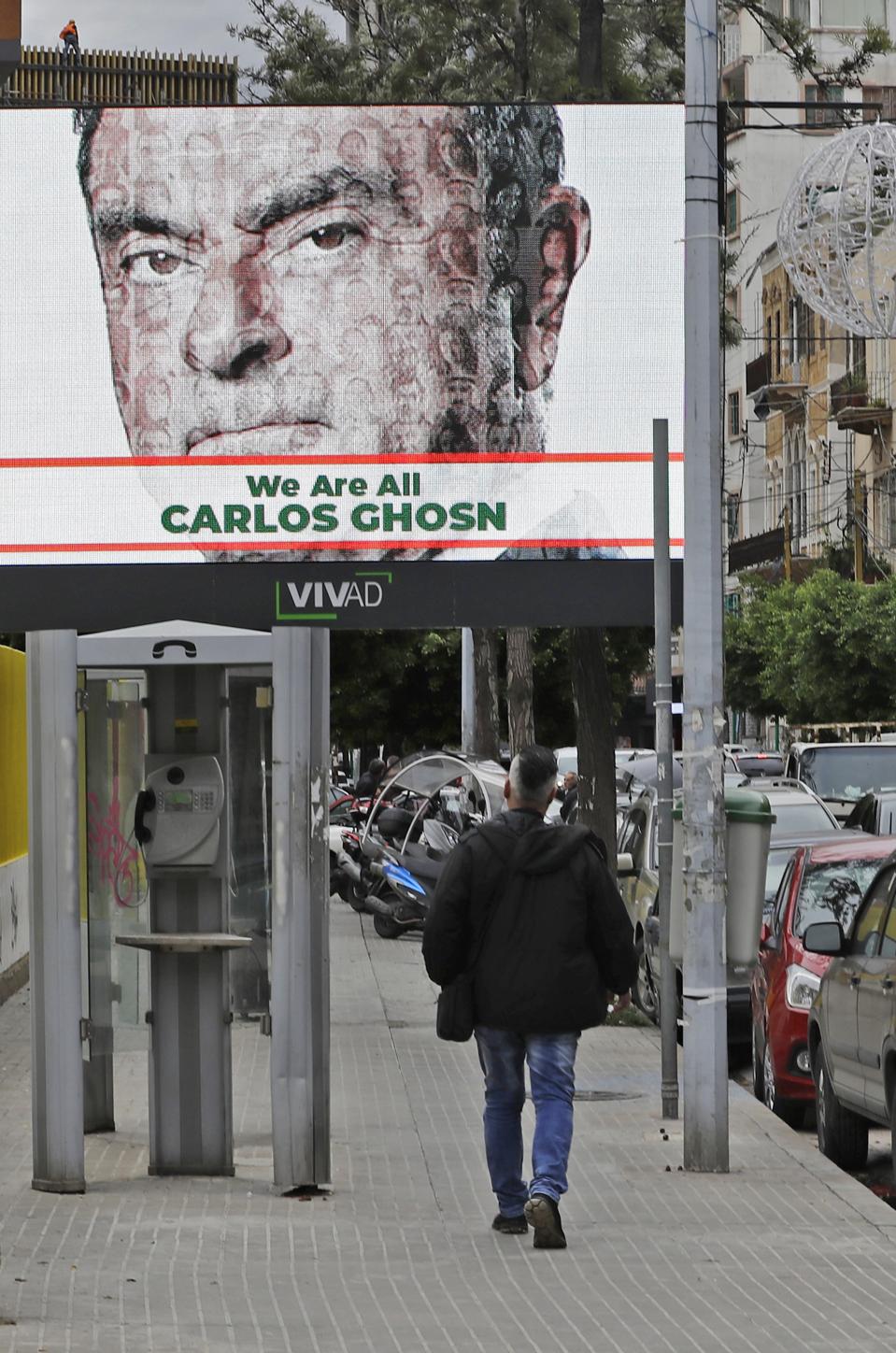 Billboards supporting Carlos Ghosn appeared in the streets of Beirut in December 2018.

In Lebanon, billboards greeted Carlos Ghosn last year as a hero. But since the escape, according to Koji Endo, an SBI Securities analyst in Tokyo, Japanese public opinion is “99 percent” against Ghosn, who’s seen as using his wealth to flee legal penalties in a way nobody else could. Ghosn’s flight means there will never be a judicial decision the Japanese public will accept, Endo said. And the Nissan-Renault alliance could be even harder to fix than before.

For Carole Ghosn, what happened to her husband is part of the worldwide populist backlash against globalization itself. “I think Japan is going back to Japan Inc.,” she said. “They’re a country which has always been known as very nationalistic. Look at the history. Nothing has changed.”

During her time in Japan, Carole Ghosn has come to resent the word “gaijin.” It’s commonly used to refer to foreigners, but she says its literal translation is “savage.”

Said Carole Ghosn, “to call a foreigner savage, I think that is quite racist.”

U.S.-Iranian Tensions Will Keep Oil Prices On The Boil