Feared by the majority of people worldwide and facing numerous threats (such as overfishing and bycatch, habitat destruction, climate change and plastic pollution), the pressure that faces sharks and their relatives seems at an all-time high. The International Union for Conservation of Nature (IUCN), estimates that over 30% of shark and ray species are threatened with extinction, as classed in the IUCN Red List of Threatened Species™. Thankfully, recent protections put in place for sharks, rays, and sawfish are helping ease some of these pressures.

In November 2019, two species of sawfish that were formerly classified as (A) Amenazadas, or Threatened, by Mexican legislation, were uplisted to (P) En Peligro, or Endangered. An unusual-looking animal, they are a type of ray found in both marine and fresh water. Their common name comes from their long snouts (called a rostrum) lined with sharp ‘teeth’ made of modified scales, and are covered in electromagnetic sensors that allow them to detect prey buried in sand and mud, such as crabs and prawns. Overfishing and habitat change have caused major declines in sawfish stocks globally, including for the two species uplisted in Mexico, the smalltooth sawfish (Pristis pectinata) and the largetooth sawfish (P. pristis). 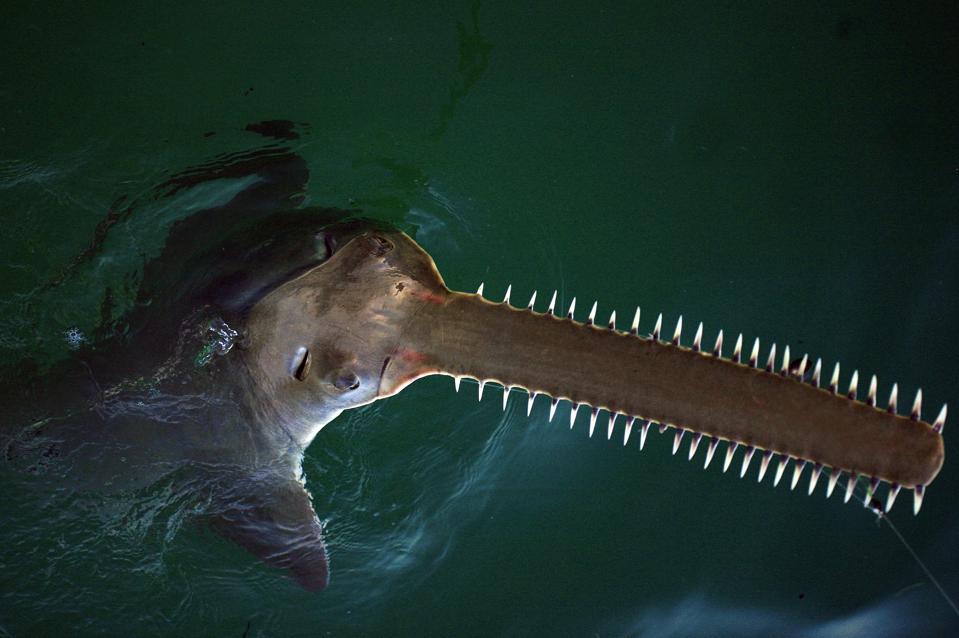 An unusual-looking animal, sawfish are a type of ray found in both marine and fresh water.

In addition, six species of rays (genus Mobula) that live in Mexico are included in the list of species at risk of extinction under the classification (Pr) Protección Especial, or Special Protection, due to their biological fragility, high vulnerability to fisheries and the human threats they face globally. “The publication on 14 November of the Modifications to Annex III of the Official Norm for the protection of species at risk of extinction NOM-059-SEMARNAT-2010 marks a significant boost for the better conservation of two species of sawfish and six species of manta and devil rays in Mexico,” says Dr. Ramón Bonfil, executive director of Océanos Vivientes, a Mexican Non-Governmental Organisation (NGO) championing elasmobranch conservation and research. Dr. Bonfil is also the author of the technical studies justifying the inclusion of these ray species in the new legislation.

Océanos Vivientes A.C. is the only institution doing research and conservation work for sawfishes in Mexico, in addition to contributing towards conservation and research for manta and devil rays. Mexico is famous for the tens of thousands of mobula rays that visit the coast lines of the Sea of Cortez in Mexico’s Baja California peninsula every year. One of the largest congregations in the world, these rays can be often seen performing flips and somersaults while jumping almost 10 feet (3 meters) out of the water! The technical studies that supported the proposals for the inclusion of manta and devil rays in this updated list and the re-categorization of sawfishes in the NOM-059-SEMARNAT were prepared by Dr. Ramón Bonfil.

Above Mexico, the United States of America was making waves in its own way for sharks and their relatives. The U.S. House of Representatives passed the bipartisan Shark Fin Sales Elimination Act (H.R. 737) late last year, prohibiting the sale, purchase, and possession of shark fins or any product containing shark fins, except for certain dogfish fins, in the United States. Introduced in January 2019 by Representatives Gregorio Kilili Camacho Sablan (I-MP) and Michael McCaul (R-TX), the bill passed by a vote of 310-107 after amassing 288 cosponsors. “More than a quarter of shark species and their relatives are at risk of extinction. Passing legislation to clamp down on the global shark fin trade is essential if we are going to protect sharks and maintain functioning marine ecosystems. We are grateful to Representatives Sablan and McCaul for their steadfast leadership and urge the Senate to quickly pass the Shark Fin Sales Elimination Act so that it can be signed into law,” said Animal Welfare Institute (AWI) President Cathy Liss. 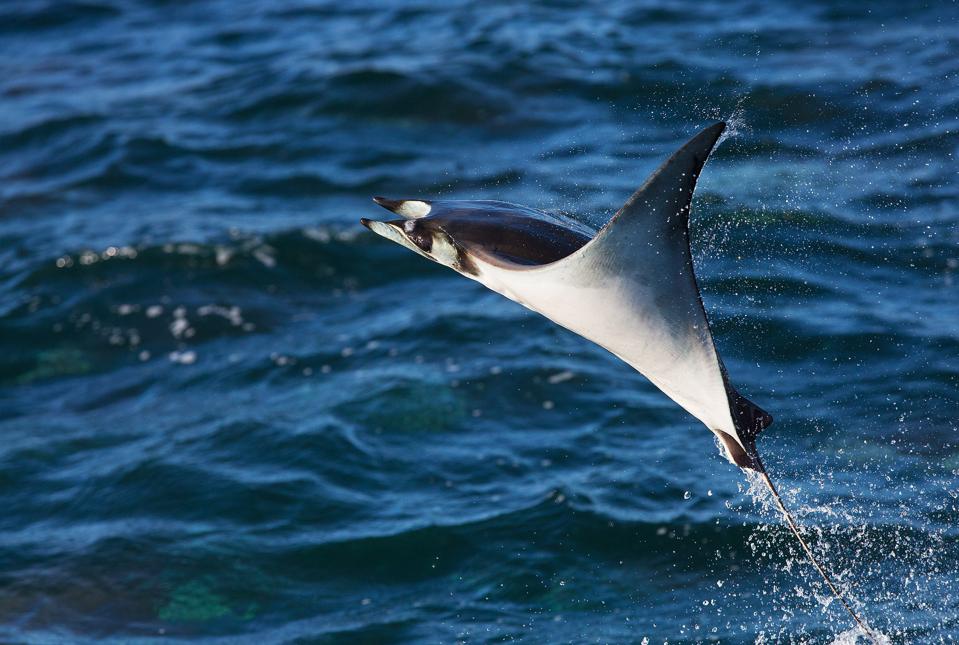 The jaw-dropping aerial drone footage shows the school of thousands of the flying rays slowly … [+] swimming in formation, taken in Baja, Mexico.

The new bill allows a person to possess a shark fin that was lawfully taken consistent with a license or permit under certain circumstances. What is not a lawfully-taken fin? Any taken through ‘shark finning.’ The official definition of shark finning is “removing the fins from a shark while still on the fishing vessel and dumping the rest of the shark overboard.” ​Not only is this practice incredibly wasteful (less than 10% of the weight of a shark is used) but it is cruel as the sharks are still alive when they are thrown back into the ocean where the animals bleed to death, are eaten alive, and drown. Most sharks need to be constantly moving in order to breathe through a process called ram ventilation; without their fins this is not possible.

Why is there such a demand for shark fins? Shark fins are in high demand particularly for those selling shark fin soup, a delicacy in traditional East Asian coups and other dishes. According to an online database maintained by AWI, nearly 200 restaurants across the USA continue to offer shark fin products.

But not all fin products are the same. In fact, some fins have been legally and sustainably obtained. Due to this, some shark scientists have come out against a nationwide ban on the sale of shark fins within the United States, stating it would “undermine sustainable shark fisheries, would have little effect on global shark mortality, and would perpetuate the misconception that the shark fin trade is the only threat facing sharks.” While there has been rebuttals to this stance, the scientists maintain that “placing a priority on policies focusing on sustainable shark fisheries management is preferred for meeting the goals of shark conservation.” 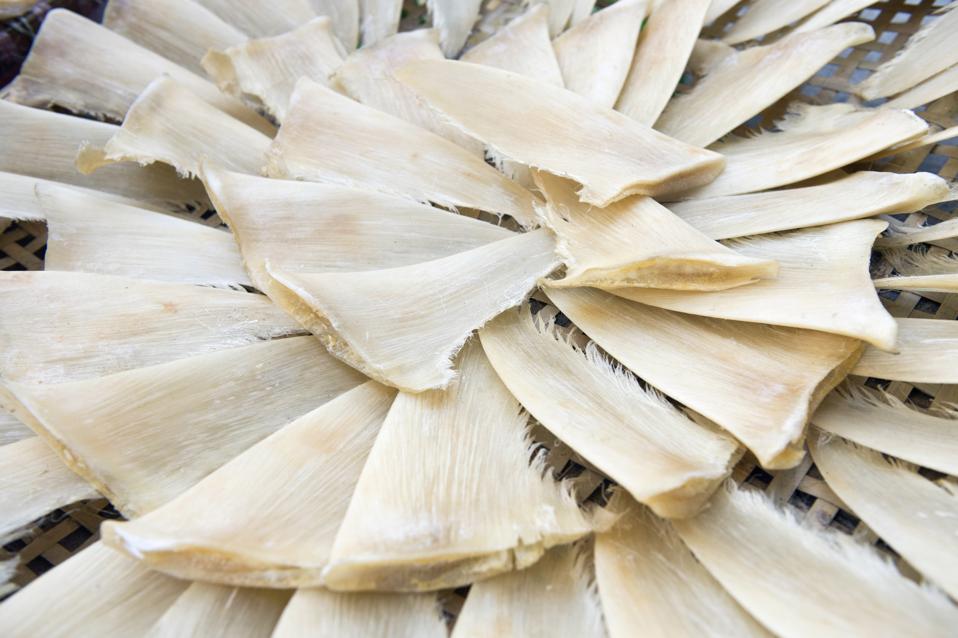 Shark fin soup has long been a luxury enjoyed by Asia’ wealthy, but environmentalists say shark … [+] populations around the world have been decimated by its consumption.

This isn’t the first time Congress has voted on shark fin related matters. In 2000, they passed the Shark Finning Prohibition Act (banned the possession of shark fins in U.S. waters absent the rest of the shark’s body) and in 2010 the Shark Conservation Act (requires fishermen in U.S. waters to bring sharks ashore whole, with their fins attached) was passed; currently twelve states and some territories have bans on selling shark. Northern neighbor Canada banned shark fin imports and exports in June 2019, a huge change as they were once the largest importer of shark fins outside of Asia according to an AWI press release.

These recent changes have been made with sharks and their relatives in mind and highlight the greater risk of extinction for these species and the urgent need for immediate action to bring about the recovery of their populations. With enforcement, one hopes it will help these predators.

Light Kills Coronavirus. Here’s How It Could Help...