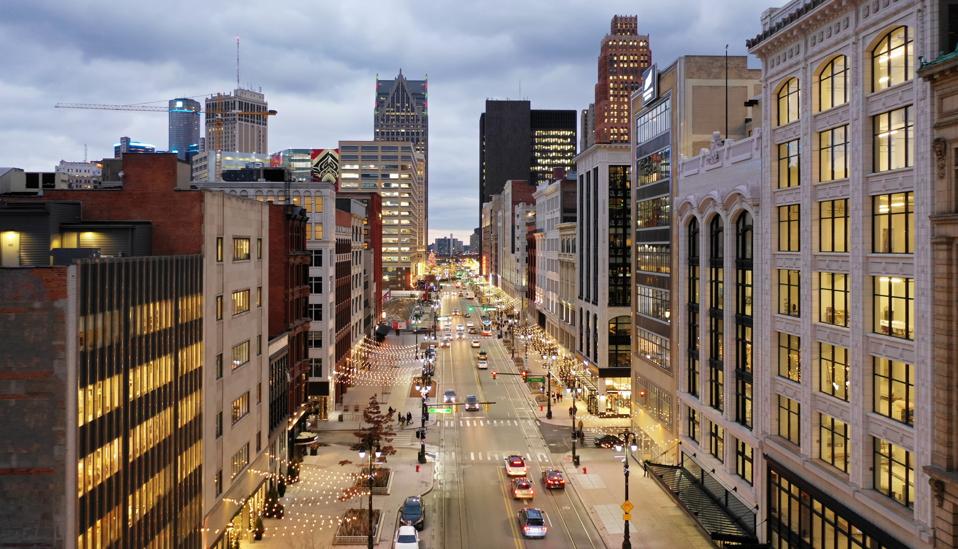 Detroit’s newly-revitalized Woodward Ave. A one-mile stretch of Woodward became the first … [+] concrete-paved road in the country in 1909.

What do the protests engulfing the country have to do with public pensions? More than you’d think.

Here’s some reporting coming out of Detroit, via the Detroit Free Press.

“Following a script seemingly set the day before, protests in downtown Detroit and in many cities nationwide began Saturday afternoon with crowds of peaceful marchers voicing chants about racial justice.

“But after dark, those crowds were less peaceful. In Detroit, Friday night’s protest had become tense and led to arrests, and it even involved a fatal shooting, although that was later determined to be unrelated to the protesting.

“Saturday night was worse. Participants threw rocks and fireworks at police, refusing to disperse until hundreds of officers converged to use tear gas and make dozens of arrests, according to reporters at the scene. . . .

“In Detroit, there’d been a turning point Saturday at dusk, witnesses said. At around 8 p.m., several black protest leaders had used bullhorns to urge a crowd gathered on Michigan Avenue at 3rd Street, estimated at more than 1,000 peaceful demonstrators, to “go home — be safe.” An hour later, as darkness fell, a din of shouting and a pounding drum echoed through downtown streets as a seemingly different group surged through Greektown, swelling rapidly by the hundreds, reporters said. . . .

“Earlier Saturday, black leaders in metro Detroit said they wanted no part of protests that, as shown by Friday night’s unrest, were more about anarchy than political change.

“National Action Network-Michigan President the Rev. Charles Williams II said that his group of racial-justice advocates was not going to be involved in any additional protests in Detroit.

“‘We made it very clear to all of our members today that we will not be participating in any unknown protest with unknown leaders or no phone numbers or identification,’ Williams said Saturday. . . .

“’You can protest in your own backyard,’ said the Rev. Wendell Anthony, president of NAACP Detroit, referring to white suburbanites who foment violence and destruction in Detroit.

“They are putting another knee on the neck of black folk because we got to live here with this pandemic still going on,’ Anthony said Saturday.”

At the same time, by sheer coincidence, the Center for Retirement Research released an updated analysis of the funding levels of the 200 public pension plans in its database. They calculate, first of all, that the funded ratios for public plans overall will drop from 71% at year-end 2019 to 69.5% at year-end 2020, then further calculate funded ratios in 2025 assuming based on two different economic scenarios: in the case of a faster recovery, they project a drop to 62.7%, and in the case of a slower recovery, a drop to 55.5%.

But some plans are projected to fare far worse. Considering the 2020 year-end projected funded status, Illinois has 6 of the worst 15. Looking at the 2025 projections shows an even worse situation: the Chicago Municipal pension, worst-of-the-worst, drops from 21% to an astoundingly-low 3.6% funded status. The largest Illinois pension, that of the Illinois teachers, drops from 40.1% to 31.9%. This is bad news — and that’s assuming that the state and city continue to make their required contributions rather than taking contribution holidays; regular readers will recall that if the city fails to do so, it faces actual insolvency, and, at the state level, even if it makes its contributions, it will nonetheless fall far short of its 90%-funding-by-2045 goal.

Now, Detroit’s not on the “worst-20” list, though its pension is still struggling, even after the benefit cuts in the course of its bankruptcy: the general pension plan for Detroit city employees was funded (pre-covid) at a 70.3% level, and the plan for police and fire employees (legacy, after the bankruptcy reform) was 72.8% funded.

But Detroit is a city that does not, cannot take anything for granted. Consider again the words of the NAACP president Anthony: “They are putting another knee on the neck of black folk because we got to live here with this pandemic still going on.” And separately, on my personal blog, I spent some time refreshing my memory on the Malice Green case — in November of 1992, after rioters caused so much destruction in Los Angeles the prior spring, city leaders as well as Green’s family themselves becoming leaders, prevailed on the city to mourn peacefully.

Yes, Detroit is still very troubled, still has a very high degree of poverty, still struggles to educate its children, and so on. But the Grand Bargain of the city’s bankruptcy, in which city and suburban leaders came together, saving such city treasures as the Detroit Institute of Art and mitigating pension cuts, was, from my vantage point, transformative. And this effort to keep protests peaceful is another indicator that the city — both elected and community leaders — knows it cannot relax its efforts.

Consider, too, that just before the coronavirus financial impacts began to be felt, on March 6, the Detroit News reported that “Mayor Mike Duggan on Friday presented ‘the tightest budget’ he has faced since taking office, with a focus on pumping more dollars into raising police officer pay, expanding animal control and making one-time infusions to boost the city’s rainy day fund and a retiree pension trust.” Having ended the prior year with a $123 million surplus, Duggan proposed boosting both the city’s rainy-day fund as well as making supplemental pension contributions. And, when faced with budget shortfalls instead, the mayor and city council acted, earlier in May, to implement cuts to keep the budget balanced.

In the meantime, in Chicago, the city’s 2020 budget had already precariously relied on wishful-thinking revenue, and the city has neither made any cuts nor provided any information on how it plans to cope with shortfalls. And the state of Illinois has refused to make any cuts — no furloughs, no pay cuts, not even the deferral of scheduled pay hikes — and just passed a budget which it deemed to meet the state constitutional requirement that it be balanced, solely by means of an assumption that the federal government will, in some manner or another, fill in any gaps.

Is it just bean-counting, to care about budgets during a pandemic? Is it too much of a stretch to say there’s a connection between the degree of destruction in a protest-riot and public pensions? Of course there’s far more to the story, but making hard choices to enable funding pension plans or kicking the can for future generations, and actively working to forestall riots or choosing to believe that insurance will cover the losses anyway — it all matters, and it’s all fundamentally a question of accepting responsibility rather than believing it can be shunted off to others or to future generations.

For Some Strange Reason, The Three Biggest Coronavirus...