Breaking
Customer Service Recovery: Six Keys To Turn Complaints...
How Becoming A Learning Organization Is Key To...
IRS Increases Enforcement On Cryptocurrency: What This Means...
Optimus Prime Finally Gets The Diaclone Update He...
No, There Isn’t A Black Hole At The...
The Fed Could Be Repeating This Key Mistake...
Japanese Lawmaker Becomes Billionaire By Selling E-Signature Services...
Communication Lessons From The Presidential Debate
4 Tips For Attracting Your First ‘Dream Client’...
Want To Generate More Sales This Holiday Season?...
Your ‘Harvest Moon’ Moment Is An Illusion: Why...
Launching A Startup Comes Down To Making A...
Google Meet’s Unlimited Calling Will Continue To Be...
The Need For Speed-Is Quantum Computing A Good...
Stock Market Crash: The End Game Approaches
Best Video Conferencing Software
Home Business Purple Sea Urchins Are Devouring California Kelp Forests, What Can Scientists Do To Stop Them?
Business

Purple Sea Urchins Are Devouring California Kelp Forests, What Can Scientists Do To Stop Them? 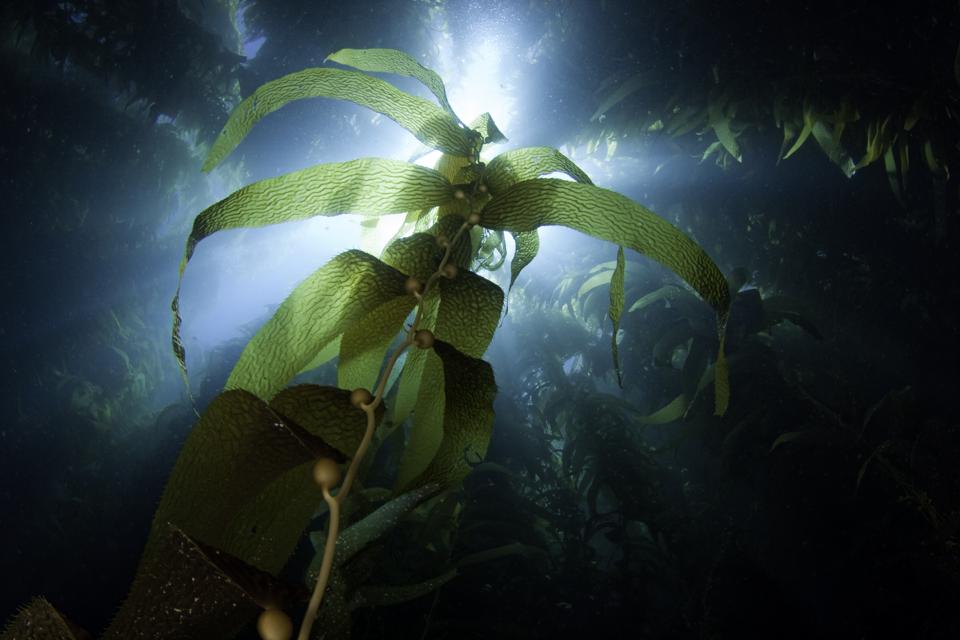 Scuba divers along the California coast have been watching the kelp forests steadily disappear for years, and everyone is pointing fingers at the purple sea urchins’ voracious appetite for the algae.

Beneath the chilly, nutrient-rich California waters, purple urchins (Strongylocentrotus purpuratus) cover the rocks like millions of cockroaches, using their platelike teeth to chip away at rocks and hunker down in the resulting crevices. Occasionally the pitiful remains of a once-majestic kelp plant, tattered and chewed, can be found with urchins covering every square inch. It won’t be there tomorrow.

As much as 90% of the bull kelp in California has disappeared, and the effects of the urchin appetite are not confined to California. These same effects have been observed in Oregon, Australia , the Aleutian Islands and Japan.

Keith Rootsaert, a California diver since 1984, is now working to understand the urchin explosion through experiments in Monterey. “In 2014 the urchins just went crazy”, he recounts, “All the fish were kinda…gone, there was just something missing”. 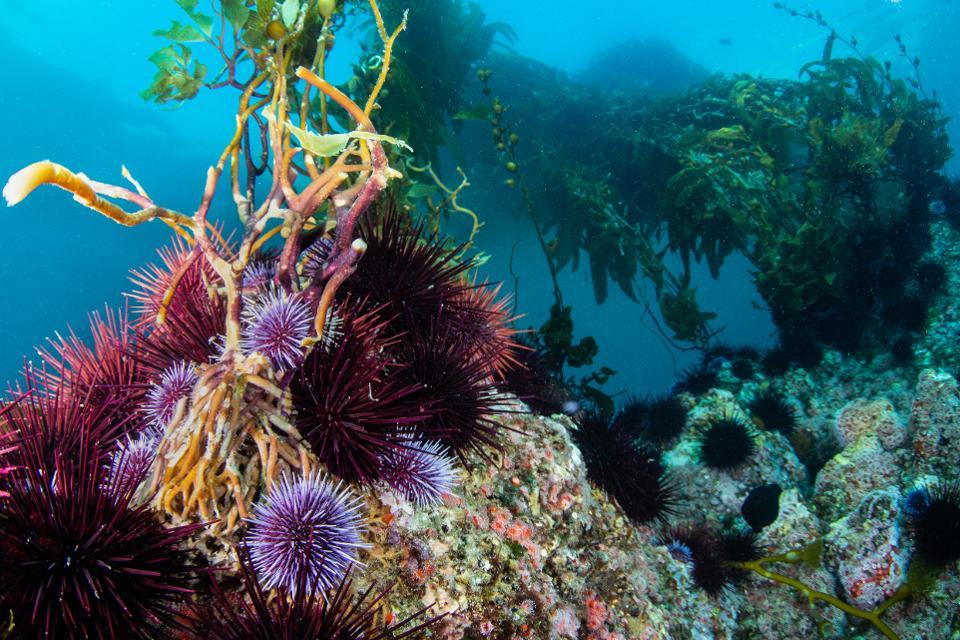 Sea lions dart past a rock with purple urchins. Urchin populations have exploded during the last … [+] decade, threatening kelp forests and commercial fisheries.

Sunflower sea stars have historically preyed on purple urchins. With an arm span reaching 1 meter across, these spiny giants kept the urchin populations at bay along the Pacific coast. However, around 2013 a marine heatwave event, named “The Blob” by scientists, threw kelp forest ecosystems out of whack. Warmer ocean temperatures led to massive die-offs of the stars.

Sea otters are another predator of urchins in the kelp forests. cracking the tough, spiky bodies on their chests, otters’ bones and teeth will turn sea urchin purple from this particular dietary choice. But otter populations have been historically depleted due to hunting and environmental stressors. Changing ocean conditions, the disappearance of sunflower stars and the precarious situation of California sea otter populations has created the perfect storm for urchin takeover.

Rootsaert’s experiments include weekly visits to the same urchin barrens, areas where urchins have eaten all the kelp, to remove urchins and determine at what point a kelp forest can re-establish itself. “In our experiments we found that we can suppress urchin density in a barren over time, and the real issue then was having successful kelp recruitment to our cleared reefs,” Rootsaert explained, “What we didn’t predict is that even when the purple urchins are gone, the red urchins are preventing kelp regrowth as well”. While removing urchins is important, the ability for new kelp to grow in their place is just as significant. Red urchins will also feed on kelp, however the increase in their population has not been nearly as explosive as that of the purple urchins.

Kelp forests are home to many commercially and ecologically important species, including abalone, red urchins, rockfish and sea otters. The disappearance of kelp and expansion of urchin barrens disrupts the delicate ecosystem balance that these species depend on. Abalone and red urchins eat macroalgae as a main food source, however, purple urchins aren’t leaving any on the plate. The recreational abalone fishery in Northern California was closed in 2018 for the first time in history due to dwindling numbers, and the red urchin fishery also collapsed.

Scientists and researchers alike are scrambling for solutions. Giant suction tubes pry urchins from the rocks during urchin removal dives on the north coast. The urchins are then turned into compost. The newest idea of urchin ranching is just starting to take shape. The novel concept of urchin ranching entails “flipping” urchin barrens back into kelp forests by removing urchins, fattening them up, and selling them for human consumption.

While efforts to turn the tide on the urchin crisis are in full swing, those who have been battling the urchin armies for some time are not entirely optimistic.

Having seen the devastating effects of urchin barrens first hand, Rootsaert understands the magnitude of the issue. “Urchin ranching could be a viable solution to this problem, if they can figure out scalability of an industry and market,” he says, “urchin populations are already so out of hand”.