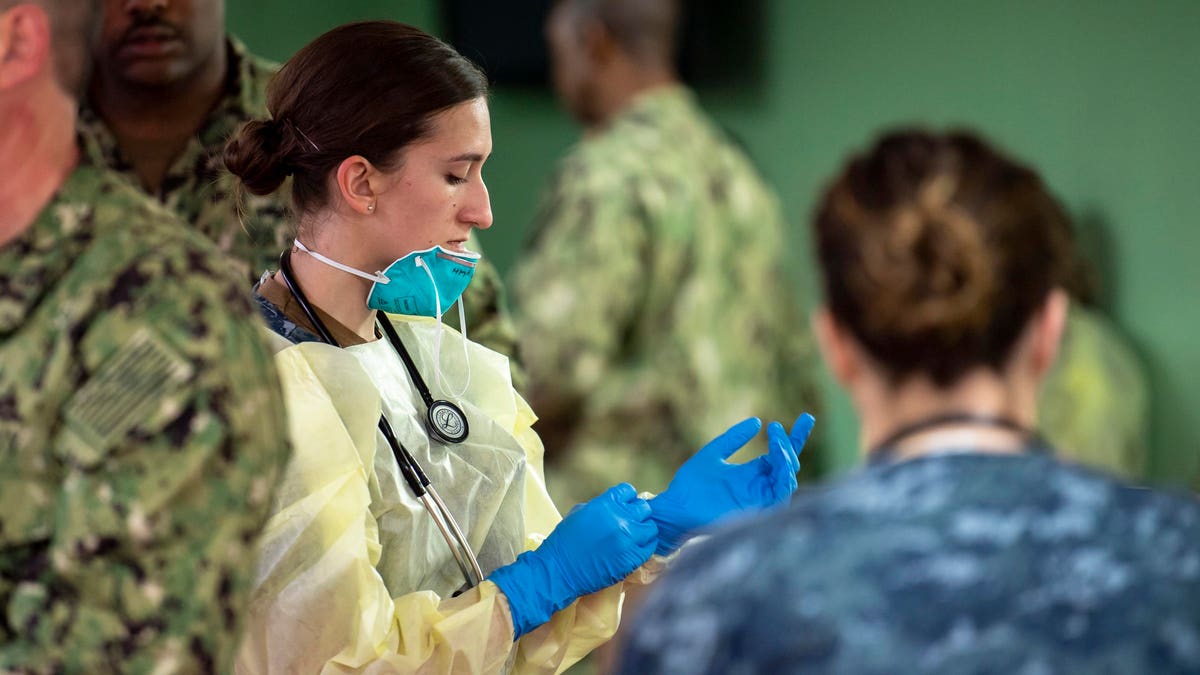 With civilian medical capabilities being stretched, many look to the military to help fill the gap. Although there are limits to what the military can do, it’s time for DOD to go on a war footing to squeeze out all the capability it can in this fight against COVID-19. Not only would this help the national fight against COVID-19, such action would also reassure a nervous population that its government was doing all it could.

However, it’s not enough to say the military needs to do more. To be helpful, experts need to get specific. Here are six recommendations that would help, even if they will not by themselves revolutionize the national response. These actions are not easy. All have risks and entail sacrifices by many.

Mobilize more of the National Guard. Currently, there are about 20,000 members of the National Guard on active duty, and that number will continue to rise. Although the federal government is paying for National Guard operations, mobilization authority and command still reside with the governors (under Title 32). There’s a lot of unused capability still there since the National Guard, Army and Air Force, totals about 440,000, and many have now become unemployed. Before calling on federal assistance, states should look first to their own military reserve component.

Unfortunately, it isn’t that easy. There is very little slack in DOD’s active-duty military health system. It is mostly sized and structured to take care of active-duty personnel, retirees, and their dependents and will need to take care of those populations. The field hospitals in New York City, which come from Fort Campbell and Fort Hood, illustrate the point. To staff these, the Army drew down medical personnel from the base hospitals, so now healthcare on these bases for remaining personnel and their dependents is limited. This system works for overseas deployments because base hospitals can backfill from reserve units and use healthcare from the civilian community, if necessary. It works poorly in a pandemic because reserve personnel are occupied in their home communities, and the civilian healthcare facilities around the base are busy taking care of civilians.

Many large bases have a deployable field hospital embedded in their medical establishment. Given the great need that is developing in major cities, it may be worthwhile to take capability out of the bases in less affected areas and send it to urban hotspots. But in doing so DOD would be increasing risk to military personnel and their dependents in order to help civilians. That bet will backfire if infection spreads to the home bases and members of the military community die because their healthcare was sent elsewhere.

Recall retirees and members of the inactive reserve. The military services have many inactive reservists in what is called the Individual Ready Reserve and retirees, some as young as 40. Participation in the current crisis by these military personnel is now voluntary, and that has yielded 17,000 responses. DOD should take the next step and involuntarily mobilize personnel with critical skills, such as in the medical field. In doing this, DOD should ensure that it is not cannibalizing civilian medical capabilities; that is, it should only recall people who are not in medical jobs. Who might these people be? An Army medic who got out two years ago and is now a college student, a nurse who got out and is now in business school, a retired doctor who is enjoying life on the golf course. Recalling these people will involve disrupting their lives, perhaps severely, but that’s where we are.

Keep personnel with critical skills on active duty. DOD calls this “stop-loss.” It means that, when a servicemembers finish their term of service, they are not allowed to leave but are retained for the duration of the emergency. President Trump has already signed the order that allows this to be done. Stop-loss would increase the number of medical personnel available but again at great sacrifice to people who had made plans for their post-military lives. There is also a political risk. Use of this authority became controversial during the 2000s when it was criticized as a “back door draft” and might be controversial again.

Call up reservists with key skills but who are currently in non-medical civilian jobs. The problem with mobilizing entire reserve hospitals is that they take medical personnel out of one civilian community in order to deploy them to a different community. Instead, DOD might call up only reserve personnel who have key skills, particularly in medical fields, but who do not work in the that field in their civilian lives. Who might such people be? It is the stay-at-home mom who is a reserve nurse (as my wife was once), the reserve pharmacist who is now a pharmaceutical salesperson, the reserve doctor who works for a biomedical startup. Again, there are costs. In addition to disrupting personal lives, this fragments reserve units as elements of their personnel get pulled out. If the reserve unit is ever activated, it will have to fill many holes, and this causes delays. In 2005, during the height of the wars in Iraq and Afghanistan, the head of the Army reserve complained bitterly about the practice of pulling out individuals, saying it was breaking the reserves.

Call the private military contractors. This is a bit tongue-in-cheek but gets at an important point: DOD and the government need to expand the pool of personnel with key skills, particularly medical skills. Private military contractors are very good at finding people with specialized qualifications in environments where skills and rapidity matter a lot and cost not so much. Although infamous for providing armed security personnel, the vast majority of capabilities that these contractors provided were in support roles like intelligence, logistics, translation, base services, and even medical. The military has relationships with many companies that provide personnel and services for overseas operations. It even has a contract mechanism, LOGCAP, for this purpose. Now it’s time to use those relationships to get personnel for domestic needs. As with mobilizing reserve personnel, this would have to be done carefully, so the effort does not cannibalize existing capabilities but should, instead, focus on people with key skills who are no longer active in the workforce: students, stay-at-home parents, retirees. Now is the time to bring those people back into service.

Use the defense production act aggressively but responsibly. Much has been written about the Defense Production Act, and the administration has begun using it to increase production of medical supplies, for example, inducing General Motors and Ventec to produce more ventilators and facilitating supplies for other companies making ventilators. These efforts should continue.

One insight arose from a research project that CSIS is conducting on industrial mobilization. The government used similar authorities in World War II but found that companies did not wholeheartedly increase production unless the government guaranteed that all output would be purchased. The same applies today. If the government wants more ventilators, it should guarantee that it will buy all the ventilators that manufacturers can produce and not leave them dangling at the end of the crisis. That way, manufacturers won’t hedge against a decline in demand when the crisis winds down, as it inevitably will.

The DPA has enjoyed bipartisan support. If its use becomes partisan, then the authority will be restricted and a valuable tool in national emergencies lost.

A limited but important role. The military is not the nation’s first line of defense against pandemics; it is the third line behind local authorities and domestic agencies like the CDC and FEMA. Nevertheless, it has an important role to play. Taking its campaign to the next level will help civil authorities on the front lines of the fight against the virus and reassure the public that its government is doing everything it can to protect them. All the actions described here will disrupt lives. Some will serve to move risk around, not reduce it. However, in the current crisis, there may be no choice.

Prediction For 2030: Government Can Help Housing By...

When Asset Mismanagement Puts Pensions At Risk: The...

Let’s Get Together: Ten Tips For Planning A...

The Devil Wears Prada Musical Has Found Its...