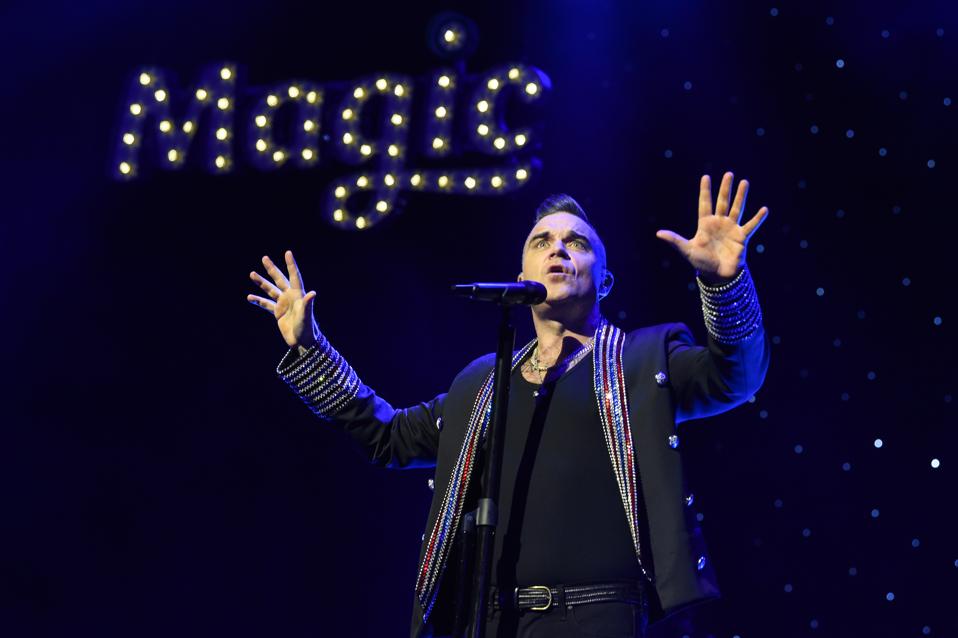 While Queen proves how popular they remain in their home country (yet again, as if anybody was questioning it at this point), some of the highest-ranking debuts on the albums chart this time around show how diverse musical taste is in the United Kingdom, and that almost anybody can be warmly accepted as an artist…as long as the product is good.

Here are five titles that make waves on this week’s U.K. albums chart.

No. 2 – Robbie Williams – The Christmas Present

The past tracking frame featured a tough battle between pop-rock favorites Coldplay and pop icon Robbie Williams, and in the end, the former won the week. While he may have been forced to settle for second place (which was not his plan), Williams keeps an impressive winning streak going, as none of his solo efforts have ever peaked outside the top two.

Having said that, The Christmas Present, Williams’ first holiday release, is his first title to fail to reach the throne this decade.

After showing off his vocal prowess on the Beauty and the Beast soundtrack (the recent live action remake, not the original animated classic), actor Luke Evans clearly decided to invest further in his musical career. The multi-talented figure debuts his first full-length At Last at No. 11 in the U.K., missing the highest spot on the tally by just one spot.

The legendary rock band’s Greatest Hits reenters the race at No. 24 this week, a lofty position for a title that has already been present on the chart for well over 850 frames. That makes the set one of the longest-charting efforts in British history.

Perhaps even more impressive than that is the fact that Greatest Hits is not Queen’s only compilation on the ranking this time around. The group’s The Platinum Collection returns to the top 40 this week, settling at No. 37 as it passes 270 turns on the list.

As the hip-hop musician scores his first No. 1 on the albums chart in the U.S., he collects a fourth top 40 in the U.K., which is still an impressive sum for someone who only first made it to the tally at all last year. A Love Letter to You 4 launches at No. 32, which is actually the lowest peak of any Redd project, but only by one rung (A Love Letter to You 3 rose as high as No. 31).

Alternative powerhouse Beck scores his ninth top 40 album with Hyperspace, which opens at No. 33 this frame. Somewhat surprisingly, the title disappoints, as the musician’s three previous full-lengths, everything he’s shared for over a decade, have all risen into the top 10. Beck’s 2017 drop Colors peaked at No. 5, so a No. 33 start is unexpected.

Did Facebook Just Accidentally Give 2.4B Users A Great Reason To Quit?

4 Expert Strategies For Engaging Your Child In...