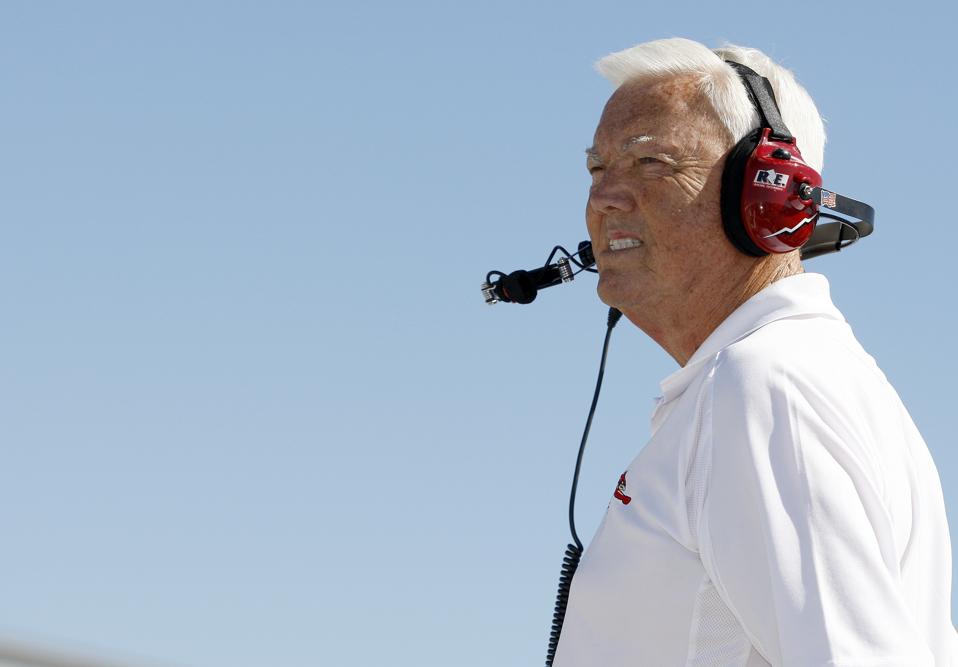 Junior Johnson, the NASCAR legend who was never called by his actual name, Robert Glenn Johnson Jr., died Friday at the age of 88. This is how big Junior Johnson was: He was in the first class of the NASCAR Hall of Fame in 2010, along with series founder Bill France; his son, Bill Jr., and seven-time champions Richard Petty and Dale Earnhardt Sr. Just those five.

And even that somehow does not even come close to doing Junior Johnson justice. He was a colossus, a big kid from the North Carolina foothills who ran his daddy’s moonshine liquor past revenue agents — spending a year in prison for having been caught with an illegal still — before becoming a successful stock-car driver, owner and businessman.

He was such a romantic figure as a driver in the 1950’s and 1960’s that he fueled national interest in NASCAR, which was then largely just a Southern sport. In an infamous 1965 piece for Esquire magazine headlined, “The Last American Hero Is Junior Johnson. Yes!” the late author Tom Wolfe went to North Carolina to describe Johnson and all the fuss around him.

“He pulls up and as he gets out he seems to get more and more huge,” Wolfe wrote. “First his crew-cut head and then a big jaw and then a bigger neck and then a huge torso, like a wrestler’s, all done up and rather modish and California modern, with a red-and-white candy-striped sport shirt, white ducks and loafers.

“ `How you doing?’ says Junior Johnson, shaking hands, and then he says, `Hot enough for ye-uns?’ “

Johnson won 50 races at NASCAR’s top level between 1953 and 1966, and his drivers won 132 races and six championships in his race cars (three by Cale Yarborough, three by Darrell Waltrip) — but statistics don’t really do a good job of measuring his impact on the sport. Junior Johnson, who retired as an owner in 1995, steered stock-car racing into its big future.

The Wolfe piece in Esquire was turned into a 1973 film, “The Last American Hero,” with Jeff Bridges starring as a fictionalized version of Junior Johnson. Wolfe’s piece was later included in the 1999 anthology “The Best American Sports Writing of the Century,” cementing Johnson’s place on the Mount Rushmore of NASCAR, in my view. (Junior, The King, The Intimidator and Big Bill France.) 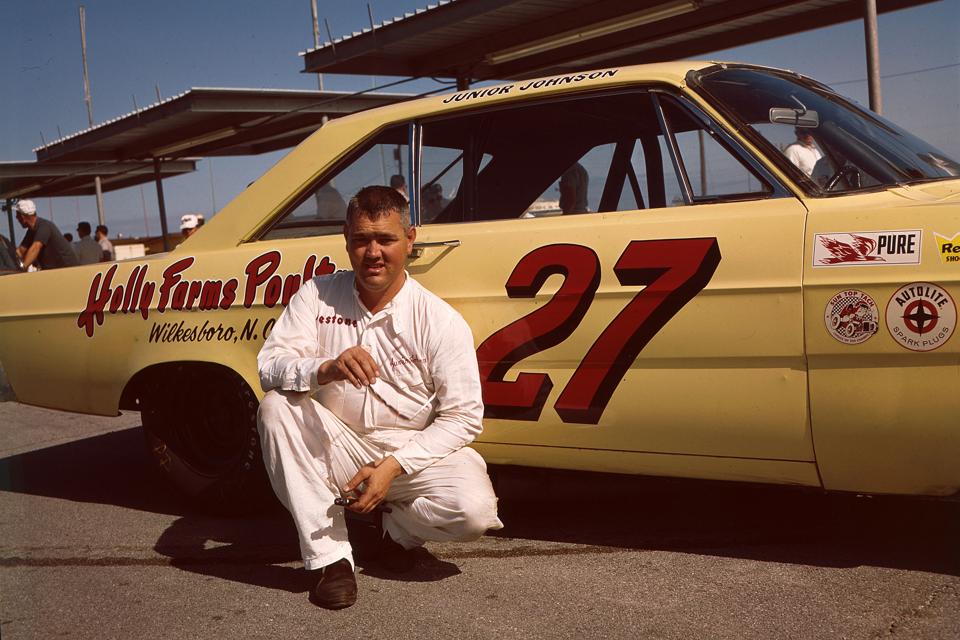 1965: Junior Johnson poses with his Ford during his final full season as a driver on the NASCAR Cup … [+] circuit. Johnson started 36 of the 55 Cup races during the year and won 13 of them. Bobby Isaac drove for Johnson in 1966. (Photo by ISC Images & Archives via Getty Images)

He invited my sportswriting friends out to his farm to hunt raccoons: “Don’t shoot ‘em,” Junior told Wolfe. “The dogs tree ‘em, then you flush them out, and the dogs fight ‘em.” But I did get to talk to Junior a couple of times when he was a car owner, and he was polite, genteel and quotable, and he gave me all the time I wanted.

In 1991, he’d hired a winless, 34-year-old journeyman from Tennessee named Sterling Marlin to drive one of his Ford Thunderbirds, and in his sixth race for Johnson, Marlin got into a fiery wreck at a race at Bristol, Tenn., suffering second-degree burns on his shoulder, hands and inner thighs. Marlin won a pole position three months later.

In the garages at Pocono Raceway in Pennsylvania, I ran into Johnson, whom I described as a “white-haired racing mogul,” and asked him about Marlin. Johnson spoke quickly, in a clipped Carolina drawl that a Yankee like me could barely understand, let alone keep up with.

“Normally, a driver says, `It’s too much trouble to give to get back in the car. I’m burned, and I’m hurting pretty bad,’ “ Johnson told me over the engines that day. “But he got back in and did what he could. That’s what you’ve got to have as a young driver.”

Marlin won a Winston Cup race three years later, and 10 overall. None were for Junior Johnson, but he was grateful to Johnson for giving him a big shot. “You couldn’t ask for anybody any better,” Marlin told me.

President Reagan granted Johnson a pardon in 1986 for his moonshine conviction. After he walked away as a car owner — he was only 64 — he retired to his farm near Wilkesboro, N.C., and sold country ham and “Midnight Moon,” legal moonshine made according to the family recipe.

More than a half-century has passed since Junior Johnson stormed around race tracks as a driver, winning all of $301,866, and a quarter-century since his presence was felt in the garages. Since he left, NASCAR has seen a remarkable surge, then a decline in interest.

But NASCAR never would have traveled as far as it did without the irrepressible Junior Johnson, now gone, but immortal. He told Wolfe of being in prison, “I don’t want to pull any more time, but I wouldn’t take anything in the world for the experience I had in prison. If a man needed to change, that was the place to change.”

Why NASCAR Phenom Hailie Deegan Is Jumping Into A Ford

NASCAR’s Most Important Hire in 2020

An Old NASCAR Tradition Runs Out Of Gas 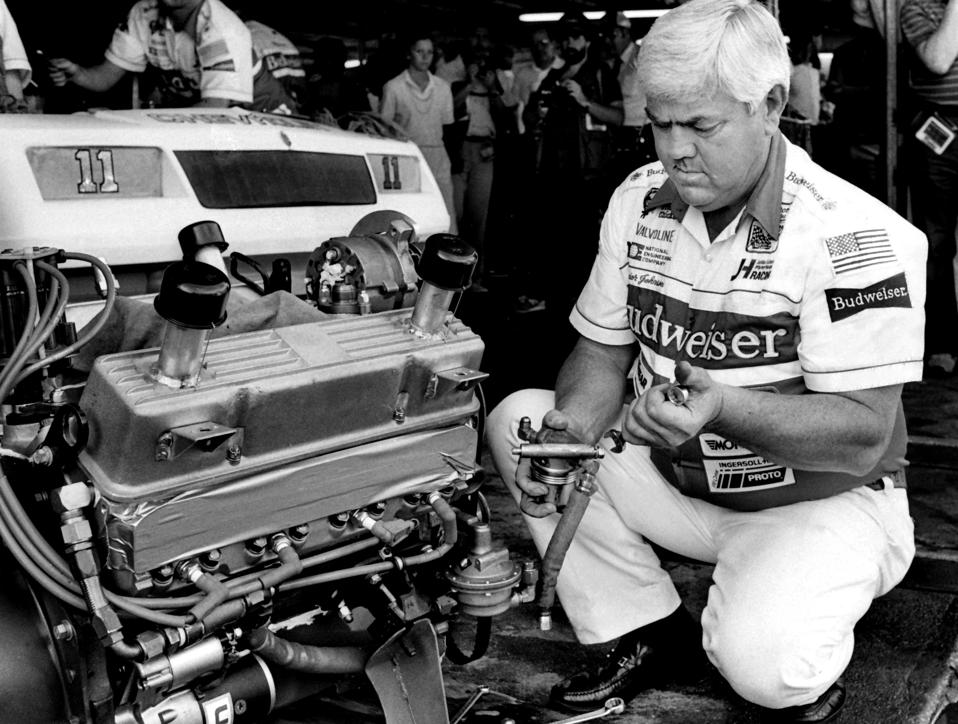 DAYTONA BEACH, FLORIDA – FEBRUARY 1985: Veteran NASCAR driver and car owner Junior Johnson works on … [+] an engine in the speedway garage prior to the running of the 1985 Daytona 500 stock car race at Daytona International Speedway in Daytona Beach, Florida. (Photo by Robert Alexander/Getty Images)