Rabobank’s ‘Beverages In The Time Of Covid-19’ Report 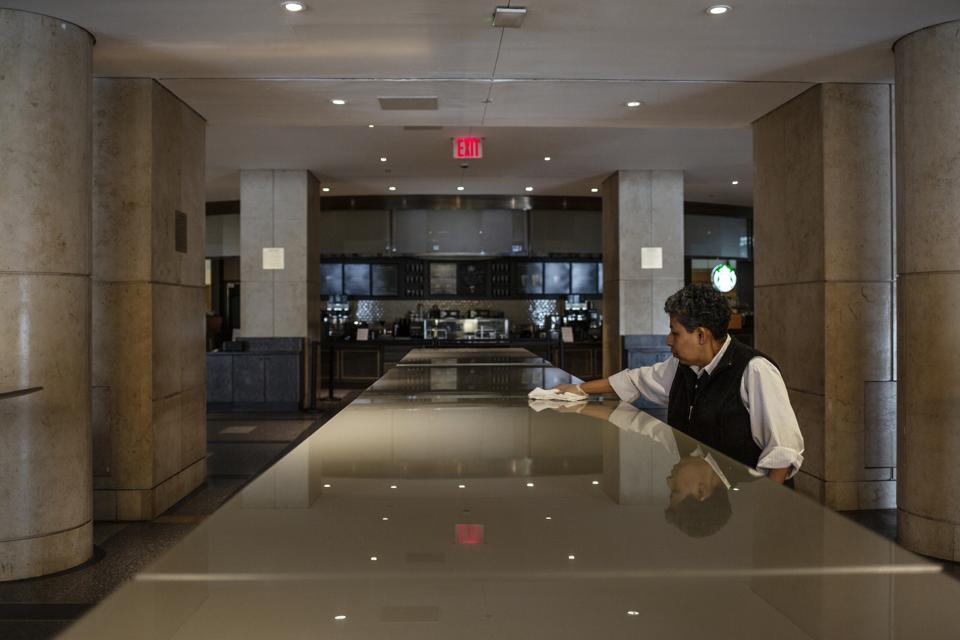 NEW YORK, NY – MARCH 18: A worker cleans a table in front of a Starbucks at Rockefeller Center as it … [+] sits closed in the wake of the Coronavirus, COVID19, outbreak on March 18, 2020 in New York City. Businesses continued to close days after bars and restaurants shuttered as authorities in New York weighed a “shelter-in-place” order for the entire city. (Photo by Victor J. Blue/Getty Images)

According to the Rabobank ‘Beverages in the Time of Covid-19’ report: “The first cases of coronavirus in the US were recorded in January 2020, but the dramatic changes in consumer behavior did not begin until March.”

With the caveat: “We understand things are changing rapidly, but this is how we see impacts to the beverage industry right now,” Rabobank’s report states the current situation obviously has a “…profound impact on current operations, but is also likely to have long-term consequences.”

According to the report, off-premise sales are growing significantly “…e-commerce channels are doing particularly well,” and consumers seek larger formats and lower-priced products “…at the expense of high-end premium/luxury brands.”

As for on-premise, “Some states and districts (NY, MD, DC, et al.) are waiving restrictions and allowing bars and restaurants to deliver alcohol, though this will likely have little impact.” That’s because on-premise accounts for about $10 billion in beverage alcohol sales monthly. The loss of on-premise consumption occasions like St. Patrick’s Day and March Madness will hit hard. Rabobank predicts a ban on dining and bars for two months would produce about $15 b (or more) in lost alcohol sales—categories like tequila, which thrive in an on-premise environment, “…may feel the impact disproportionately.” Imagine what would happen if the ban lasts more than two months!

This crisis appears to provide e-commerce with a decided nudge. According to the report, e-commerce is already “…exploding across the industry.” NakedWines  paused its new order taking to ensure existing customers don’t get shorted, and Drizly reported a 500% increase in sales from new customers in just two weeks—repeat customer sales are up 125%. Finally, Wine.com saw sales triple the weekend of March 14-15. Be warned that if you go to these buying sites, traffic may be heavy and your progress may be slow.

During the first two weekends in March US winery tasting room sales had dropped by 40% from February sales—it will get worse now that many states have closed on-premise sales. And according to Rabobank, by the week ending March 20, Direct-to-Consumer (DtC) winery sales had not registered an increase.

Small and independent craft brewers will be hurt badly, according to the report: “A survey from The Brewers Association shows its median member expects a 60% volume decline (NOT a volume-weighted average) in March, and only 10% of respondents think they will avoid layoffs…Unlike wine, beer does not have the option for out-of-state DtC shipping.” (This includes craft distillers).

With many states shutting down all but essential businesses, the Rabobank report wondered what that means, citing “…Pennsylvania has shut down all state-run liquor stores. Alabama has shut down a third of their own. Many states do not allow spirits sales in grocery stores.” The hint is that because beer is more available in grocery stores, beer companies may fare better than wine and spirit companies during this crisis. According to Rabobank, with some states waiving rules restricting on-premise alcohol sales for off-premise consumption, “…alcohol trade organizations should push to ensure these laws become permanent,” saying, “Craft brewers/distillers, coffee shops, and restaurants are lobbying to ensure they are included in any stimulus package.”

The report clams these activities have taken place already: many US wineries have beefed up outreach to consumers; companies have drawn down revolving loans to preserve cash flow; companies heavily promote at-home consumption occasions; and efforts are made to avoid supply chain disruptions as production or warehouse functions are shut down.

The questions concerning Rabobank now are: will the crisis lead to recession, and if so, how deep or how long-lasting?; how will a declined stock market affect spending by retirees?; will the crisis disrupt the long-term trend of up-selling?; and, if there is a recovery, how weak or how strong will it be?

Federal Student Loan Borrowers Are Getting Some Relief During Coronavirus Crisis

Apple To Release The Cheapest MacBook Ever…And Other...

How To Run A Business With Your Romantic...

What New Jersey Devils Are Facing After Firing...

A Chaplain And Medical Anthropologist Explain How You...