Breaking
ESBC Major Updates: Tons Of Heavyweight Greats Added...
5 On-Demand Courses To Help Develop Your Leadership...
How to Run Nonprofit Marketing Ads
Entrepreneurs Are Bringing Transparency To Home Buying And...
Best Incentive To Get Vaccinated: Money, Messaging, Or...
Page Level Query Analysis at Scale with Google...
How A CIO Can Align IT With Business...
Blogger of the Month: Jo, Girl Eats World
6 Things Women In Business Know That Men...
How to Use First-Party Data for Ad Personalization
Pressing Reset—Putting A Fallen Unicorn Back On Its...
How We Went Viral: Promoting Content with Influencers,...
Blame Olympic Record Price Tag For Return To...
Apple iOS 14.5 Release: Should You Upgrade?
How to Come up with Podcast Topics and...
Why Gaming Gear Company Razer Launched A $50...
Home Business Ramos Insults Odegaard’s Mother, Could Halt Norwegian’s Return To Real Madrid
Business 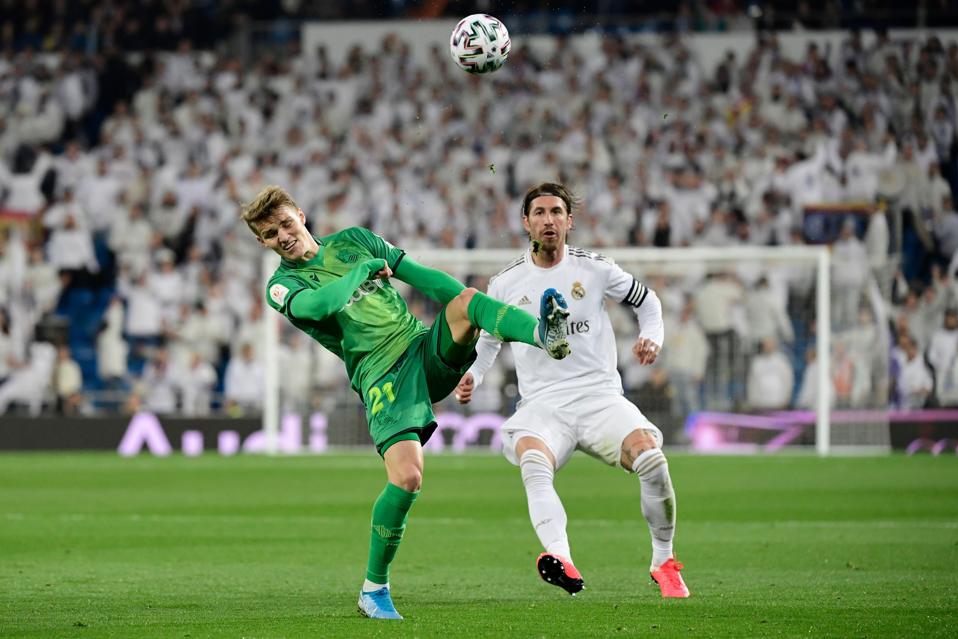 All season long, Real Sociedad have had a shining light in their mightily impressive outfit; Real Madrid loanee, Martin Odegaard.

It’s taken a few years for the youngster to finally establish himself, having been loaned to Heerenveen and Vitesse before settling in San Sebastian.

There’s no question that 2019/20 has been his breakout season, and one in which all of his early promise is being fulfilled.

Florentino Perez and Zinedine Zidane surely knew that he would be the thorn in Real Madrid’s side when Los Blancos were paired with Real Sociedad in the Copa del Rey, but with no ‘fear clause’ in place, the 21-year-old was able to play.

For those who are not aware, Spanish clubs insert ‘fear clauses’ as a general rule of thumb in loan contracts in order to stop loanees playing against their parent club.

Odegaard looked completely at home at the Santiago Bernabeu on Thursday night, and even if his opening goal for La Real was a little fortuitous, he surely deserved such luck given the way in which he approached the game.

It would’ve been far easier for him to go into his shell, overawed by the ‘big occasion’ and the opportunity of showcasing the talent he’s always had but has only recently learned how to use it to its fullest effect.

Far from hiding, Odegaard positively lapped up the responsibility as he and his team-mates ran rings around a lethargic and much-changed Los Blancos.

Zidane has to take much of the blame for the hosts eventually going out of the competition because the Frenchman surely knew the threat that their visitors possessed before the match.

That Real Madrid managed to score three certainly skewed the score line somewhat because Sociedad were much better than the 3-4 scoreline suggests.

During the game there were the usual mix of petty fouls and unsavoury incidents, but one stood out more than most.

Though not sent off on the night, Real captain, Sergio Ramos, can’t seem to help himself when it comes to controversy.

Professionals love his desire and energy, and the way in which he often drags his team along with him is something to marvel at.

However, once you get under Ramos’ skin, he’s easily rattled and that’s exactly what we saw when Odegaard got the better of him in a tackle.

“Odegaard! I sh*t on your wh**re mother,” he shouted at a player that is destined to become his team-mate in due course. Such vile and personal abuse might well dictate otherwise.

Even Ramos’ demand for the youngster to apologise was met with short shrift.

All’s fair in love and football, they say. What goes on, on the pitch, stays on the pitch. It’s a man’s game and all that.

But insulting one’s mother in such a manner is taking the machismo just a little bit too far.

Odegaard had the last laugh of course, because it’s his side that are in the hat for the Copa del Rey semifinals and not Real Madrid.

Is Apple At Its Core A Media Company? Watch Tonight’s New Hampshire Debate