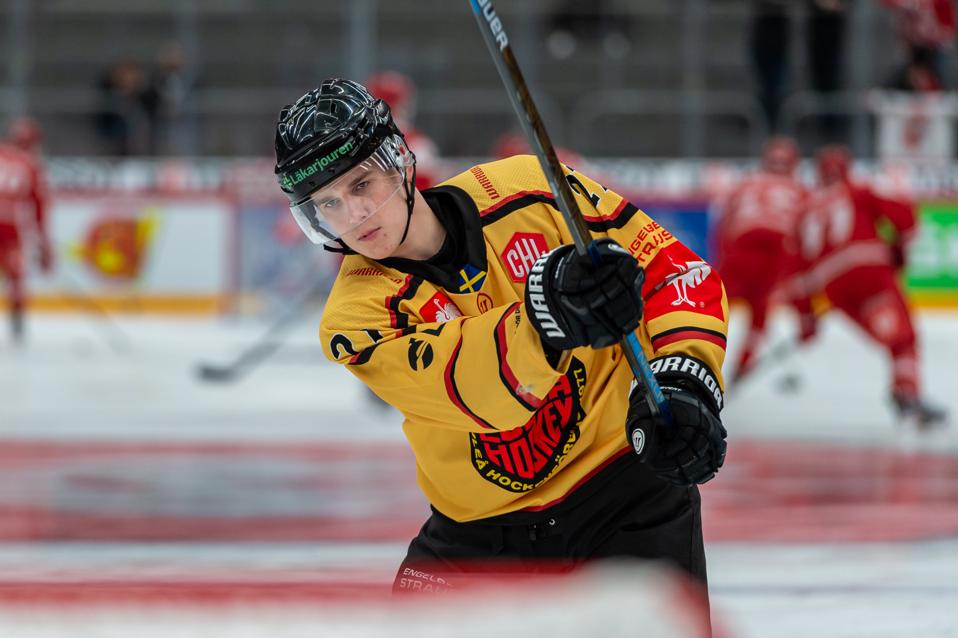 Imagine how ironic it would be if the future of the Rangers rested on another guy named Lundqvist. Maybe that’s a bit overdramatic, and it’s spelled with a K instead of a Q, but the team does have an elite prospect in Swedish defenseman Nils Lundkvist.

The Rangers drafted Lundkvist 28th overall in 2018, and his stock has steadily improved ever since. In 45 games with Luleå HF of the Swedish Hockey League this season, the 19-year-old has more than tripled his point total from a year ago (31) while averaging 20-plus minutes per game. Lundkvist also had an impressive showing at the most recent World Junior Championships, registering eight points in seven contests. His dynamic play, offensive prowess and speed earned him the third-best ranking among Rangers prospects, according to The Hockey News’ recent Future Watch issue.

“Since the draft, he keeps proving us right about his selection,” said Jan Gajdosik, the Rangers’ longest-tenured European scout, according to LoHud.com’s Vince Mercogliano.

And now, with the SHL’s postseason canceled due to the COVID-19 pandemic, Lundkvist has a decision to make. Fellow Rangers prospect and 2018 draftee K’Andre Miller just signed his entry-level contract and turned pro. Is it time for Lundkvist to do the same?

Based on his raw talent alone, Lundkvist should give it a hard look. But the Swedish prospect has another thing working in his favor. He’s a right-shot defenseman, which is a commodity in today’s NHL.

It’s strange to overvalue righties. Nine out of 10 people in the world are right-handed. If anything, lefties should be more in demand, as they are in baseball.

But as Seth Rorabaugh of TribLive.com noted last year, “Then there’s hockey, which goes completely against the grain.”

“We prefer to have guys on their strong sides as defensemen,” Penguins coach Mike Sullivan said to TribLive.com. “It helps going back for pucks. You’re always on your forehand. You have the ability to change the point of attack on your forehand, make that (defense-to-defense) pass. It puts guys in more advantageous positions. That’s not to say that some guys can’t play the off side. But I think it’s obvious that our preference is to keep them on their strong sides.” 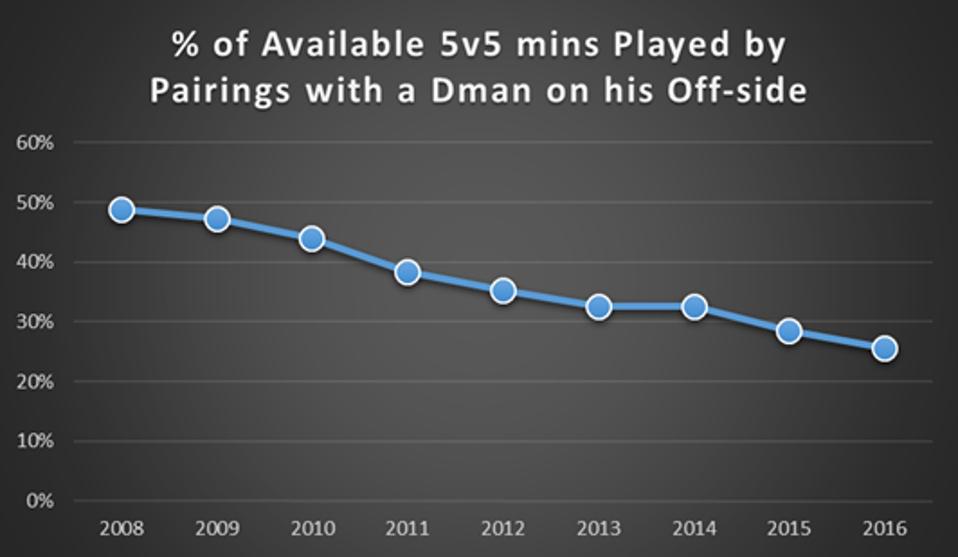 Percent of available minutes played by pairings with a defenseman on his offside — courtesy of … [+] HockeyGraphs.com.

There’s a natural inclination to create defensive pairings balancing right and left-handers. According to Hockey-Graphs.com, the percentage of ice time played by pairings consisting of a defenseman playing on the opposite side fell steadily from 2008 to 2016. The innate orientation of the position makes it tougher for a blueliner to play on their off side.

The problem is every team can’t avoid these constraints. Of the 303 defensemen to participate in at least one game during the 2019-20 season, 60 percent are lefties. So, there aren’t enough righties to go around.

As Sullivan says, a defenseman can learn to play on the opposite side. But according to New York Islanders coach Barry Trotz, it’s trickier to find a player with the necessary skill set.

“It’s a huge luxury,” Trotz said to TribLive.com. “When you get a lefty and lefty [on defense], it takes a unique player, a guy like [former Penguins defenseman] Sergei Gonchar, who could do that a little bit. You lose about a third of your ice when you play your off-hand. Just offensively, you lose a third of the ice.”

And because teams want to avoid the issues created by unbalanced pairings, playing the right side has become extremely profitable. Seven of the 11 highest-paid defensemen in the NHL, based on average annual value, are right-handed defensemen. 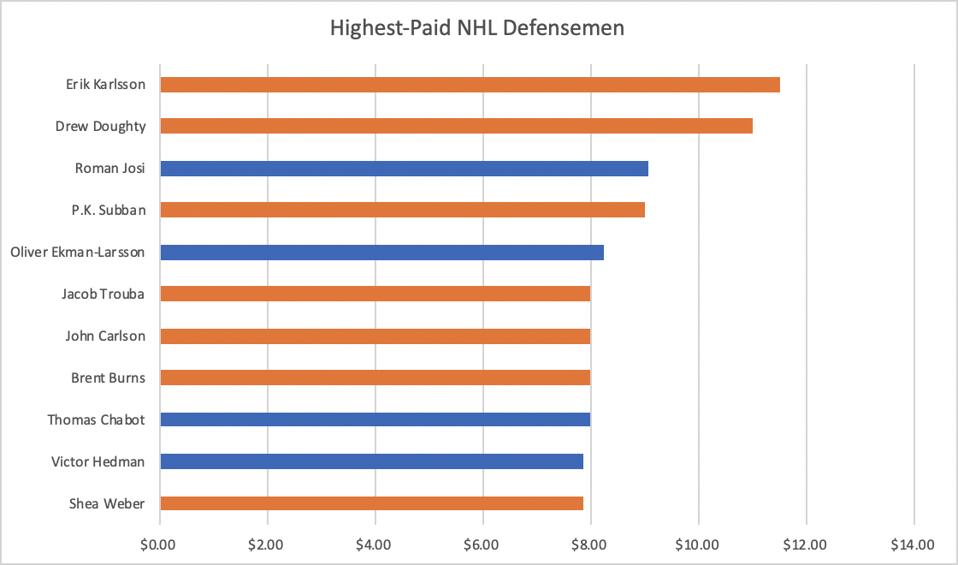 “Supply and demand, I guess,” Flyers right-handed defenseman Matt Niskanen, who signed a $40.25 million deal in 2014, told Triblive.com. “I don’t necessarily fall into this category, but highly skilled right-shot defensemen really work well [on the power play] because a lot of [passers] are lefties.”

Lundkvist fits that mold exceptionally well. His ability to move the puck well and make quick decisions already allow him to succeed in power-play situations. And Lundkvist’s ability to score the puck – five of his 11 goals in 2019-20 came on the man advantage, according to QuantHockey.com – doesn’t hurt either. His skill set profiles similar to Boston’s Charlie McAvoy, and McAvoy’s recent three-year, $14.7 million extension could be what the Rangers have to pay up after Lundkvist’s entry-level contract expires.

Whether Lundkvist reaches his potential remains to be seen. The biggest knock against him is his size. His 5-foot-11, 174-pound frame is less than ideal, according to The Athletic. Plus, the Rangers’ pairings are already balanced at the NHL level with Tony DeAngelo, Jacob Trouba and Adam Fox on the right side.

Still, Lundkvist’s speed grades well enough to cover any defensive shortcomings. And even though the Rangers had an even split in 2019-20, the number of left-handed defensemen in the organization (10) dwarfs the right-handed ones (5), according to CapFriendly.com.

If Lundkvist does decide to turn pro next season, he has a bright and possibly lucrative future ahead of him.

“I am sure he will be pushing hard for the spot in the New York Rangers’ lineup in the next season,” Gajdosik said, according to LoHud.com. “He is ready to fight for the spot with the big team.”

5 Ways to Create a Culture of Care...