Breaking
ESBC Major Updates: Tons Of Heavyweight Greats Added...
5 On-Demand Courses To Help Develop Your Leadership...
How to Run Nonprofit Marketing Ads
Entrepreneurs Are Bringing Transparency To Home Buying And...
Best Incentive To Get Vaccinated: Money, Messaging, Or...
Page Level Query Analysis at Scale with Google...
How A CIO Can Align IT With Business...
Blogger of the Month: Jo, Girl Eats World
6 Things Women In Business Know That Men...
How to Use First-Party Data for Ad Personalization
Pressing Reset—Putting A Fallen Unicorn Back On Its...
How We Went Viral: Promoting Content with Influencers,...
Blame Olympic Record Price Tag For Return To...
Apple iOS 14.5 Release: Should You Upgrade?
How to Come up with Podcast Topics and...
Why Gaming Gear Company Razer Launched A $50...
Home Technology Razer Ornata V2 Brings Impressive Upgrades To Their Hybrid Keyboard
Technology 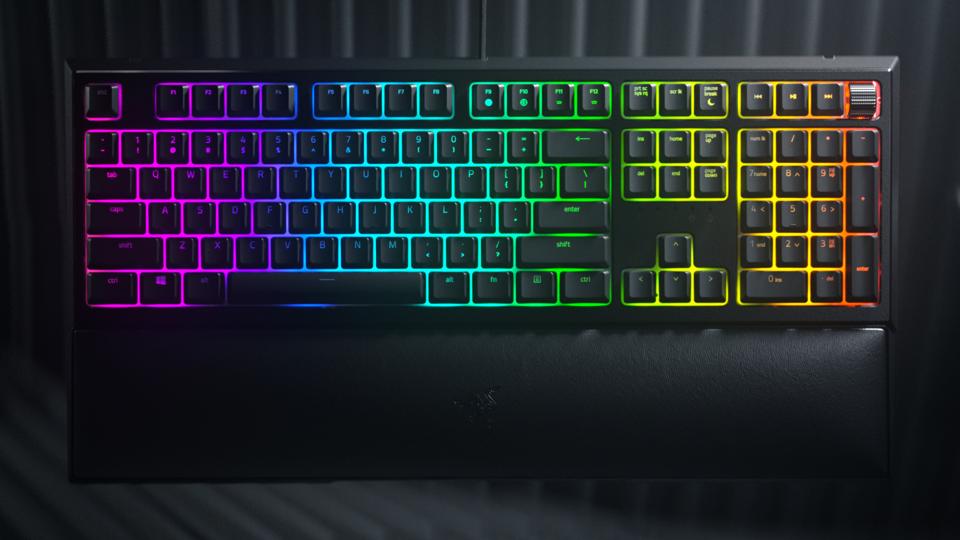 Razer is back with the next generation of their mecha-membrane keyboards. These combine mechanical responsiveness with the comfortable typing profile of a membrane keyboard. The Razer Ornata V2 is a great example of what can be done when you look at two seemingly competitive technologies and say “Why not both?”

The Razer Ornata V2 is the second version of the company’s hybrid mecha-membrane keyboard. It’s a full-sized keyboard with dedicated media controls and digital scroll wheel (new for this version).

Mecha-membrane keys aren’t here to defend your town against rampaging kaiju, but instead are a mix of mechanical switches and rubber-dome membrane switches. 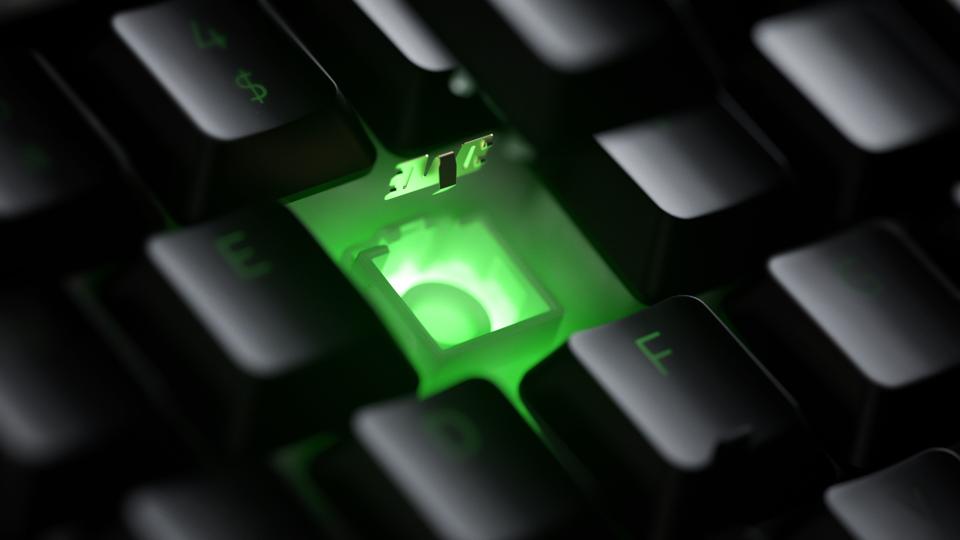 Popping off the keys, you can see that it’s a bit of a bait-and…ahem…switch. The sound that you’d usually get from a key activating a metal spring in a traditional mechanical keyboard is replaced here by a metal plate seated in the back of the switch. It doesn’t actually activate anything and is only there to give you a pleasant “click” with each key press. All the actuation of the key is handled by the rubber dome membrane switch that sits underneath.

That said, the low-profile keys are pleasant to type on and the membrane switches themselves are perfectly serviceable. Just don’t go looking to adjust their actuation or sensitivity. Like most membrane keyboards, those values aren’t adjustable.

I am surprised, though, that Razer didn’t use their new keycap process, something so important to them a minor printing error delayed the launch of the Huntsman Tournament Edition, to create low-profile keys for the Ornata V2. The standard keycaps aren’t bad, but they’re your standard glossy plastic and will undoubtedly take on a shiny patina with use, as happens with most keyboards. 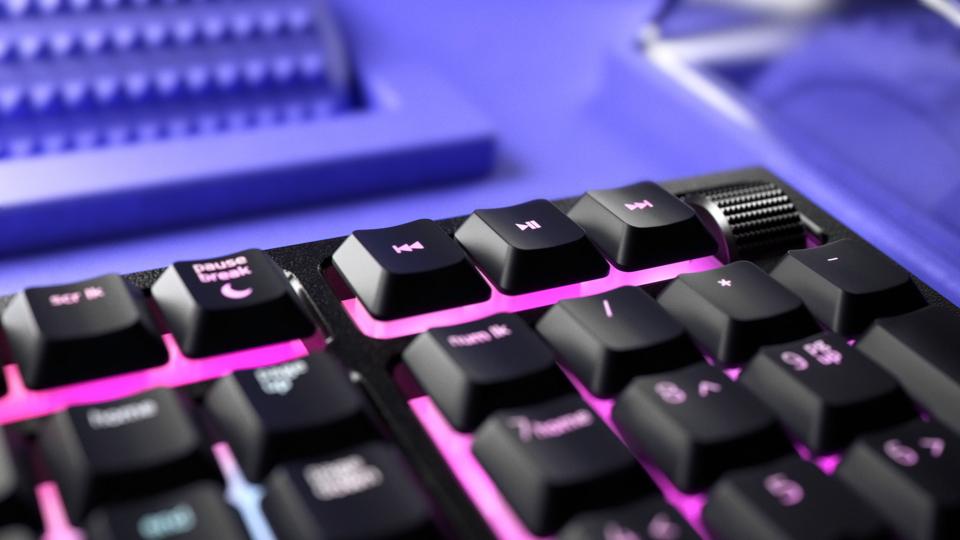 The biggest upgrades over the previous Ornata are the dedicated media keys and the digital scroll wheel. I appreciate that the media keys are full-sized keys, instead of the recessed rubber chiclets that seem to adorn most keyboards. The scroll wheel is perfectly pleasant to use as well. It provides tactile feedback with each turn and can be clicked to quickly mute your computer.

The cable routing has been improved as well, now exiting out the top of the keyboard instead of on the side. Much nicer for anyone who’s obsessive about their desktop organization. 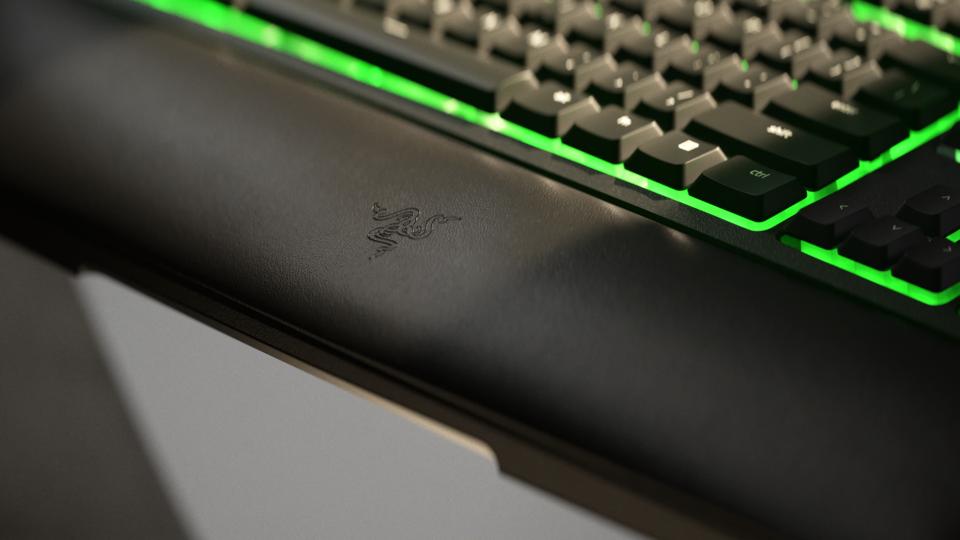 The Ornata V2 still comes with one of the best wrist rests I’ve encountered in the industry. The plush leatherette cushion makes all-day-typing completely comfortable. It clicks on to the bottom of the keyboard magnetically, so it’s easy to remove as well.

The one annoying thing about the Ornata V2? Total lack of software support for the Mac.

Sure, you can plug in the Ornata V2 and use it like a normal keyboard (albeit with a slightly different key configuration). But while in beta, there isn’t a Mac-compatible version of the Razer Synapse 3 software. The “beta” has been going on for years at this point.

It’s clear that Razer isn’t interested in giving its Mac fans access to the plethora of configuration profiles and lighting effects that Windows fans enjoy. It’s a shame, because there are new options for ambient awareness that I would have loved to try out.

Not even side-loading Windows on your Mac works for Synapse 3. I’ve got a dual boot setup and the software refused to recognize the Ornata V2 plugged in to the USB port. What started as a minor annoyance has become downright obnoxious. Razer is sending a clear message to those with Macs that they’re second-class users. It’s a bit of gamer posturing that I could do without.

If you’re a PC user who’s looking for a full-featured keyboard, with brilliant, fully-configurable Chroma lighting and you want that mechanical “click” without having to pay the premium for actual mechanical switches, then you should definitely consider the Razer Ornata V2.

At just $99, it’s a well-priced package. You get all the cosmetic benefits of Razer’s higher-end keyboards, but don’t have to worry about getting something that’s going to be too sensitive for daily use. You can find out more on the Razer website.

Meghan Markle Speaks Out About George Floyd And Police Brutality