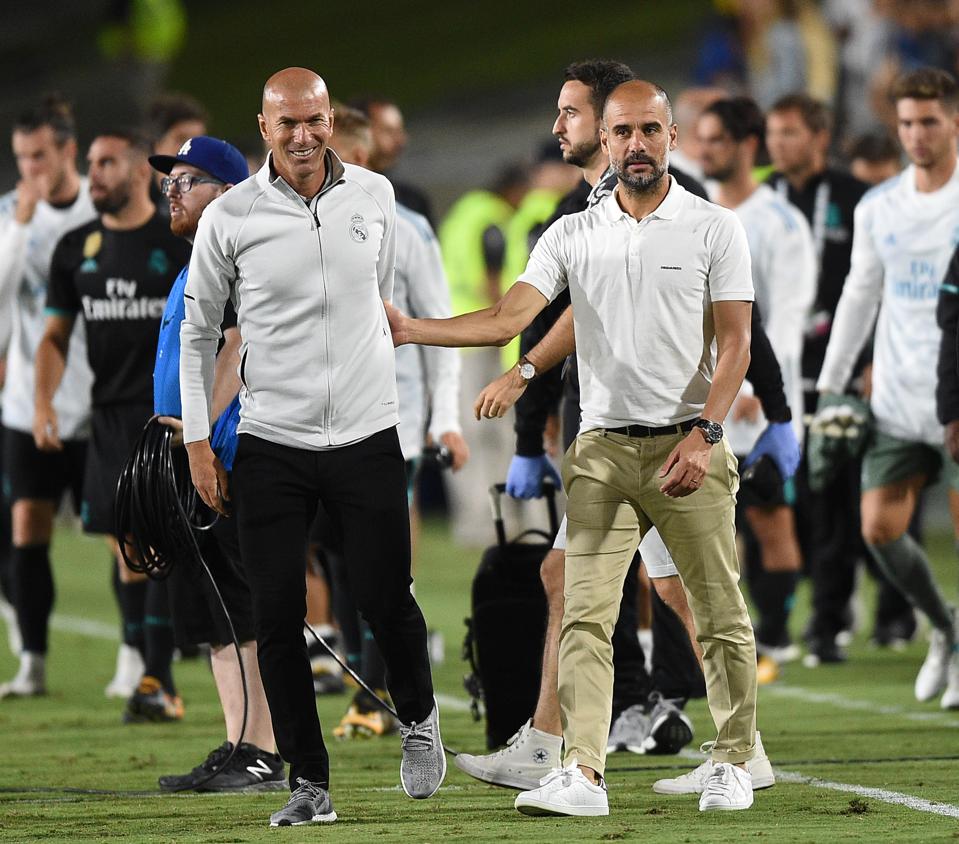 Pep Guardiola and Zinedine Zidane made some changes to their expected starting XIs. (Photo by Kevork … [+] Djansezian/Getty Images)

It’s arguably one of the ties of the Champions League Round of 16, and the expectation might have been that Real Madrid and Manchester City would play their strongest XIs, however, both Pep Guardiola and Zinedine Zidane have sprung a surprise.

Zidane has been hamstrung to a certain extent with the loss of Eden Hazard who almost certainly would’ve played had he not injured himself in the loss at Levante.

Gareth Bale’s pace is a weapon that is likely to have scared the life out of City, but once again, the Welshman misses out.

On this occasion, the winger has to be content with a place on the bench, and in Hazard’s place comes Vinicius Jr.

It’s a massive game for the young Brazilian who has struggled to find his best form since arriving at the Santiago Bernabeu.

Indeed, his goals output has been pretty pathetic to this point, so the pressure on his shoulders to deliver will be palpable.

Alongside Isco, he will also supply the bullets for Karim Benzema, who needs to get back into the scoring groove as soon as possible.

Fede Valverde’s inclusion shows how much faith Zidane has in the youngster to drive his team forward from midfield. More so when you consider that World Cup winner, Toni Kroos, has had to drop to the bench to accommodate him.

The rest of the Los Blancos XI picks itself.

For Manchester City, there’s good and bad news. Having Aymeric Laporte back in the City defence has been a game changer for Pep Guardiola.

His calmness on the ball and high level of distribution is in sharp contrast to Nicolas Otamendi, but he too starts in a centre-back berth.

Ever-present in the Champions League this season, Fernandinho has been benched to begin with for Wednesday’s fixture, and he will have company in the form of Raheem Sterling, Sergio Aguero and David Silva.

With Sterling only just coming back from injury, it’s a sensible move to ease him back in, but keeping Aguero in particular out of the starting XI is a bit of a head scratcher.

Pep will need to rely on an out of sorts Gabriel Jesus to help fire his side to victory… or maybe he has a plan up his sleeve which he will execute after the hour mark – when Real have appeared to decline sharply in recent games.

Rodrigo knows this ground well having played here for neighbours Atletico, and his battle with Valverde will be one to watch throughout the 90 minutes.

How well Los Blancos deal with Kevin de Bruyne will largely determine the outcome of this one, and one away goal definitely turns the the in favour of the visitors.

Billionaire Dan Gilbert Is Looking To Save Detroit...

How To Avoid The Business Version Of Groundhog...