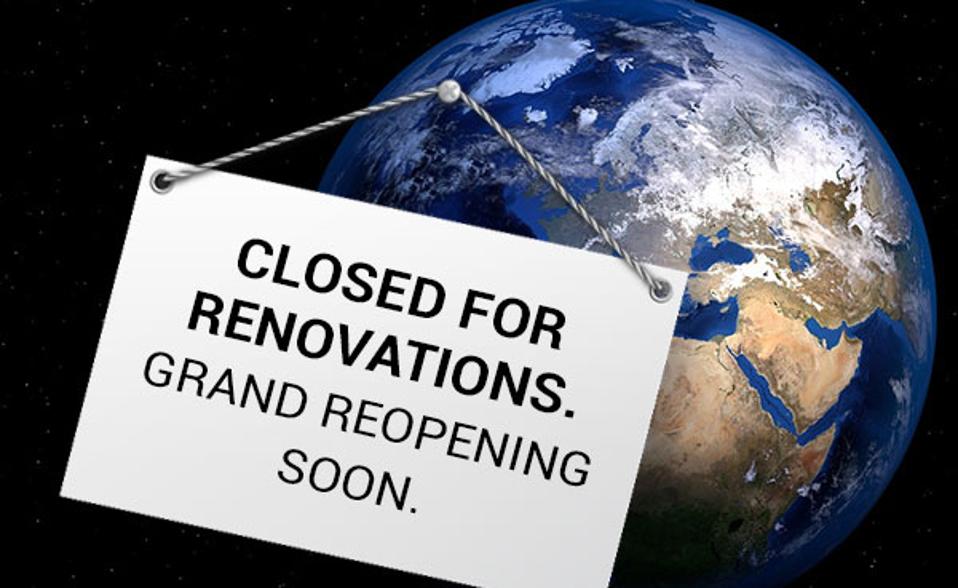 Some of you may have already picked up on this, but any discussion about the COVID-19 crisis will undoubtedly include a number of superlatives like “highest ever,” “most on record” and “unprecedented.”

Last week’s events were no exception. A head-spinning 6.6 million Americans filed new claims for unemployment benefits, bringing the two-week total to 10 million. That’s more than the combined populations of Los Angeles and Chicago.

Seeking a way to properly visualize the massive spike in initial jobless claims, analysts at Cornerstone Macro noted that they’ll need to be log-scaled now and forever for us to see the business cycle. 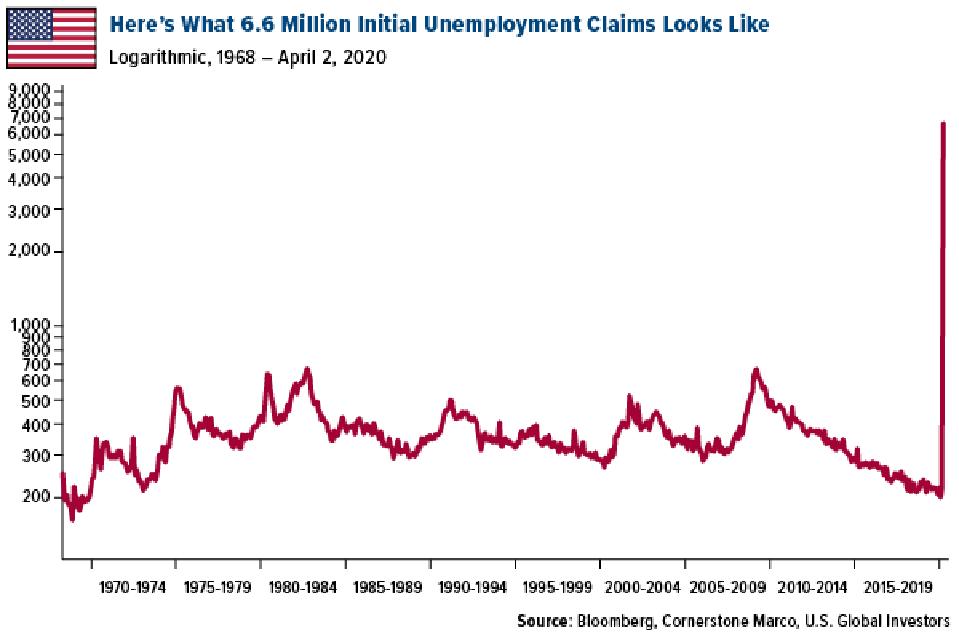 “There isn’t much to say about this chart aside from letting the chart show just how unique a backdrop today is,” Cornerstone wrote. “Yes, it’s different this time… for all to see. While it is nearly impossible to maintain these levels of initial claims going forward for too long, we wouldn’t read a ‘peak’ in this data as ‘good news.’ If claims are still near 600k in two months, we’ve got a problem.”

Every crisis has its own unique challenges, but none in my lifetime has been so far-reaching or pervasive as this one, impacting all corners and facets of human life.

As we await the curve of new coronavirus cases to flatten and begin to roll over, it may be difficult sometimes to remain hopeful. Besides finding solace in my family, friends and faith, I’m relieved to know that the world’s greatest and brightest scientists are, at this very moment, working tirelessly as one to defeat this “invisible enemy,” as President Donald Trump calls it.

Never in the history of our species “have so many experts in so many countries focused simultaneously on a single topic and with such urgency,” the New York Times wrote last week. “Nearly all other research has ground to a halt.”

I’m hopeful that this unprecedented scale of intellectual bandwidth will bring us answers and a solution. The world may be “closed” right now, but as I heard it put recently, the “grand reopening” is coming soon.

Crude oil had its best trading day ever last Thursday, increasing by nearly a full quarter after President Trump tweeted optimism that Saudi Arabia and Russia may be planning to reduce production by “approximately 10 Million Barrels, and maybe substantially more.”

Up until this point, Saudi Arabia and Russia had been increasing their output as the two competing super-producers were locked in a price war.

Although likely overly ambitious at 10 million barrels a day, a production cut is welcome news right now for the U.S. oil and gas industry, which has had to make cuts of its own to support prices. The number of active North American oil rigs has decreased by 115 so far this year, from 677 at the end of December to 562 as of last Friday, according to the Baker Hughes oil rig count. Ten percent fewer rigs were running last week compared to the week prior, representing the biggest one-week drop in North American rig activity since February 2006, when the number fell close to 17 percent.

The price jump came just two days after oil posted its worst quarter on record, slipping an incredible 66 percent as global demand dried up and stocks began to build around the world. With an estimated 92 percent of the world now under some form of social distancing because of the coronavirus pandemic, the demand destruction has been far faster than at any other time in history.

A Global Surplus of 1.8 Billion Barrels 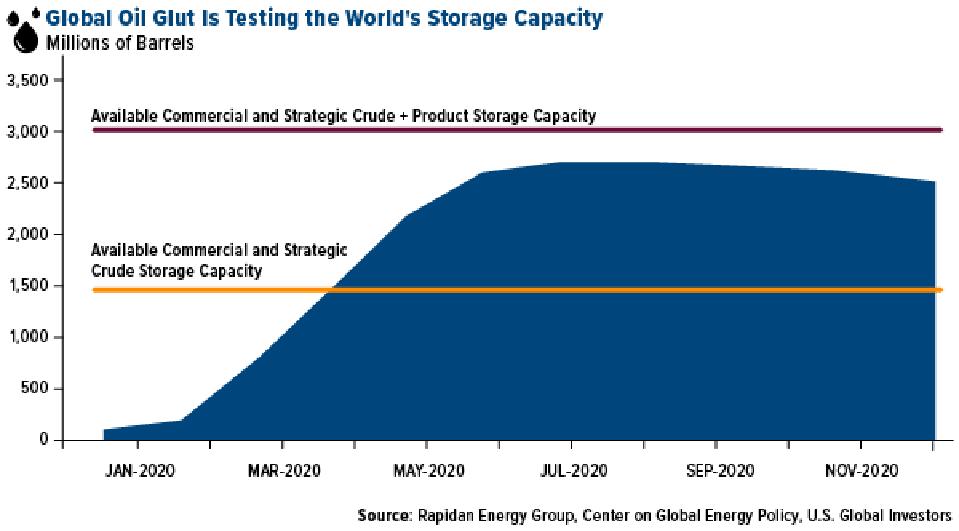 The question now is where to put all the excess supply. According to IHS Markit estimates, there’s currently only 1.6 billion barrels’ worth of storage capacity, so at some point something will have to give. Bloomberg reports that some producers, especially those that are landlocked, are already paying customers to take the oil off their hands. Meanwhile, daily rates for very large crude carriers (VLCC) have recently hit a new record, with some as high as $229,000. Oil companies are having to turn to rail yards in Texas, Saskatchewan and Manitoba to meet the growing need for a place to stash excess crude.

The visual below comes courtesy of energy market consultant Rapidan Energy Group. The group’s storage capacity estimate is slightly different from IHS Markit’s, but the point remains the same: Oil stocks are building fast, and the world is running out of places to store it.

You might wonder why we don’t just refine the stuff. The truth is that it’s far more practical to store crude than it is to turn it into a finished product for which there’s limited demand right now. Crude can be kept indefinitely. Diesel and jet fuel, on the other hand, have a shelf life of around a year, and gasoline begins to degrade after little more than a month.

Energy Earnings Expectations Revised Down the Most

The S&P 500 is expected to enter an earnings recession starting this quarter, according to Refinitiv, defined as two consecutive quarters of year-over-year declines. The financial data group has revised down its S&P 500 earnings expectations for the full year, with energy, transportation, automobiles and consumer services seeing the largest downward revisions to earnings estimates. 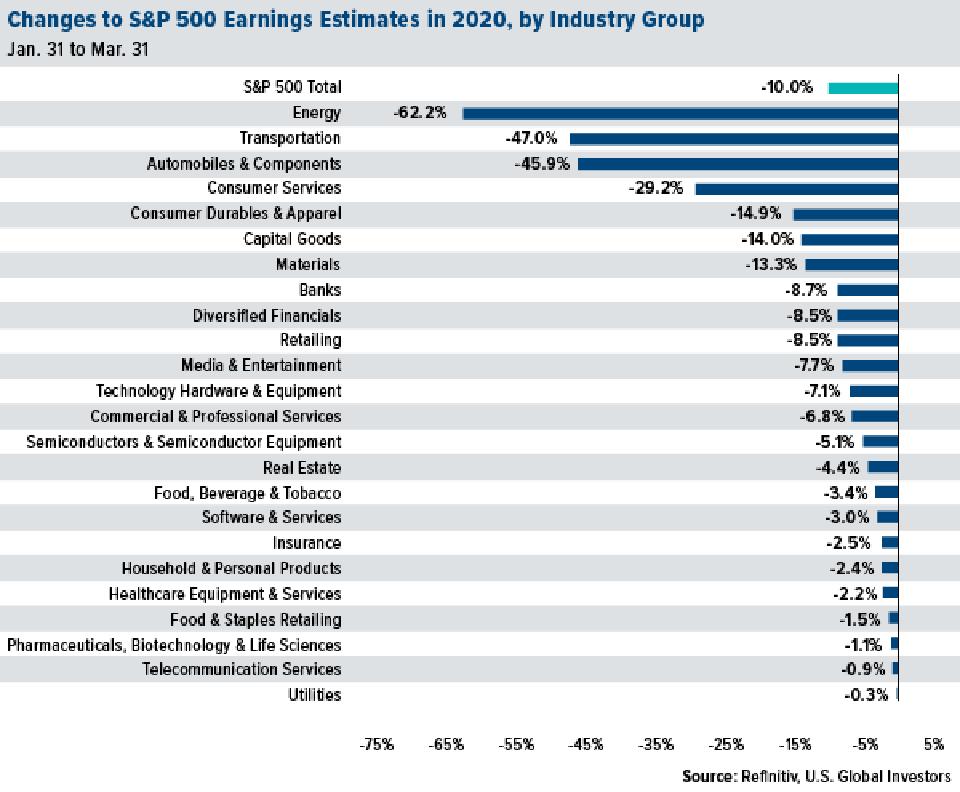 Perhaps not surprisingly, the industries that have seen the smallest downward revisions include utilities, telecommunication services, pharmaceuticals and food and staples retailing.

I believe it’s important for investors to be aware of earnings expectations so they can adjust their portfolios accordingly as we await the world’s “grand reopening.”

The Talent War: Walmart And Amazon Compete For...