Red Sox A Little Better Off, Dodgers Have Unfinished Business After Redo Of Betts Blockbuster 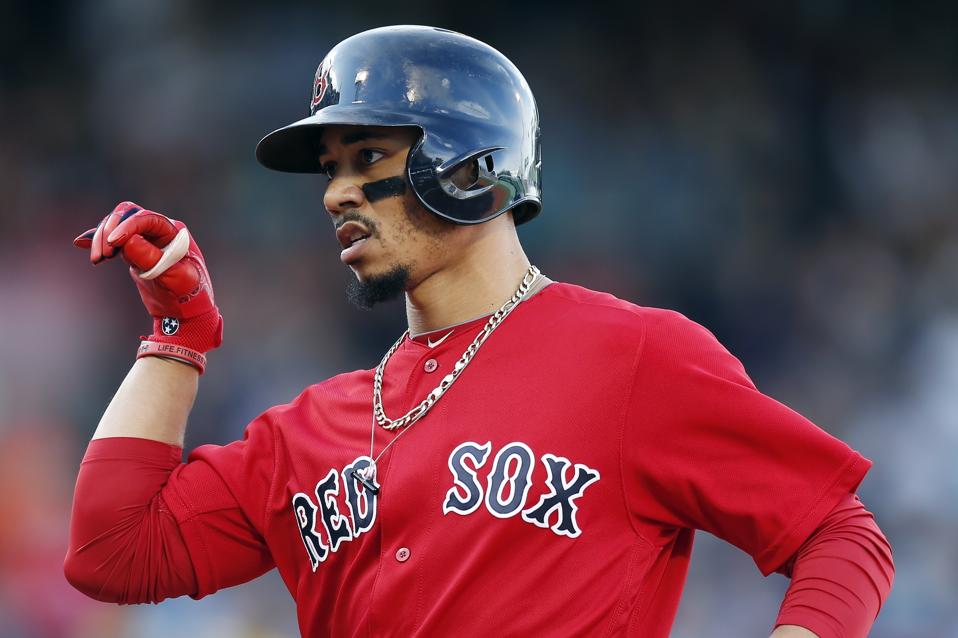 Boston Red Sox’s Mookie Betts reacts after his RBI single during the third inning of a baseball game … [+] against the Baltimore Orioles in Boston, Sunday, Sept. 29, 2019. (AP Photo/Michael Dwyer)

It’s been a thorny off-season for Major League Baseball, with the bulk of the recent headlines surrounding the fallout from the Houston Astros’ sign-stealing scandal and the bubbling fiasco surrounding the blockbuster Mookie Betts trade.

It originally was a four-team arrangement featuring the Red Sox and Dodgers in the lead roles, with the Twins and Angels serving as facilitators. Now, in its final form, we’re down to three teams, with the Angels out of the mix.

Let’s look at the changes between the first and second iterations of this deal, and assess whose lot in life has changed the most, and who ultimately fared the best.

IN: OF Joc Pederson, RHP Ross Stripling, OF Andy Pages

OUT: 2B Luis Rengifo

So, the original deal was pretty much a salary dump from the Red Sox’ perspective, as they received only Verdugo, a solid but unspectacular (and inexpensive) young outfielder, and Graterol, a relief prospect (albeit a good one) for one year of Betts, one of the game’s biggest stars, and a discounted version of Price.

The Dodgers drew an inside straight, meeting the dual goals of acquiring high-end talent that clearly made them better for 2020 while still coming in under the luxury tax threshold. They did so by upgrading from Verdugo to Betts while containing costs via the movement of Maeda, Pederson and Stripling to other locales. All four ex-Dodgers are solid players, but were a bit redundant in the Dodgers’ plans.

The Twins upgraded their 2020 club, moving a solid prospect for a discounted version of Maeda.

The Angels were in the right place at the right time in Version I of this deal, acquiring the Dodgers’ excess and shoring up clear areas of weakness on their club at the cost of little more than money.

Everything has changed now; here is the second and final version of the deal.

So, what happened, and what has changed, from all four clubs’ perspectives?

The Red Sox very likely got cold feet with regard to the original deal, as their fans (and the national media) registered their disapproval. They also likely found themselves beyond the point of no return with two of their star players and needed to find a palatable way forward.

The Dodgers found themselves in a bit of a quandary, and had to prioritize their the two main drivers of the deal from their perspective, and they ultimately chose their short-term competitive situation over financial considerations.

The Twins were really happy with the addition of Maeda at an affordable price, and were willing to kick in a little extra to push the deal over the finish line.

Angels’ ownership balked at the last-minute complications, and bailed, much to their detriment.

The Red Sox still have to face their fans after trading Mookie Freaking Betts, but they have clearly upgraded their player haul in return. Graterol, 21, ranked #9 and #76 in my 2018 and 2019 minor league pitcher prospect lists, which are based on performance and age relative to the league, projects as a reliever, albeit a very good one.

They don’t get Rengifo, but even more importantly, they still have Pederson and Stripling. They’re above the luxury tax threshold, and they needed to designate two players (Tyler White and Kyle Garlick) from their 40-man roster.

I would imagine that the Dodgers got plenty of phone calls while this deal was in limbo, with clubs lining up to assume some form of the Angels’ original role. Those teams are all getting calls back as we speak, and have at least some leverage. The Dodgers, in addition to potentially losing White/Garlick for little to nothing, will still be above the luxury tax threshold. This deal is unfinished from the Dodgers’ perspective.

It’s almost certainly finished from the Angels’, and it represents an opportunity lost. Despite the presence of Mike Trout, the best player in the game, and the off-season addition of Anthony Rendon, the Angels are clearly an unfinished product. A $7.75M Pederson in the outfield and especially a $2.1M Stripling in the rotation could really have moved the needle for the Halos.

Stripling has very quietly posted “Tru” ERA- figures of 67 and 80 in 2018-19, posting K/BB ratios and managing contact at materially better than league average levels. The only question is whether he can ramp up his innings pitched totals while maintaining his effectiveness. Especially at his salary, some club might pony up to find that out.

So, as we stand, the Dodgers “win” the deal because they got the best – and likely the second-best – player, but still have work to do to keep their house in order. The Red Sox saved some face, though they had to acquire a guy named “Jeter” to do so. The Twins maintained their value-added niche, while the Angels came thisclose to creatively improving their club. Stay tuned as this deal’s other, lesser shoe should drop soon.

This Young Millennial Switched Careers To Maximize Her Pay, Has A Goal To Retire By 32

Wisdom From Presidents Past And Why It’s Still...

Leading In The Digital Era — Two Most...

Ohisalo, Navigation Through Covid-19 Requires Leadership Based On...