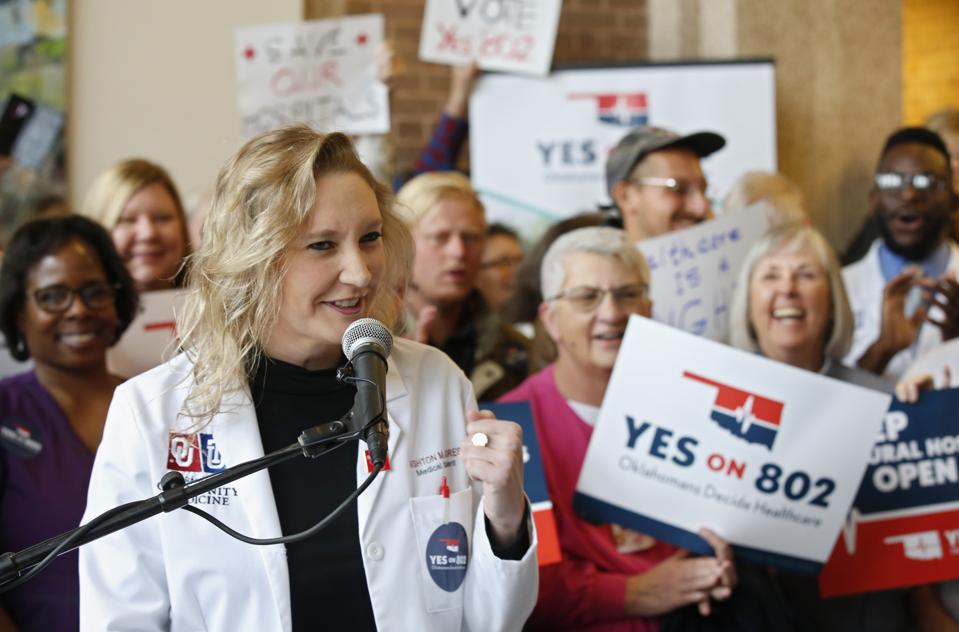 Medical student Ashton Gores speaks before supporters of Yes on 802 Oklahomans Decide Healthcare … [+] deliver petitions to the Oklahoma Secretary of State’s office, Thursday, Oct. 24, 2019, in Oklahoma City. The signatures of about 178,000 registered voters are needed to get the question on the ballot, and supporters say they obtained about 313,000 signatures. (AP Photo/Sue Ogrocki)

A research team from Vanderbilt University Medical School and Harvard Medical School considered what they called an “ongoing debate over the merits of Medicaid expansion” that has focused partly on whether the existing safety net is good enough to provide access to healthcare for poor Americans. But the research uncovered that actual health coverage is better.

“Medicaid expansion was associated with lower rates of self-reported health declines and a higher likelihood of maintaining baseline health status over time,” the 10-page analysis in the January 2020 journal Health Affairs by the Vanderbilt and Harvard researchers said.

Nine of the 14 remaining states that haven’t expanded Medicaid under the ACA are in the “southern census region, and two other non-expansion states bordered that region,” researchers said, stressing the study’s importance because the South, they said, was “home to nearly half of the nation’s uninsured population before the ACA.”

“These findings suggest that access to safety net providers in southern states is an inadequate substitute for health insurance coverage,” the Harvard and Vanderbilt researchers, led by Vanderbilt’s John Graves, wrote in Health Affairs. “Thus, nonexpanding southern states could improve the health of their low-income residents by accepting expansion funds or otherwise extending coverage to low-income residents.”

The 14 holdout states that remain have already missed out on generous federal funding of the Medicaid expansion. From 2014 through 2016, the ACA’s Medicaid expansion population was funded 100% with federal dollars. The federal government still picks up 90% or more of Medicaid expansion through 2020. It’s a better deal than before the ACA, when Medicaid programs were funded via a much less generous split between state and federal tax dollars.

The new study comes as at least two more Republican-leaning southern U.S. states work to put Medicaid expansion under the Affordable Care Act on the November general election ballot. Supporters of Medicaid expansion see the Health Affairs study as yet another signal that broadening such health coverage is a good idea.

“Study after study has shown the same thing—people in states with Medicaid expansion are better off,” said Jonathan Schleifer, executive director of The Fairness Project, which spent $6 million to support ballot measures that won in November of 2018. “Americans get it, and they’re tired of politicians valuing special interests over the lives of their own constituents. That’s why we’ve seen a revolt at the ballot box on this issue in even the deepest of red states.”

Supporters of Medicaid expansion in Missouri and Oklahoma are now working on ballot initiatives, hoping to follow the lead of successful 2018 ballot initiatives in Nebraska, Idaho and Utah. Those states, like Maine in 2017, bypassed Republican governors and legislatures to expand Medicaid by public referendum.

“People want to keep rural hospitals open and ensure that their friends and family can see a doctor no matter where they live,” Schliefer said. “That was true in Maine, Idaho, Utah and Nebraska in 2017 and 2018, and it has been true in Oklahoma and Missouri this election cycle.”

Such expansion has been a boon to health insurers like Anthem, Centene, UnitedHealth Group and CVS Health’s Aetna health insurance unit given these private insurers generally administer most Medicaid benefits in the U.S. These health insurers will be reporting their 2019 annual and fourth quarter earnings in the coming weeks and most continue to see growth thanks in part to Medicaid expansion.

Do The Golden Globes Even Really Matter Anyway?