Home Finance Remember The China ‘Hard Landing’? We Got One.
Finance 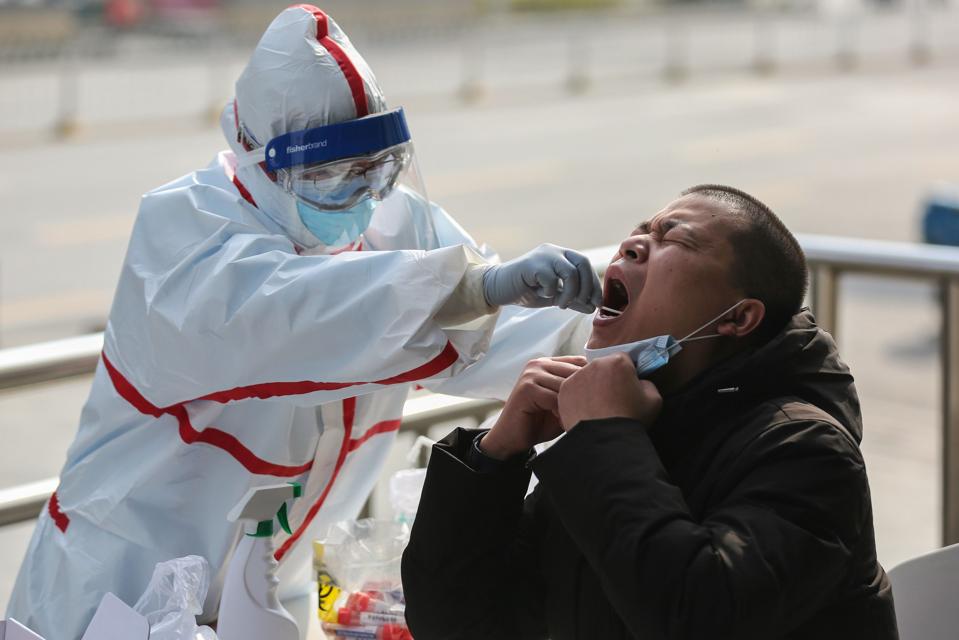 A medical staff member collects a throat sample for a nucleic acid test for the COVID-19 coronavirus … [+] in Wuhan on March 5, 2020. (Photo by STR/AFP via Getty Images)

For at least 10 years, those who don’t like China — usually for personal reasons — have been predicting a hard landing of its blockbuster economy. Others were short sellers in the market, hoping to make some money when the Chinese yuan sank back to double digits.

And for 10 years, not withstanding serious market corrections back in 2015, the economy never crashed. They’ve all been foiled and foiled again; rugs pulled out from under them by Beijing policy makers.

But not this time. The new coronavirus, which originated in Wuhan, China back in December and infected over 90,000 people worldwide, is China’s hard landing. Both literally and figuratively, China’s economy is going to zero growth in the first quarter. The world’s No. 2 economy is flatlining.

Thanks to the coronavirus, people are afraid to return to work. For two weeks now, millions of Chinese have tiptoed back to factories, with some changing their minds and refusing to go to work, preferring to wait it out yet another two weeks. This seems to be a consensus, at least in Beijing.

Office workers, those who can do work on a laptop, are lucky enough to work from home. China’s manufacturing base is on hold.

Self-quarantining also means Chinese consumers are staying home. They’re not spending money. They are the life blood of the economy. 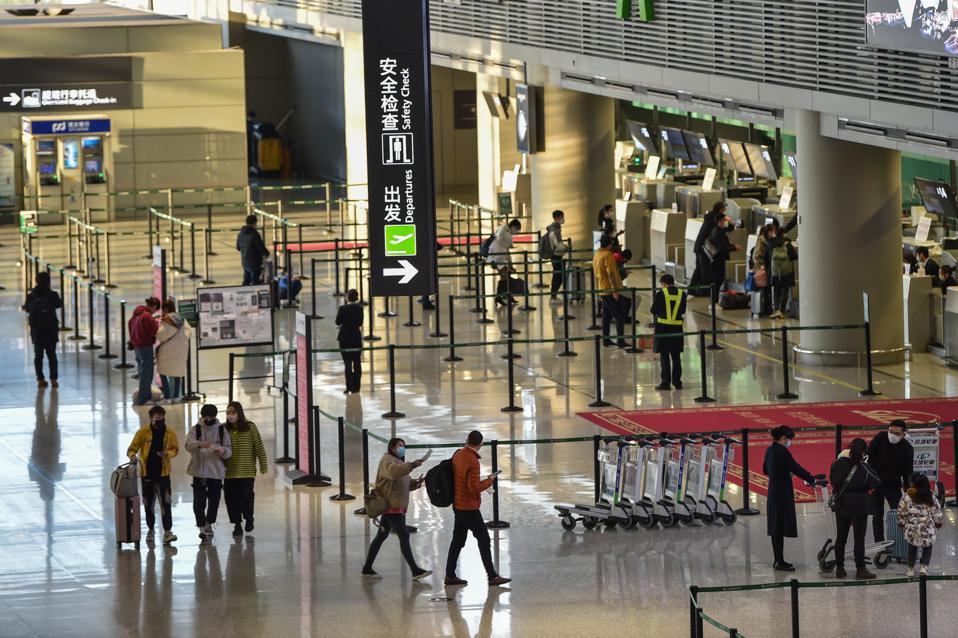 The Hongqiao International Airport in Shanghai on March 5, 2020. Empty. (Photo by HECTOR … [+] RETAMAL/AFP via Getty Images)

When the export and manufacturing economy is slow, it is Chinese consumers that power the service sector and make China grow. Those consumers are hunkering down.

This slower-than-expected rate of business resumption has Nomura cutting their first quarter China GDP to zero. It was 3% a month ago, versus the same period last year.

They also cut their quarterly growth forecast to -4.4% in the first quarter from -1.5%. And cut their annual GDP growth forecast for this year to 5% from 5.5%, dependent on a V-shape recovery post-corona, at some point in the second half if all goes according to plan.

These forecasts are based on lockdown measures and travel restrictions ending in late March. In the instance where Hubei province, the epicenter, remains on lockdown and some other regions see new outbreaks going to the end of April, then first quarter GDP goes from zero to -1% annualized.

After spending billions on near and massive international airports, Chinese air lines now have to practically give away flights. Beijing will have to come to their rescue.

Health officials in Gansu province confirmed 11 new cases of COVID-19 on Thursday, and all were returning from Iran. The newly confirmed patients are among 311 people who returned on flights from Iran between Monday and Thursday. All other passengers were placed under quarantine, according to Gansu officials.

China might have to do what other countries did to them: ban their airlines, at least, from flying to countries with high cases of the new coronavirus.

Meanwhile, for international companies that manufacture in China, the coronavirus is worse than the trade war. At least with tariff uncertainty, they were still able to make their widgets and other gadgets and get them to market. This is a game changer. Many of them are stranded, and are realizing their dependence on China is risky business. China’s had SARS and that killed 774 people; it’s had the H5N1 Avian flu and swine fever that’s killed millions of animals, and now this. What’s the next one going to be like?

For some, having already dealt with rising wages, burdensome governance and a bruising two-year tit-for-tat tariff slug out with the United States, the coronavirus outbreak is the last straw, writes Finbarr Bermingham, a trade reporter for the South China Morning Post in Hong Kong. 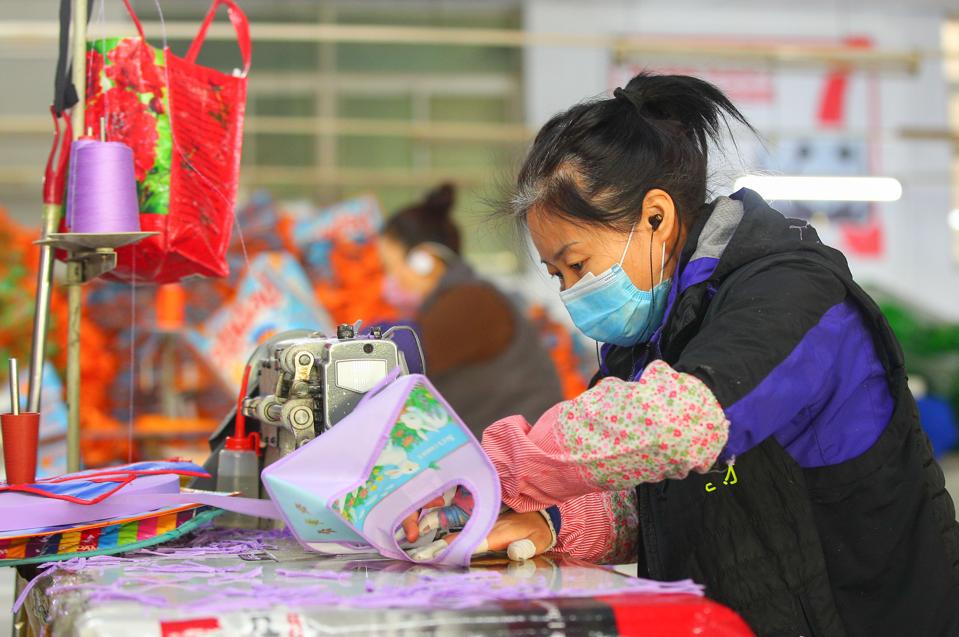 Isaac Larian, the CEO of MGA Entertainment, an American toy company, told Bermingham that his production is hamstrung by China uncertainty. He says he worries about how the impact of the virus will hit peak shopping periods.

“In four decades doing business in China, the coronavirus is the worst thing to happen,” Larian was quoted saying. “People do not realize that this is going to be a major disruption to consumer goods.”

On a scale of 1 to 10, with 10 being the worst of all outcomes for supply chain management, Aaron Sokol, CEO of sneaker manufacturer Q4 Sports in Los Angeles, says he’s at about an 8+ at the moment.

“The factories were supposed to come on line last week, but it’s not happening,” he says. “It’s a ghost town.”

See: Coronavirus Could Be The End Of China As Global Manufacturing Hub — Forbes

Beijing is faced with a much more limited policy space. Beijing has successfully coped with some demand shocks in the past, but the market’s concern is that Beijing has pretty much used up its policy space between 2008 and 2019. We recommend caution on the speed, scope and efficiency of Beijing’s stimulus measures due to surging debt (including foreign debt), a much lower return on capital, the smaller current account surplus and falling currency reserves. 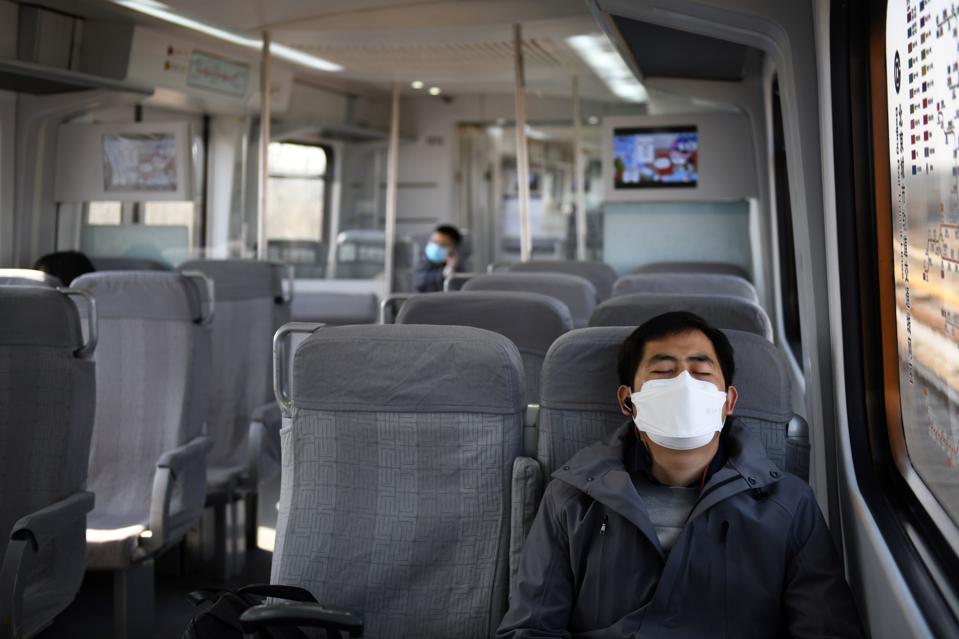 Where is everybody? A man seen on a train to the Beijing Capital Airport on March 5. Many employees, … [+] from factory workers to office workers, have not returned to normal life in the city because of COVID-19 fears. (Photo by GREG BAKER/AFP via Getty Images)

Based on numerous data from Chinese government sources like the Ministry of Transportation and the Baidu Migration Index, run by tech giant Baidu, around 47.2% of China is back to business as of March 3, Nomura estimated in a 45-page report on the coronavirus impact published yesterday.

China bears, you got your hard landing. All that’s missing now is for a few major companies to fold, and for Beijing to let them fold rather than quietly bail them out.

Here is the money shot on China versus the coronavirus: in the rest of the world, the COVID-19 is a temporary disruption. How long will that last? Six more months? SARS lasted 8 months. If this lasts 8 months, it’s out of the system by August.

But for China, this is a structural matter. The longer this lasts, the longer it is — as Bermingham from the South China Morning Post puts it — “the last straw” for China. If multinationals lose faith in China as a reliable partner after all this, plus trade war uncertainty, that’s a structural shift that China will have to tend with sooner rather than later.

Hello Cup: I Finally Tried A Menstrual Cup And Now I’m A Convert

Avoiding The Paycheck Creep. Here’s Why Your Raise...