Breaking
Florida Supreme Court Tells The American Bar Association...
How to Write Perfect Paid Social Media Marketing...
How To Boost Productivity In Your Small IT...
How Restaurants Can Design a More Sustainable Food...
Expenses That Small Business Owners Need to Be...
How You Can Make Saying Goodbye To The...
Biden To Meet Royal Family At Cornwall’s Eden...
It’s Going To Be Emotional — Going International...
Peer Mentoring For Students: STEM & Buds
7 PR Trends in 2021: The Story So...
Google Plans Radical New Google Pixel Smartphone Upgrade
Where Did COVID Come From?
Ride To Growth With A Business Vehicle
C3.ai’s Tom Siebel: How To Scale AI
Moz Acquired by iContact Marketing Corp
10 Examples of Brands Using TikTok Stitch and...
Home Business Renewable Energy Prices Hit Record Lows: How Can Utilities Benefit From Unstoppable Solar And Wind?
Business

New U.S. renewable energy investment rose 28% to a record $55.5 billion in 2019 despite pro-fossil fuel Trump administration efforts, U.S. solar installations could hit a record 19 gigawatts (GW) in 2020 despite federal tax incentives phasing out, and grid regulators estimate 330 GW of wind and solar will come online by 2029.

So, is renewable energy now unstoppable? If the question is determined by economics, the answer may be yes.

And if renewable energy is now unstoppable, what does that mean for the utilities engaged in the power sector transformation from fossil to clean energy? If the question is determined by smart utility policy design, the answer may be economic opportunity.

Lazard’s most recent Levelized Cost of Energy (LCOE) analysis shows U.S. renewable energy prices continued falling fast in 2019, with wind and solar hitting new lows, after renewables fell below the cost of coal in 2018. LCOE measures the total cost of building and operating a facility over its lifetime, and shows renewables beating fossil fuels by ever-larger margins – even without subsidies – with that trend forecast to continue for decades to come. 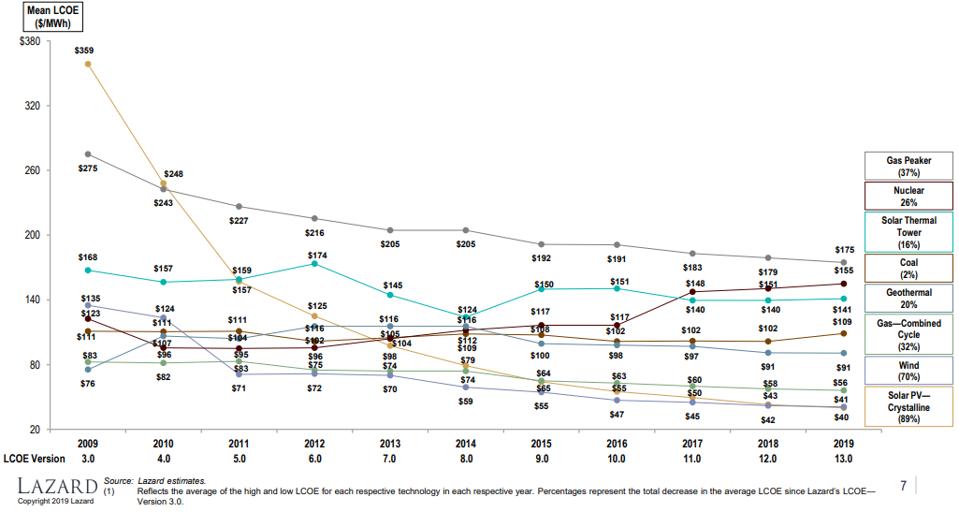 Over the last decade, wind energy prices have fallen 70% and solar photovoltaics have fallen 89% on average, according to Lazard’s 2019 report. Utility-scale renewable energy prices are now significantly below those for coal and gas generation, and they’re less than half the cost of nuclear. The latest numbers again confirm that building new clean energy generation is cheaper than running existing coal plants.

In other words, it is now cheaper to save the climate than to destroy it. Capacity installation trends reflect this economic reality, with new wind and solar generation coming online at a breakneck pace. Wind power capacity in the U.S. has more than doubled since 2010 and reached nearly 100 GW in 2018.

Utility-scale solar capacity grew by a factor of more than 30 over the same time period to more than 60 GW, and is expected to more than double over the next five years. 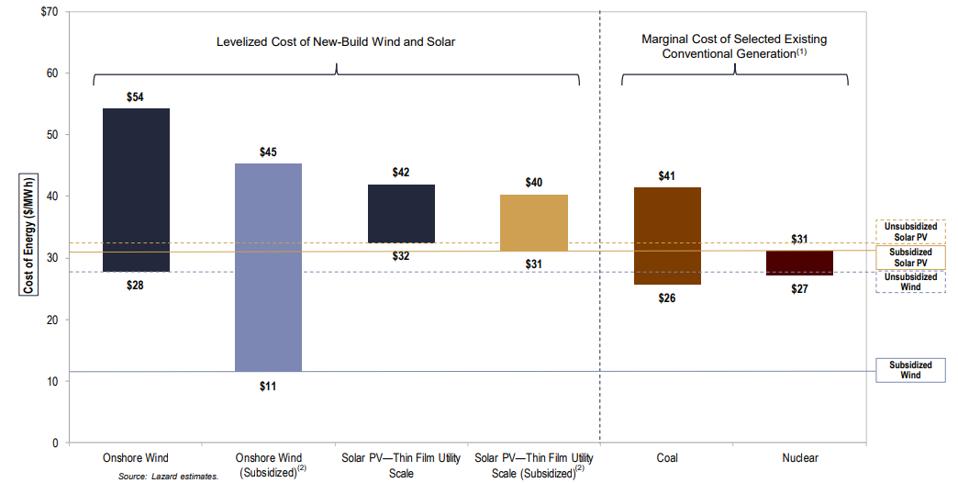 Certain renewable energy generation technologies are approaching an LCOE that is competitive with … [+] the marginal cost of existing conventional generation.

Renewable energy prices are expected to continue declining, with prices falling even farther over the next three decades, according to the National Renewable Energy Laboratory’s (NREL) 2019 Annual Technology Baseline. NREL predicts the LCOE of wind technologies will decline at least another 64% by 2050 in its optimistic scenario and at least 44% in its mid-level scenario. In those same scenarios, solar’s LCOE falls by 74% and 47% by 2050.

Thirty-seven states have recognized these full effects, conceptually if not explicitly, through renewable portfolio standards or renewable portfolio goals that diversity their electricity supply and promote economic development. A growing number of jurisdictions have set even more ambitious targets as prices have fallen with 11 states, Puerto Rico, and the District of Columbia committed to 100% clean electricity. 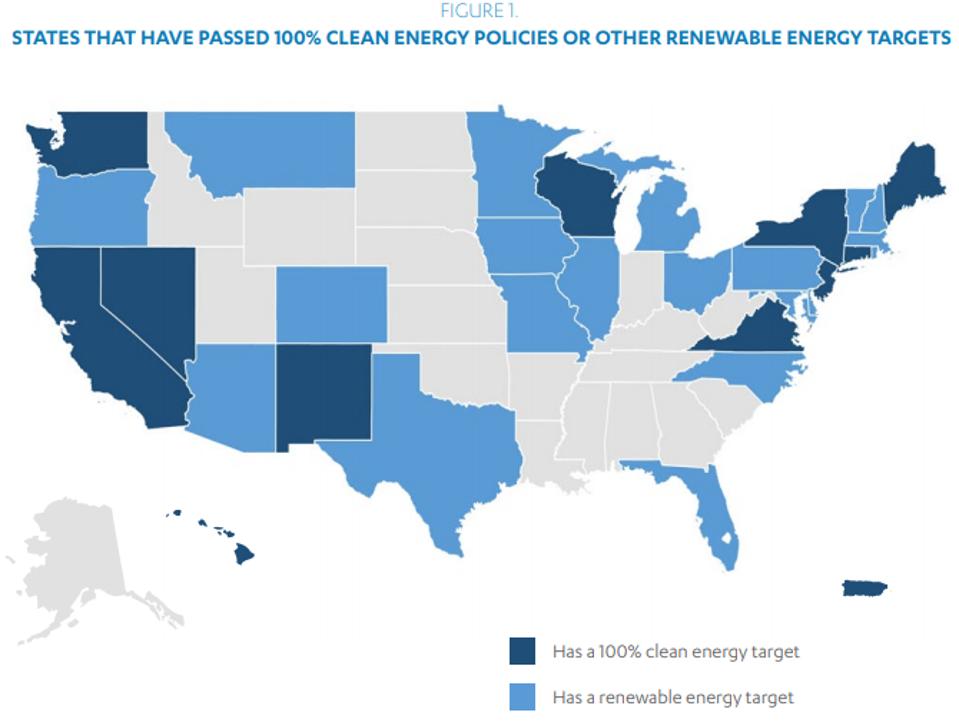 The bottom line: Renewables are now cheaper than the average cost to operate coal and average cost to build new natural gas. Plunging clean energy prices have been made possible by both R&D and the economic “learning curve” concept: As more of a technology is deployed, it becomes cheaper and more efficient.

Add it all up, and this trend isn’t going away anytime soon. Utilities can capitalize on this trend while reducing emissions, but policy helping manage the financial transition is key to encouraging a smooth and rapid transition.

Some utilities have embraced the transition to clean energy, while others are still running uneconomic coal plants and building new natural gas. But as energy economics and state targets shift from fossil fuel to clean energy, the utilities that stick with a business-as-usual approach do so at their own peril, increasing the risk of expensive stranded assets and higher consumer electricity prices.

Instead, utilities could replace fossil fuel plants with new renewables in a “steel for fuel” approach, increasing equity earnings by moving capital from uneconomic fossil power plants relying on significant fuel expenditures to plants that run on free fuel – solar and wind. The operating cost savings of this approach can be substantial, turning unproductive capital into productive, clean generating assets.

To further accelerate this transition, regulators can focus on complementary policies in wholesale power markets that place these cheap and clean generation resources on an equal footing with traditional fossil sources. Wholesale power markets were designed around a system where large centralized plants supplied inflexible consumer demand, but that paradigm is shifting as carbon-free resources displace fossil fuel generation. 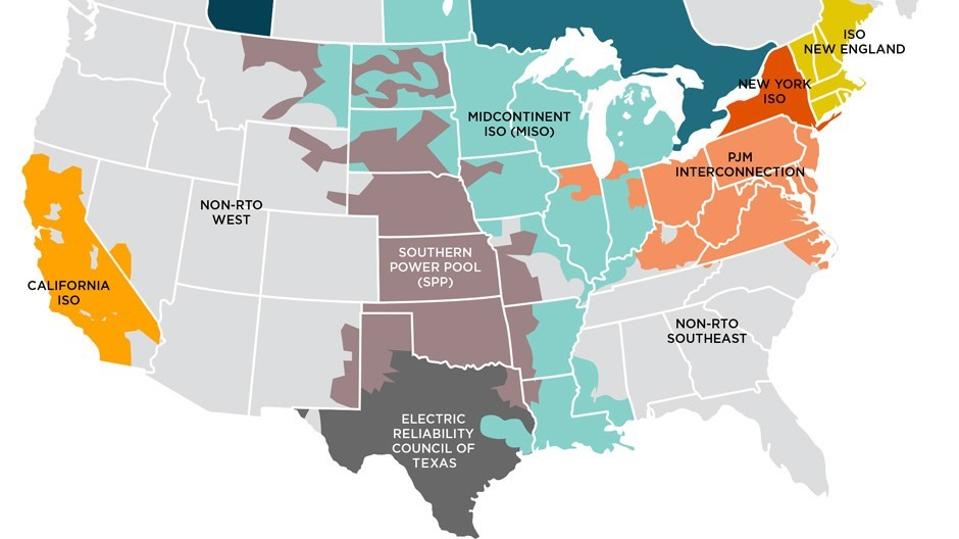 Wholesale market reform can help utilities take advantage of abundant cheap and clean resources by including technology-neutral, market-based procurement along with performance-based regulation, which shifts utility focus away from capital investment toward delivering value for customers. Finally, regulators and utilities should promote demand response, boost transmission capacity, and upgrade distribution infrastructure, among other complementary electricity policies, to accommodate the influx of renewables.

In Colorado, for example, effective utility regulation has driven a surge of low-cost bids for wind and solar projects. And in Hawaii, the legal separation of revenue from capital expenditures is an example of performance-based regulation that will help the state achieve its 100% renewable energy target.

Renewable energy’s economic opportunity is too big to pass up

As renewable energy prices keep falling while clean energy targets keep rising, policymakers must consider forward-looking utility and power market regulations to reach their decarbonization goals while helping utilities capitalize on the clean energy transition. With prices for wind and solar at all-time lows, the opportunity is too big to pass up.

Lies And The Lying Liars Who Try To Expense Them

Building A Pentest Program To Prevent A Data Breach