Globally, some 176 gigawatts (GW) of renewable generating capacity was added in 2019, slightly less than the 179 GW added in 2018. That meant 2019 was the first year that the growth of renewables declined in IRENA’s records going back to 2001.

But while the rate of expansion slowed a little, the growth in renewable energy was still far ahead of growth in fossil fuels – something that has been true for the past five years. Overall, renewable energy now accounts for almost 35% of global power capacity, up from 33.3% a year earlier. 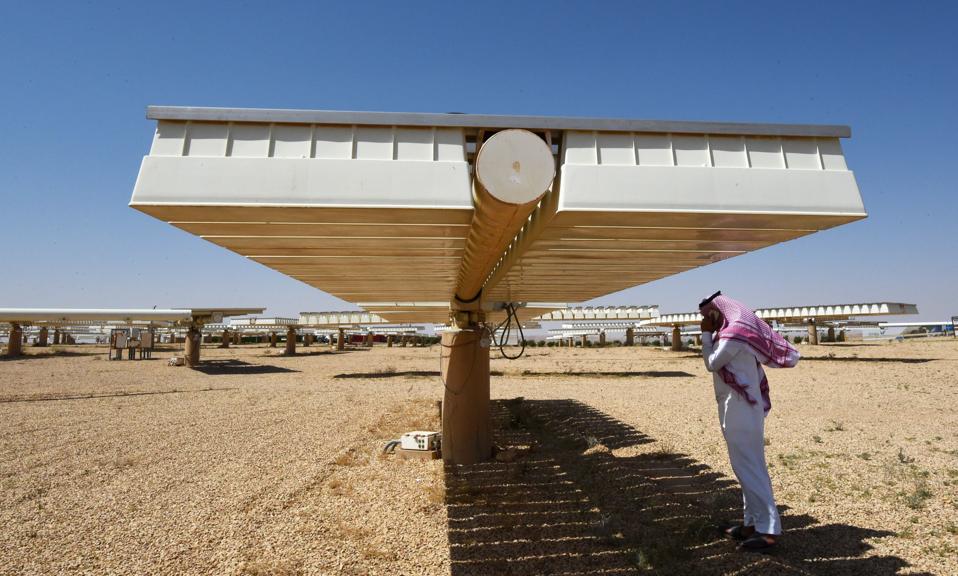 A Saudi man talks on his cell phone under the shade of solar panel at a solar energy plant in … [+] Uyayna, north of Riyadh, on March 29, 2018. The Middle East region was a laggard in terms of renewable enegy development in 2019 (Photo: FAYEZ NURELDINE/AFP via Getty Images)

There was a lot of variance by region though. More than half the new capacity was added in Asia. Like most parts of the world, it saw renewables account for at least 70% of total capacity expansion. There were two laggards though. In Africa the proportion was only just over half, at 52%, while in the Middle East it was just 26%.

As in previous years, a small number of renewable technologies dominated. Solar and wind accounted for 90% of renewable capacity added in 2019. There was 98 GW of solar power added to the world’s energy mix, along with 60 GW of wind power. Between them these two technologies generate almost half of all renewable energy around the world, with 23% for solar and 25% for wind, but hydropower remains the dominant energy source with 47% of the total.

Growth may well be slower again this year as a result of the coronavirus pandemic which, as well as representing a healthcare emergency, is causing economic misery across the world and reducing demand for electricity.

Low prices for conventional fuels also make it seem less urgent for governments to switch to cleaner sources of energy. Oil has a minor role in electricity generation, so the collapse in its price this year will have a limited direct impact, but it has contributed to the downward pressure on natural gas prices.

Edinburgh-based energy consultancy Wood Mackenzie has cut its forecast additions of wind energy capacity for 2020 by 4.9 GW and of solar installations by 23.1 GW. It also thinks electric vehicle sales will drop by 43% year-on-year in 2020.

“Over half the world’s population is now under lockdown as demand for power drops and risk of global recession grows,” the consultancy said in industry update published earlier today.

“The outbreak of Covid-19 threatens global supply chains in many sectors and is therefore likely to have an impact on renewable energy,” he said. “The severity and duration of both situations remains to be seen.”

However, he insisted “he long-term planning horizons involved, and the momentum that currently exists in the energy transformation, means neither low oil prices nor Covid-19 will interrupt or change our path towards decarbonization of our societies.”

Trump Is Robbing The Rust Belt To Buy...