Breaking
The Ultimate Guide to Saving Money
Lights, Camera, Action—Is There A Post-Covid Future For...
7 Ways to Reduce Human Errors in Your...
How ‘Couples Therapy’ Used Technology To Cope With...
Can You Settle Your Student Loans Or Negotiate...
How to Use Amazon Attribution For Ad Campaigns
What are the Makings of a High-Quality Link?
How To Quickly Start And Scale Your Business
Terra Virtua: What NFTs Can Teach Us About...
5 Easy Steps To Prepare Content For E-A-T...
Physical Inactivity Linked To More Severe Covid-19 Infection...
The 2021 Estimated Tax Dilemma: What Tax-Return Pros...
Want To Digitally Transform Your Business? Start With...
How to Optimize Google My Business and Leverage...
Debunking Link Building Myths in 2021
How, When And Where You Can Gaze At...
Home Technology Renewables Poised To Clean Up From Oil’s Price Spill
Technology

Renewables Poised To Clean Up From Oil’s Price Spill

Saudi Arabia abruptly altered its oil production strategy in early March and began to flood the market with cheap oil. Financial markets worldwide hemorrhaged value at the prospect of a protracted and painful price war, and American oil firms immediately cut back spending and dividend payments as the price for their primary product halved.  As of this morning, WTI Crude (a pricing benchmark tied to U.S. supply) was barely north of $20/bbl, prices not seen since 2002.

This sudden tumult represents an opportunity for the renewable energy sector.  At first glance, this may sound counterintuitive. After all, oil prices seem largely unrelated to the prospects of wind, solar, and other renewables in the electricity generation sector, because in the United States the primary fossil source of electricity is natural gas.  Natural gas prices have been largely uncorrelated with the price of oil since 2007, when large-scale domestic shale-gas production began to come online (see chart). In other parts of the world, coal drives electricity generation, which is similarly decoupled. Virtually nobody uses oil as a primary electricity source, except in certain very specific locations, such as Hawaii, where the demands of unique geography and supply logistics align to make oil the best bet for power production. 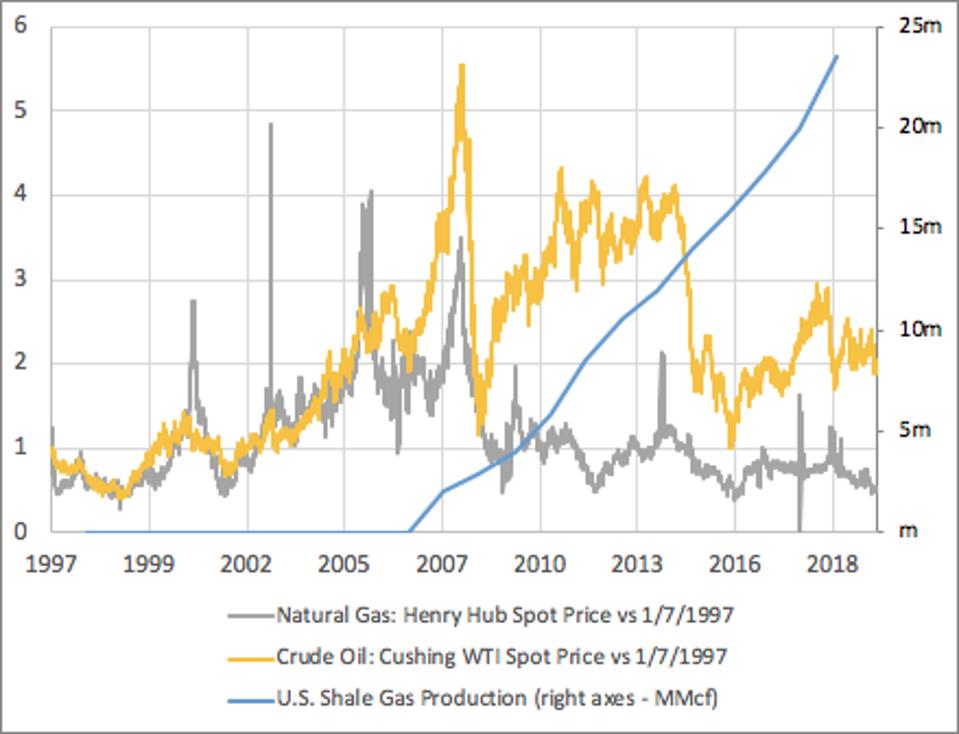 Oil’s link to renewables instead comes through competition in the financing marketplace.  As new projects are developed and financing is sought, the infrastructure funds that provide capital to enable these developments naturally prefer projects that promise the most attractive financial returns.  With relatively high prices over the last decade and unmatched value as a transportation fuel, oil exploration has beaten out renewable project development on the financial metrics time after time.

The oil shocks over the last weeks could dramatically alter that calculus.  Revenues for potential oil projects have suddenly dropped by over 50%, and futures contracts currently show only a modest improvement in prices by year’s end.  The market is already pricing in the expectation that oil prices remain below $40/bbl for the foreseeable future, a dramatic change from the $55+/bbl that has been the norm for the last few years.

Even if prices do recover, the sudden volatility will still weigh on the minds of project investors.  Oil markets haven’t resembled a purely competitive market since the mid 1960s, and since that time prices have been regularly impacted by sudden and unforeseen changes in supply by OPEC producers, primarily Saudi Arabia.  The rise in shale-oil in the U.S. in the last decade has effectively put a cap on prices and provided a counterweight to OPEC’s pricing power. But the muscle being flexed now shows that the OPEC nations and Russia still maintain substantial influence over the fate of American oil producers.  This ‘stroke of the pen’ risk, now that it has again bared its head, may be unlikely to be forgotten in the near future.

Renewables, by contrast, have no supply risk whatsoever, and are primarily exposed to fluctuations in the price of electricity.  Insomuch as this relates to the price of natural gas, investors in the U.S. will take comfort knowing gas is essentially a local market, with U.S. prices driven by supply and demand within North America; there is little ability to arbitrage against global markets due to limited export capacity. Therefore, as oil prices come down, project financiers should start to turn more of their attention to the new safe bets that offer more durable returns: wind, solar, and the like.

This isn’t to say that renewables don’t face headwinds in the current environment.  Cheap oil also competes with renewables in the transportation sector. Electric Vehicles will be less competitive with their gasoline-powered cousins as the price for gasoline at the pump drops, lowering demand for new grid capacity and forcing renewables to wait for retirements of current assets.  The price for natural gas in the U.S. is dropping as well, driven primarily by the sudden decrease in demand due to the shuttering of entire industries. These drops make fossil power from natural gas more competitive with their renewable counterparts.

Futures markets, however, are currently pricing in a full rebound of natural gas prices by year’s end, with the futures contract for Henry Hub for December 2020 currently priced above market levels at the end of 2019.  This suggests that the drop in prices of natural gas will be temporary, and investors making long-term bets do not view the current situation as durable.  Further, natural gas prices are just one component of the price paid by utilities to power producers, and so a drop in natural gas prices doesn’t necessarily imply a similar fall in the rates negotiated in new power purchase agreements. So the drop in natural gas prices evident in the market now looks to be temporary, and unlikely to dramatically alter the widespread conclusion that renewables are now the cheapest power source to build.

Altogether, the oil market has changed dramatically in the last three weeks, in ways unforseen just a few short months ago.  But despite the headlines and worrying drops across financial markets, opportunity lies in these disruptions. Renewables are well positioned to capitalize.

Five Powerful Principles For Navigating Through A Crisis