Report: Kyrie Irving Could Miss Another Two To Three Weeks 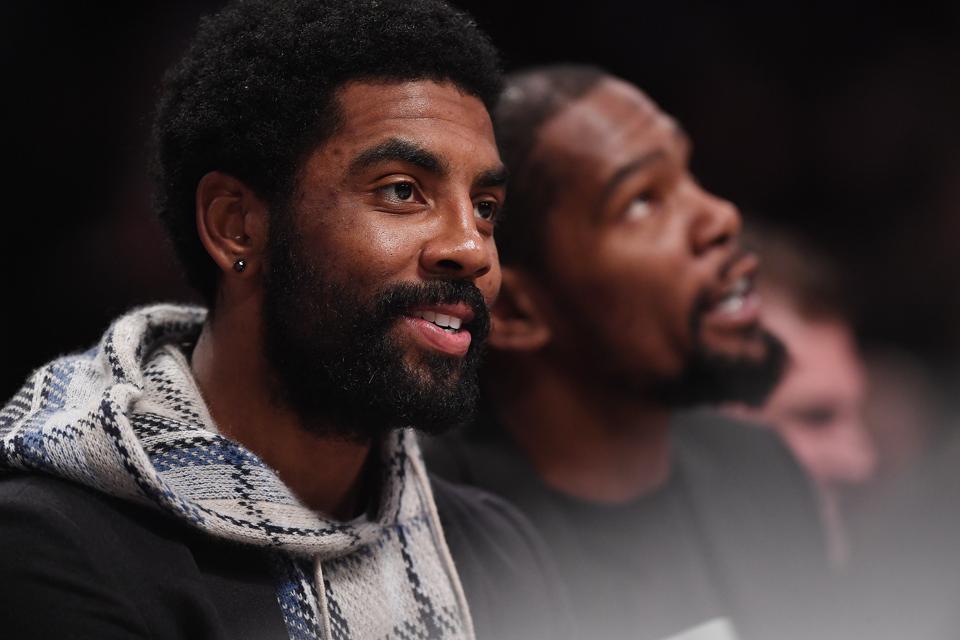 NEW YORK, NEW YORK – DECEMBER 15: Kyrie Irving #11 and Kevin Durant #7 of the Brooklyn Nets during … [+] the game against the Philadelphia 76ers at Barclays Center on December 15, 2019 in the Brooklyn borough of New York City. NOTE TO USER: User expressly acknowledges and agrees that, by downloading and or using this photograph, User is consenting to the terms and conditions of the Getty Images License Agreement. (Photo by Matteo Marchi/Getty Images)

Kyrie Irving, who has been sidelined since mid-November, may not return until mid-January.

According to Brandon Robinson of Heavy.com, “a source within the Nets organization stated that Irving could be out two to three more weeks with what they are privately calling thoracic bursitis.“

“We’re getting second and third opinions before doing anything,” the source stated on Monday, per the report. Irving is “taking his time and trying to get it right,” and it was made known that “health is the most important thing,” understandably.

Irving was initially injured back on November 12th in a loss at Utah. He played two nights later in Denver but has been sidelined since. At the time, the Nets were 4-7. Most pundits assumed Brooklyn would have a tough time keeping their heads above water after losing their leading scorer.

However, that’s when Spencer Dinwiddie stepped in and stepped up. The Nets won five of their first six games without Irving, and Dinwiddie earned his first-career Player of the Week honors for games played from Nov. 12th through the 18th.

Since replacing Irving in the starting lineup, Dinwiddie leads the team in points, assists, free throws made and attempted, and usage rate. He is third in offensive rating and net rating. Per NBA.com, he has recorded a 20-point game, a double-double, or both in each of his 18 starts.

Dinwiddie is one of only five players averaging 26+ points and 7+ assists over the last six weeks; the other four are Lebron James, Luka Doncic, Trae Young and James Harden.

He’s been especially effective of late, scoring at least 24 points and dishing out at least five dimes in each of his last seven games. Per Basketball-Reference, that’s the longest such streak in Nets franchise history. He also shot above 40% in each of those seven contests. 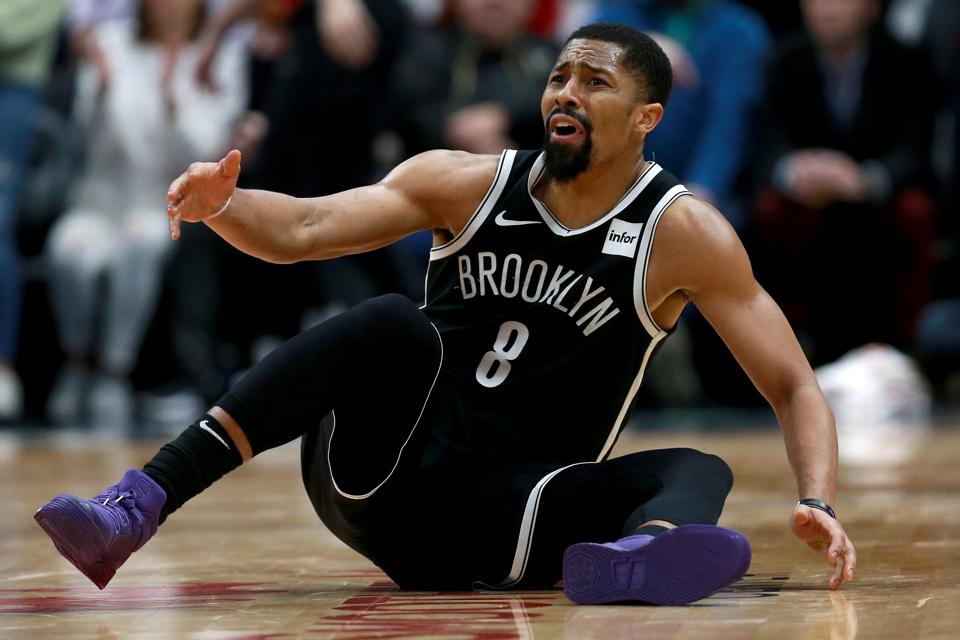 NEW ORLEANS, LOUISIANA – DECEMBER 17: Spencer Dinwiddie #8 of the Brooklyn Nets reacts to a call … [+] during a NBA game against the New Orleans Pelicans at Smoothie King Center on December 17, 2019 in New Orleans, Louisiana. NOTE TO USER: User expressly acknowledges and agrees that, by downloading and or using this photograph, User is consenting to the terms and conditions of the Getty Images License Agreement. (Photo by Sean Gardner/Getty Images)

Looking at the big picture, it’s an incredible story. A player who was traded and waived and toiled in the G League before getting a real shot in the NBA, is now making a case for an All-Star nomination. Dinwiddie had zero 30-point games over the first four years of his NBA career, yet had three 30-point games last week alone. Over the Nets past three contests, Dinwiddie is putting up 37.0 points a night and averaging 13.0 points (on 60.9% shooting) in the fourth quarter alone. He’s the first Net to record 30+ points in three straight games this decade.

And, it’s not as though Dinwiddie is putting up impressive stats in losing efforts. All told, the Nets are 12-6 in the 18 games they’ve played without Irving. The biggest improvement has come on the defensive end. In their first 11 contests this season (Kyrie started all 11), the Nets ranked 27th in the NBA in opponents’ points per game (allowing 119.5 ppg), 25th in Defensive Rating and 13th in opponents’ effective FG percentage.

In the 18 games with Dinwiddie as the team’s starting point guard, the Nets rank 10th on opponents’ points per game (106.9 ppg), 14th in DefRtg, and lead the league, ranking No.1 in opponents’ eFG%.

Their 12-6 record (.667 winning percentage) is the sixth-best in the East over the last six weeks, trailing only the Bucks, Sixers, Pacers, Heat and Raptors.

Speaking with reporters on Monday, coach Kenny Atkinson said that Irving has yet to be cleared for contact and that the team does not anticipate Kyrie playing in the Nets’ game against the Knicks on Thursday.

Considering how well Dinwiddie, and the team as a whole, has been playing in his absence, it makes sense for the Nets to err on the side of caution and give their star free-agent addition as much time as he needs to get healthy.

Think You Know Energy And Climate? Take My 2019 Quiz And See If You Do

Why Booking Holdings’ Agency Revenue Will See Single-Digit Growth in 2019?

US Digital Magazine Readership In The ‘Home’ And...