Missing your favorite coworkers while sheltering in place? Some monkeys might be able to relate.

New research from Utrecht University in the Netherlands suggests long-tailed macaques are less stressed when they cooperate with friends to complete tasks. 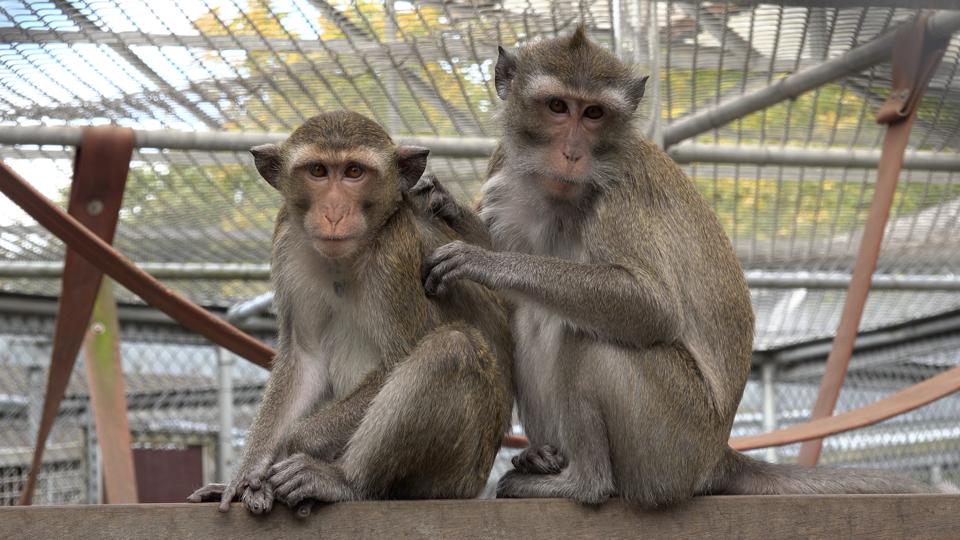 Monkeys in the study had to pull strings attached to a platform. If one monkey pulled alone, the platform wouldn’t move. But if two monkeys pulled together the platform came closer, so both monkeys could reach the treats. Monkeys that were paired with their friends had lower stress hormones after doing the activity than they had before.

Whether the monkeys succeeded in getting the treats didn’t impact their stress levels: even monkeys who failed to retrieve the treats experienced a reduction of stress hormones.

In the experiment’s control, the test was adjusted so that one monkey could pull the platform alone. Solo monkeys did not show a reduction in stress. Neither did monkeys who just sat next to their friends for the same amount of time as the test, or monkeys who took the test with a monkey that they were not friendly with.

These results were published in a paper in Royal Society Open Science.

Dustin Rubenstein,  a behavioral and evolutionary ecologist at Columbia University, said the study’s results are consistent with other research in primates and other social animals that has shown cooperative social relationships can help reduce stress. He said the study is a reminder that the survival benefits of cooperation go beyond basic reproduction.

“Even in a time of extreme social distancing like we are experiencing now, maintaining social bonds and cooperating with others may have a critical, positive impact on health for animals that are social by nature,” said Rubenstein.

Martina Stocker, the lead author on the paper, said she spent a few months training the monkeys in the study to do the string test. The troop she worked with had 30 monkeys, but only 14 successfully figured out how to pull in the platform. Stocker also trained the monkeys to give her saliva samples, from which she could measure stress hormone levels.

By observing the monkeys grooming each other and sitting together, Stocker was able to figure out which monkeys were friendly with each other. She used those observations to make the friendly pairings in the test.

Stocker said she isn’t sure why cooperating reduced monkeys’ stress. She speculated that it might have had something to do with oxytocin, a social bonding hormone, which can reduce the stress hormone cortisol.

Can AI Detect Your Emotion Just By How...