Breaking
Boston Globe Starting “Fresh Start” Initiative As Part...
Can Money Protect You From Covid-19? It May...
The Most Important Voice In Artificial Intelligence: Frontline...
Amazon’s Small Business Empowerment Team Is Helping Entrepreneurs...
10 Ways For Entrepreneurs To Power Through Tough...
Will The Cloud Take Down The Mainframe?
How Itamar Medical Stock Could Triple
How To Cash In On Biden’s Stimulus With...
The Refactoring X-Factor Behind Software Modernization
3 Habits Of Millionaires
Will The Stock Market Sell Off As Biden...
Microsoft Reverses Xbox Live Gold Price Increase Following...
Weekend Favs January 23
FDA Approves First Monthly Injections To Treat HIV
Low Volatility Investing Works In China Too
How 2020 Introduced Big Technology Startup Opportunities
Home Business Retailers Have A Lot To Learn From Illinois’ Dispensaries And $40B In Cannabis Sales
Business 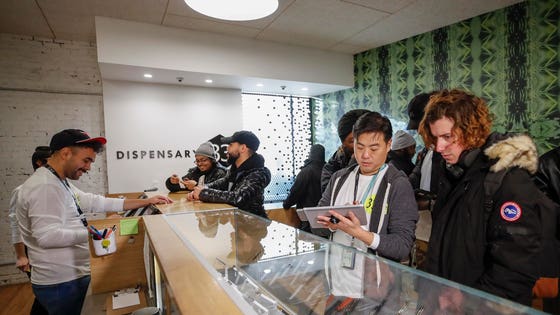 Nearly two months into legal recreational cannabis sales in Illinois, there is a lot retailers can learn from dispensaries here, including how to leverage technology to manage demand and ease pain points for customers.

Illinois rang up nearly $40 million in sales of legal cannabis in January, the first month of recreational availability. It’s astounding, especially when accounting for the fact that most dispensaries ran out of product within a week after going legal on Jan. 1.

That’s right, dispensaries ran out of many products almost immediately. Some amount had to be reserved for medical marijuana patients – Illinois legalized medicinal use in 2018 in what is considered a small and tightly controlled test. Recreational licenses were made available to the state’s 55 medical dispensaries and 37 were awarded by the end of 2019.

Dispensaries took a varied approach to operations this first month and offer a great overview of how retailers across many channels could better approach their own businesses to improve operations and customer service.

There are some sound lessons here about real fundamental truths of retail.

Jan. 1 was highly anticipated in Illinois, particularly in Chicago, where I live. Stores had months to plan, to estimate and obtain inventory and create a system to manage customer traffic and process orders. Much like when retailers like Target or H&M do high-profile designer partnerships that have customers standing in long lines before dawn, websites crashing and inventory selling out fast to leave loads of dissatisfied shoppers.

Things pretty much went down just that way in Chicago on Jan. 1: Inventory was not managed well, out of stocks were the norm and the customers who began lining up in the predawn cold were left, dare I say it, out in the cold.

Sure, this is a fine place to insert a joke or two about how chill cannabis customers are, but in our personal experience, the entire process was well done if ultimately a bit disappointing.

We joined the line mid-morning on Jan.1, after the most eager had gone home. It stretched for about a block and moved quickly. Card tables with tented coverings were set up at the corner, across from Dispensary 33 in the Andersonville neighborhood on Chicago’s north side. Here, people were added to a wait list being managed via a text messaging service similar to some used by restaurants. We immediately received a confirmation text with a start time, were verbally told the wait would likely be two hours and off we went for a New Year’s Day brunch to wait for our notification text.

Earlier in the week, neighbors were told of the location’s plans for that day to help manage expectations. Nearby businesses were on board with related events as bars, breakfast spots and coffee houses all opened early with planned specials in line with the day.

It was a great way to raise all boats, economically. Crowds had access to hot drinks and food, and there was an overall festive feel that helped alleviate disappointment that things weren’t moving more quickly.

In fact, they moved a lot more slowly than anyone anticipated.

Our wait stretched on well past brunch. We wandered back and were told things were significantly delayed. Signups were closed for the day, although staffers and security stuck around to address the steady flow of customers – both those who had registered, like us, and those hoping to.

So by noon that very first day, the dispensary discovered its first big operational problem. Registering people was quick, ushering them through the sales process inside was not. It took just a couple of minutes to input a name and mobile phone number, but closer to 20 or 30 minutes to check identification once inside, connect each customer to their own salesperson (Illinois is using a “budtender” assisted sale model, at least for the time being), collect all the items in an order and accept payment in cash.

We were among the last people allowed to register that day and almost the very last to ultimately make a purchase before the dispensary closed at 9 pm that night. We live close by and simply went home and about our day as planned, curious as to whether a text would arrive at all.

At 8:10 pm it did. We had 15 minutes to return and get in another line outside the dispensary. That line moved quickly but allowed enough time to chat with fellow customers about the experience and employees about what went wrong (and right).

The opportunity to buy legal cannabis was an important milestone for many. Just being present on day one was the equivalent of being first in line for a major concert or World Series tickets to see the Cubs finally play. It was hard to dampen that enthusiasm, even for people who might not get in that coveted door.

Organizers noted the failures of the mobile notification system, which had just one function: to tell the customer when to return. There was no way to let them know things were taking longer, or that they might not be called that day at all. Two-way communications weren’t possible at all and what seemed like a simple SMS tool turned out to be too simple, by far.

Retailers know they need to research, develop and test before a big sales event. Chicago-area dispensaries learned the hard way that controlled tests are critical (see Ron Johnson and JCPenney). Illinois dispensaries couldn’t trial these programs in the way other retailers can, but they serve to reinforce its importance.

So many unanticipated things happened in the first month of recreational cannabis sales that would have been discovered and solved for had they the opportunity to test. Mainstream retailers have those opportunities and even then, often fail to do so.

They also often fail to manage communications with customers in the event things go wrong. Illinois cannabis shops seemed adept at using all the tools at their disposal to connect to customers. Social channels such as Facebook and Instagram were used to make announcements throughout the day and facilitate two-way communications via comments and messaging. This has continued through February as product shortages continue.

Each day, Dispensary 33 posts their inventory availability and times to sign up for appointments through their social channels. Keeping customers up to date and streets clear in a way that keeps the peace with neighboring residents.

Illinois’ recreational cannabis kick off has made for some great headlines: $40 million in one month is strong, especially with no product left to sell after that first week. High taxes of close to 30% were another stunner, but proof that if you have a product people want, they will spend, even with those eye-popping taxes added on.

Retailers can learn a lot from this business, even in its infancy. The basic principles of selling legal recreational cannabis aren’t that much different than selling apparel, electronics or sneakers. Have a good product that people want, be transparent about product availability and processes, leverage technology where appropriate – and be sure to test and adjust as needed.

Retailers needn’t be in the weed business to flower, but they can certainly learn a thing or two from these new operations that are.

Did TCJA’s Corporate Rate Cuts Work As Promised? No Signs Yet.