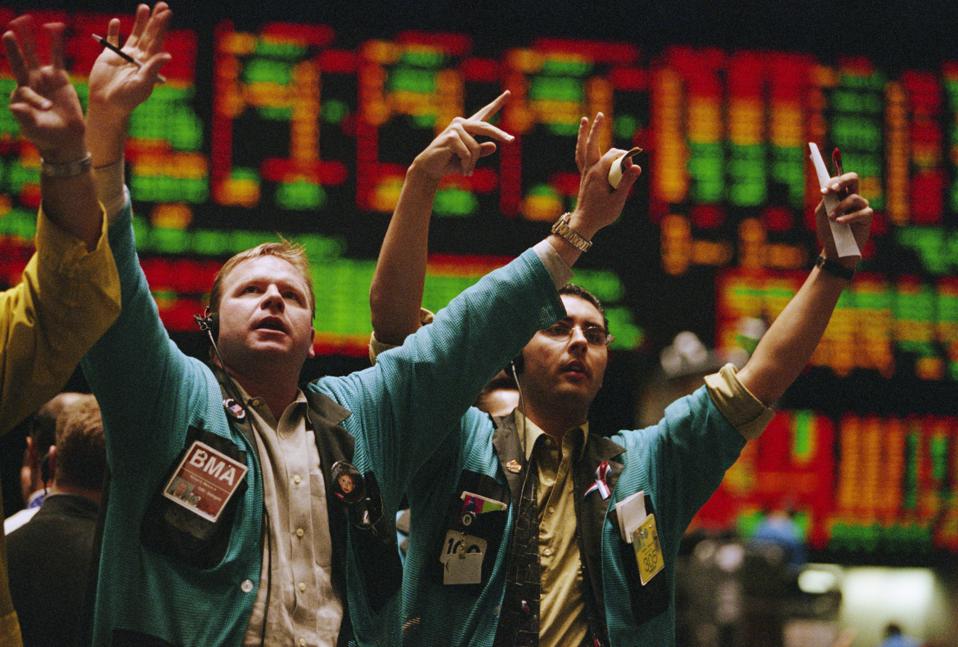 There was more encouraging news last week in the battle against Covid-19, which culminated on Wednesday as Dr. Anthony Fauci made some very promising comments on the prospects for Remdesivir. Its maker, Gilead Sciences (GILD) was pushed back to the April 17 high at $85.79, but did not exceed it, and only closed the week slightly higher.

Market-wide, the sellers took over at the end of the week. After closing at a new high of $2474 on Thursday, Amazon.com (AMZN) dropped to 2283 on Friday. Last week’s analysis suggested that, given the technical readings, the earnings reports from big tech could end the market’s rally.

So what’s wrong with the market’s rally? The price gains have been impressive since the March lows, but as we have seen in past bear market rallies, that is not unusual. The rally in March 2020 started with the best two-day performance since October 1931. That 33.7% rally from the low lasted twenty-four days, as the S&P rallied 33.7% (see chart) on the hopes of Hoover’s new plan for the recovery. Six weeks after the 1931 rally topped out, the S&P was again making new lows. 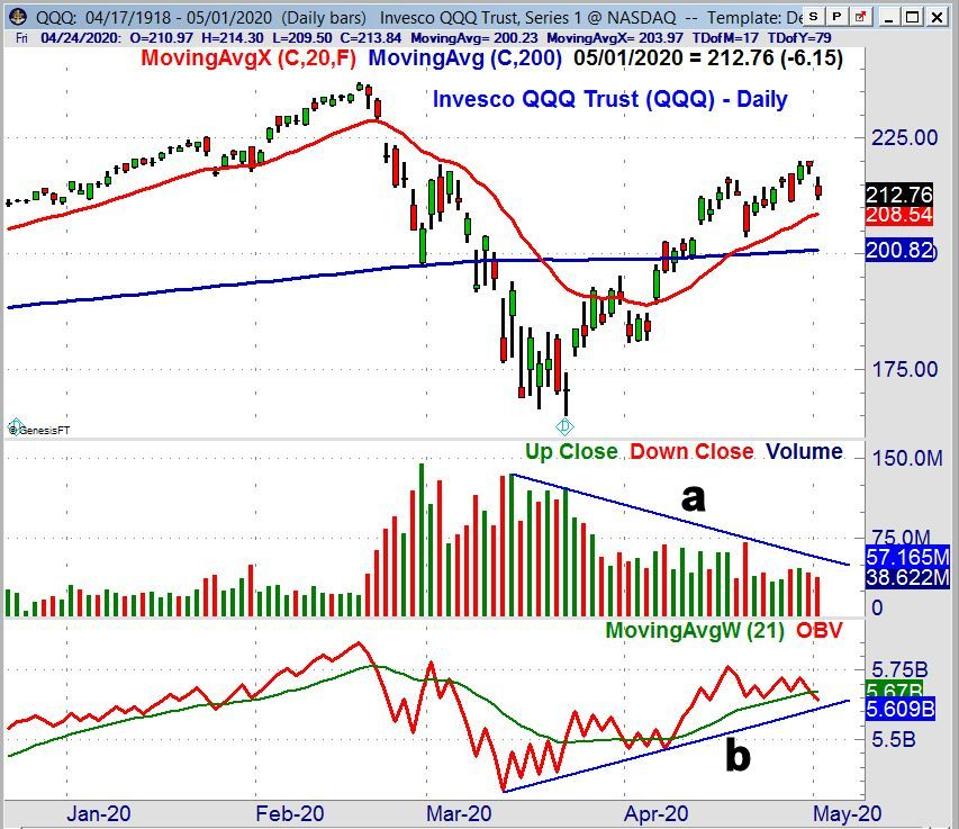 The volume in the QQQ, like that of the Spyder Trust (SPY), has been declining as prices moved higher in April (line a). As QQQ prices were in a strong uptrend, the on balance volume (OBV), has risen less strongly (line b). The OBV dropped below its weighted moving average (WMA) on Friday. 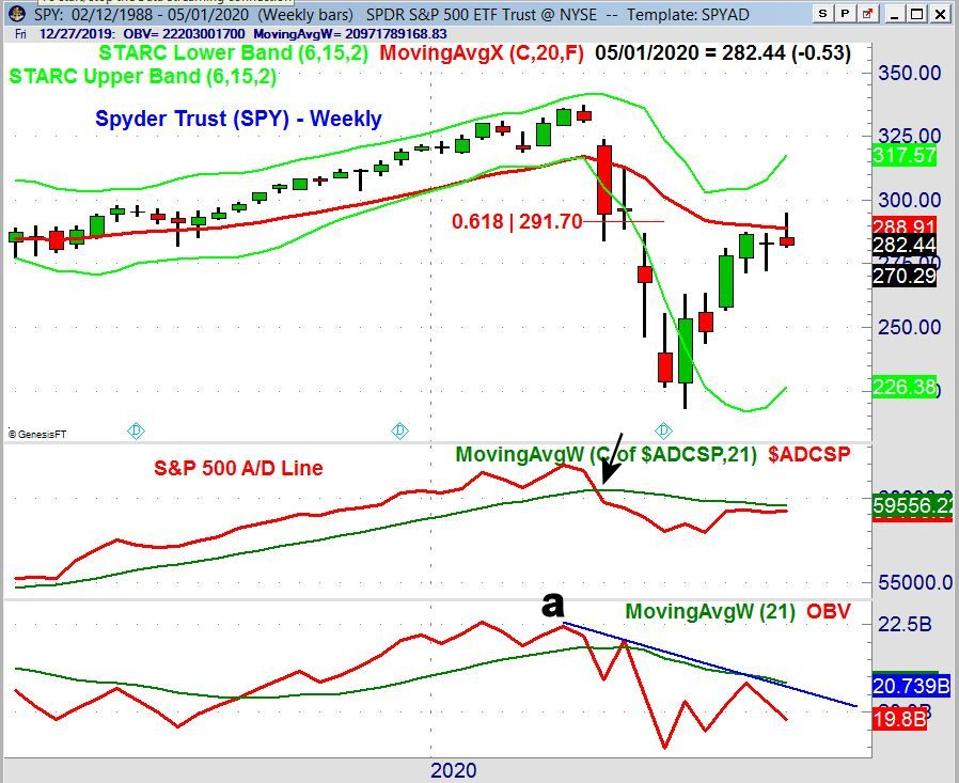 The weekly S&P 500 advance/decline line dropped below its WMA on February 28, and has stayed below it throughout the rally. The daily S&P 500 A/D line (not shown) closed below its WMA on Friday. The OBV rallied back to its declining WMA a week ago, but has now turned sharply lower, which is not a positive sign. 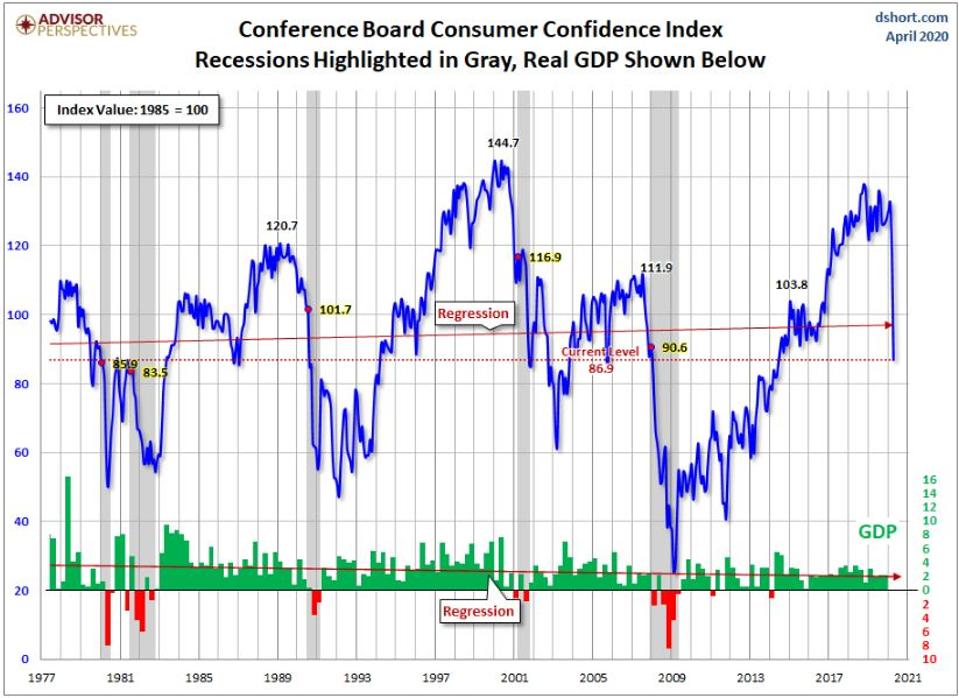 Why might the stock market bulls be turning more cautious? Last week’s economic news was not very encouraging for those who were looking for quick economic recovery. On Tuesday, the Conference Board’s Consumer Confidence came in at 86.9, a bit lower than the consensus estimate. The long term chart from Advisor Perspectives shows that similar sharp declines have often coincided with the start of past recessions.

The Conference Board reported that “Consumers’ assessment of the job market also eroded significantly from last month. Those saying jobs are “plentiful” decreased from 43.3 percent to 20.0 percent. Those claiming jobs are “hard to get” increased from 13.8 percent to 33.6 percent.”

The advance Quarter 1 GDP report on Wednesday came in at -4.8%, worse than the expected 3.9% decrease. This was the largest contraction in twelve years, and the numbers could get worse, as this only the first of three reports on the Q1 GDP. The next report comes out on May 28. Estimates for Quarter 2’s change in GDP range from -27% to -40%. The 7.6% drop in consumer spending, released as part of the GDP report, was the largest in 40 years. I am skeptical that this will recover significantly, even when businesses fully reopen.

Friday’s ISM Manufacturing report for April came in at 41.5, a 7.6-point drop from March’s 49.1 but still above the consensus estimate of 36.9 from Investing.com. As I have stressed in the past, any monthly reading from an economic report is not always significant, as it is the trend that is important. The trend of all economic reports is negative, and this Friday’s monthly jobs report is not likely to help.

On a short term basis, if the selling continues early in the week, there should then be a market rebound. It will take a strong close and further strength from the small-cap stocks to suggest the rally is not over. As the past bear market rallies have shown, these rallies often take longer than most expect. Therefore, a sharply lower close is not necessary this week for the end of the rally to be confirmed.

In my Viper ETF Report and the Viper Hot Stocks Report, I update subscribers with my market analysis at least twice a week, and more often when the markets are volatile. I give specific advice on the long and short side of the market, and I will be watching any market rebound closely.

Can You Pray Coronavirus Away? A New Clinical Study Is Underway

The Coronavirus Ends The Melt-Up For The Dow,...

Alessio Rastani On The State Of U.S. Stocks...