Breaking
Florida Supreme Court Tells The American Bar Association...
How to Write Perfect Paid Social Media Marketing...
How To Boost Productivity In Your Small IT...
How Restaurants Can Design a More Sustainable Food...
Expenses That Small Business Owners Need to Be...
How You Can Make Saying Goodbye To The...
Biden To Meet Royal Family At Cornwall’s Eden...
It’s Going To Be Emotional — Going International...
Peer Mentoring For Students: STEM & Buds
7 PR Trends in 2021: The Story So...
Google Plans Radical New Google Pixel Smartphone Upgrade
Where Did COVID Come From?
Ride To Growth With A Business Vehicle
C3.ai’s Tom Siebel: How To Scale AI
Moz Acquired by iContact Marketing Corp
10 Examples of Brands Using TikTok Stitch and...
Home Business Review: Eminem Makes The Same Mistakes On ‘Music To Be Murdered By’
Business

Review: Eminem Makes The Same Mistakes On ‘Music To Be Murdered By’ 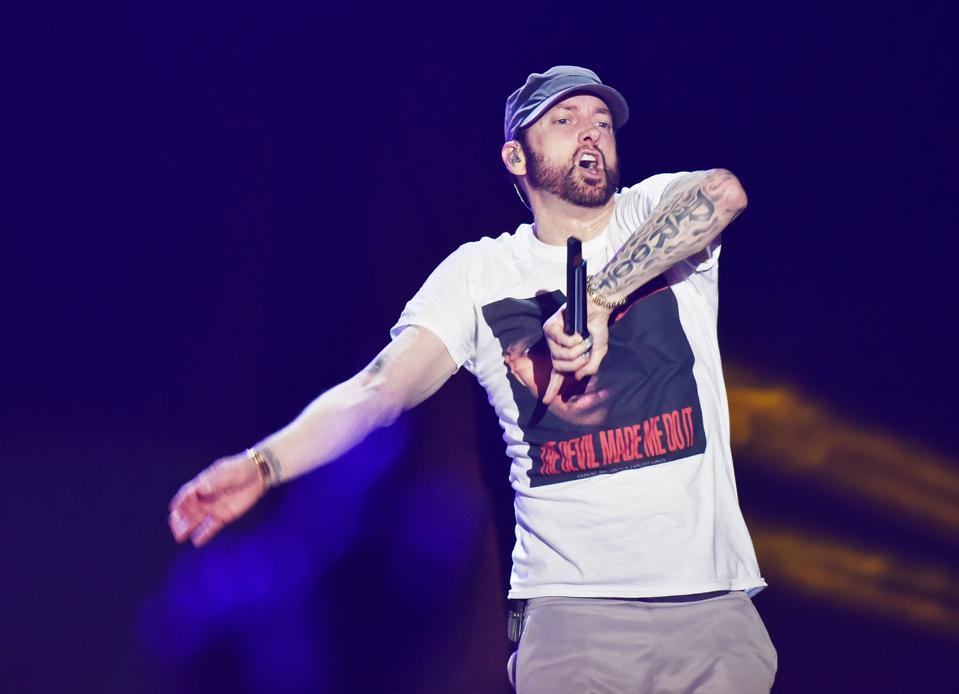 Halsey did nothing to deserve this.

On Friday morning, just as the 25-year-old pop star dropped her third album, Manic, Eminem surprise released his 11th studio album, Music to Be Murdered By, borrowing its title and cover art from Alfred Hitchcock’s 1958 macabre easy listening and spoken-word album of the same name. This is Eminem’s second surprise release in a row after 2018’s Kamikaze, a haphazard but somewhat redeeming follow-up to 2017’s abysmal Revival. And just as the rapper’s release strategy is becoming predictable, Music to Be Murdered By repeats the worst mistakes of its predecessors, including leaden beats, insufferable choruses and tasteless punchlines that are devoid of humor.

Em begins spinning his wheels right off the bat with the prickly “Premonition (Intro),” slamming the critics who panned Kamikaze—which opened with a track slamming critics who panned Revival— and dredging up an incendiary Rolling Stone review of the album. Em’s pissed off because he still gets no respect after 20-plus years in the game and a gazillion album sales, and he’s willing to bet his fellow elder statesman Jay-Z and 2 Chainz feel the same way. But for all the accolades they may share, Jay and 2 Chainz have one virtue that eludes Eminem: discretion. It’s what allows them to keep making consistently entertaining and occasionally forward-thinking albums, while Eminem keeps relishing in years-old grudges and lashing out at writers who make less in a year than he does at the first weekend of Coachella.

That perennial chip on his shoulder keeps Eminem moving, which is why in “You Gon’ Learn” he feels the need to revisit the adversity he experienced as a fledgling white rapper long before the Grammys tried to sit him next to Carson Daly and Fred Durst. The problem is that lately for Eminem, proving oneself is just a matter of spitting bars, bars, bars. He does that on “You Gon’ Learn” and the rest of Music to Be Murdered By with surgical precision. But his Herculean verses typically follow the same blueprint: He opens with the swaggering, slow-drip taunts; then he hits the clipped, word-salad flows that rhyme just for the sake of rhyming; and finally he shifts into his signature hyperspeed, stringing together words so quickly they require a Genius read-through to parse them.

The sheer physicality of it is occasionally breathtaking, such as the final 30 seconds of the Juice WRLD-assisted “Godzilla.” But how many times can Eminem rap about being the GOAT and killing his enemies at unintelligible speeds before listeners tune out? At this point, I would rather hear Eminem rap five words that reveal something about his personal life or emotional state than 5,000 more words of empty chest-beating. This is best demonstrated on frenetic rap-rock track “Yah Yah,” where Eminem verbally contorts himself into a pretzel while the Roots MC Black Thought delivers a gut-busting, effortlessly smooth guest verse that proves to be the finest performance on the album.

Eminem’s confounding lyrical acrobatics might sit better if the instrumentals on Music to Be Murdered By were more palatable, but the rapper’s ear for hooks has only atrophied over time. Half the songs on this album literally sound like nothing on rap radio right now—and that’s not a compliment. The verses of “Stepdad” make for an amusing albeit one-note murder fantasy, but the grating, singsong chorus sounds like it’s trying to parody itself. The enlistment of pop stars only makes things worse, as Skylar Grey injects unnecessary melodrama into the garish rap-rock song “Leaving Heaven,” and Ed Sheeran gets his grubby paws all over the aspiring club banger “Those Kinda Nights,” which sounds like a boneless retread of Liam Payne and Quavo’s “Strip That Down.” Eminem took the radio-friendly pop-rap collaboration to stratospheric heights with No. 1 singles “Love the Way You Lie” and “The Monster,” both featuring Rihanna, but this strategy makes no sense on an album whose sound and aesthetic are clearly meant to re-establish him as a shock-rap provocateur.

But don’t worry: Music to Be Murdered By still has its share of ghastly lyrics that are engineered to spark outrage and grace headlines. This time Eminem finds inspiration in the 2017 Manchester Arena bombing on “Unaccommodating,” rapping, “But I’m contemplating yelling ‘Bombs away’ on the game / Like I’m outside of an Ariana Grande concert waiting.” Do you get it? Because Em’s gonna totally kill the rap game, bro! And if he has to trivialize one of the deadliest terrorist attacks in London history or poke fun at the trauma of a 26-year-old woman to do it, so be it!

Look, I get that rap has no rules, and Eminem has been pulling these stunts for more than 20 years. I know that just by writing about “Unaccommodating,” I’m feeding into his desires and stoking the flames of controversy. But the lyrics themselves aren’t even the problem; I’m used to those. The problem is that six songs later, Eminem swings for the fences with Music’s big “statement” song, “Darkness.” Over a bed of mournful piano keys and Simon & Garfunkel samples, Eminem painstakingly recreates the actions of the gunman who opened fire on the 2017 Route 91 Harvest music festival in Las Vegas. (The video follows suit, making the lyrics even more harrowing.) Eminem conflates the shooter’s preparations with the pre-show ritual of a nervous musician, highlighting the narcissistic streak that runs through so many white, male, domestic terrorists. The song ends with a compilation of footage reporting on the Las Vegas shooting and various school shootings.

“When will this end? When enough people care,” Eminem’s website currently reads below a link to the “Darkness” video. But has he really earned the right to proselytize? Em’s spent the past 20 years glorifying violence and spewing misogynistic and homophobic vitriol; he even does so across much of Music to Be Murdered By. A song like “Darkness” would be a poignant statement coming from another artist, but Eminem doesn’t deserve a reverent, awe-struck reaction. Instead, “Darkness” just contributes to the disjointed nature of Music to Be Murdered By, yet another album in the rapper’s catalog weighed down by warmed-over shock tactics and soulless histrionics. In a career full of headline-grabbing provocations, perhaps the one Eminem can no longer sell is sincerity.